Instability in South Sudan continues to threaten the region 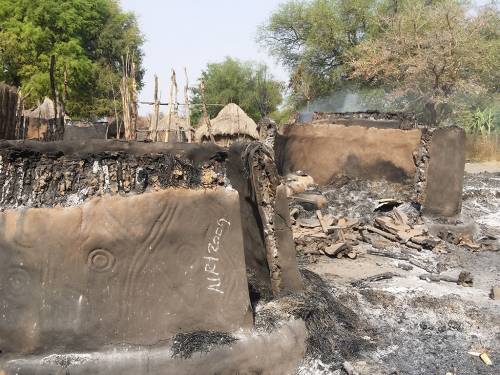 LOUISVILLE – The Ethiopian Evangelical Church Mekane Yesus (EECMY), a longtime Presbyterian Church (U.S.A.) partner, is requesting prayers for victims of violence after several attacks by bandits from neighboring South Sudan in the past two weeks.

Okello Oluch, president of the East Gambelia Bethel Synod of EECMY, recently traveled with church members to Ognogi to offer comfort after an attack that left nine people dead and 16 children abducted, only to learn of another attack while they prayed for comfort. The raids occurred in Gambella’s Gog and Jor areas, which border South Sudan.

“On Sunday, during holy communion, we heard of another attack in Obowa, just 60 kilometers from where we were,” said Oluch. “Armed Murle (a South Sudanese ethnic group) attacked Obowa village killing 11, abducting 22 children and burning 36 houses. It was terrible to see this cruel thing happening to innocent people. Houses were still burning, people were crying and mourning. So many people are in desperate condition with no food or shelter. I am asking you to hold these people in prayer.”

The Rev. Michael Weller, a PC(USA) mission co-worker who teaches at the Don McClure Bible School in Gambella, listened to the stories of students who were directly affected by the attack. But not only did they suggest prayers for the affected communities but also prayers for the Murle people.

Reuters News Agency reported that 28 people in Ethiopia were killed and 43 children have been abducted since the raids began earlier this month.

A peace agreement ending Africa’s longest civil war was signed in 2005 and South Sudan gained independence from Sudan in 2011. Just two years later the country was engulfed by fighting when President Salva Kiir accused then-Vice President Riek Machar of attempting a failed coup. Government and rebels agreed to attend peace talks in Ethiopia in 2014, and a deal was finally signed under threat of UN sanctions against both sides in August 2015.

An ongoing and increasingly brutal new wave of violence broke out in July 2016 and has caused widespread famine. The conflict has displaced more than 3 million people.

In a conversation with Weller, Oluch said the continued destabilization in South Sudan affects security in the border region. The recent attacks have created a sense of insecurity in the Ethiopian Anywaa and Nuer communities located along the border.

“People are displaced because of fear and uprooted from their homes and are not able to prepare fields for planting or able to engage in fishing along the rivers,” said Oluch. “We are facing difficult circumstances that impacts all of our lives. It is Important for us to pray and to respond to the emergency needs of our people.”

Individuals and congregations interested in providing additional support for the EECMY East Gambelia Synod in responding to the needs of survivors of this violence may click on www.presbyterianmission.org/supportwm or send a check to: Presbyterian World Mission, PO Box 643700, Pittsburgh, PA 15264-3700. Checks should be made to Presbyterian Church (U.S.A.), noted for fund ECO E862133 and marked “Assistance for raid victims.”