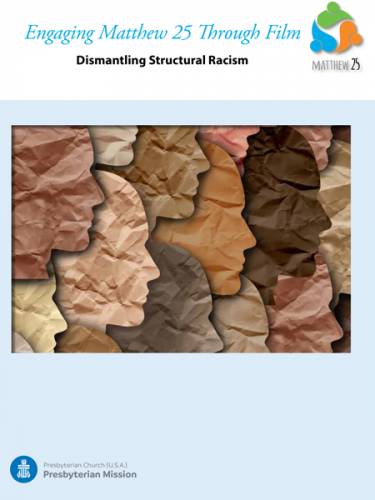 LOUISVILLE — Engaging with Matthew 25 and the three areas of focus that make up the vision — building congregational vitality, dismantling structural racism and eradicating systemic poverty — is being addressed in a variety of ways by the 765 congregations and 72 mid councils who have signed on since its launch in April 2019. Now there is another way to start those conversations and actively engage in the world around us.

“Engaging Matthew 25 Through Film” is a video discussion series that will address each of the three areas, starting with dismantling structural racism. The author of this video discussion series is Dr. Edward McNulty, a Presbyterian minister who for many years was the film reviewer for Presbyterians Today. Three of his 14 books were published by Westminster John Knox Press: “Praying the Movies,” “Praying the Movies II” and “Faith & Film.” There are many more of his reviews of films dealing with racism and social justice issues at visualparables.org.

This first installment of the video series was edited by the Rev. Denise Anderson, Co-Moderator of the 222nd General Assembly (2016) of the Presbyterian Church (U.S.A.) and coordinator for racial and intercultural justice for the Presbyterian Mission Agency.

In the opening, the author addresses racism as both an outer and inner state. “It is outer in the sense that for 400 years, white-dominated society has set the rules and terms for daily living. Even our language is permeated with racism — ‘white’ is pure and good, and ‘black’ is impure and evil. Racism is an inner experience, and it shapes Black people as well, once scarring their psyches with its corrosive poison. This is the process known as ‘internalization,’ whereby Black children accept society’s (white) definition of themselves. But before any people can achieve freedom, they must possess a sense of dignity and worth.”

The video series “is such a masterful piece of work,” said Martin Doblmeier, an American documentary filmmaker known for directing films such as “Bonhoeffer,” “The Power of Forgiveness” and “Backs Against the Wall: The Howard Thurman Story.” “The films chosen are excellent and the graphic illustrations were wonderful, but the way the discussions were framed is truly something valuable. The result is a thoughtful and timely roadmap to use as a way to navigate through a challenging and highly charged time in our country’s racial history.”

The series leads the members of the discussion group through five films that can help them see and understand concrete examples of racism and its effects. “The films force us to see racism as the ugly, concrete evil that affects all of us. Each film tells us a story that draws us in, helping us to feel how racism affects people and, in all too many cases, destroys lives,” McNulty writes.

This study is set up as six sessions, though it could easily be 10 or 12, however the leader(s) choose to frame it. This new resource is available for free digital download here.

“Embracing Matthew 25, and all it calls us to be, enables our church to act boldly and compassionately in a world that yearns and cries out for genuine hope and transforming love,” said the Rev. Dr. Diane Moffett, president and executive director of the Presbyterian Mission Agency. “God has called people of faith to seek justice for those most marginalized in our world. This video series is another way to begin those difficult conversations and start the hard work.”

Matthew 25:31–46 calls all of us to actively engage in the world around us, so our faith comes alive and we wake up to new possibilities. Convicted by this Scripture passage, both the 222nd and 223rd General Assemblies (2016 and 2018) exhorted the Presbyterian Church (U.S.A.) to act boldly and compassionately to serve people who are hungry, oppressed, imprisoned or poor.