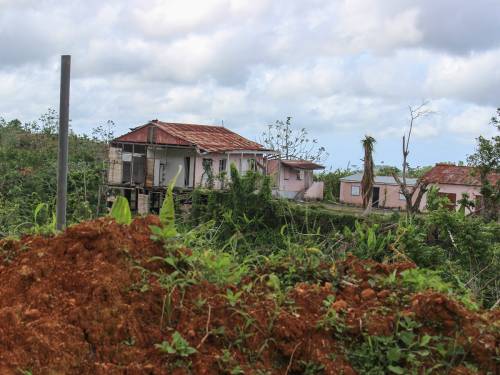 A hurricane-damaged home in the mountains of western Puerto Rico. (Photo by Rick Jones)

LOUISVILLE — The long, slow return to reliable electric service in Puerto Rico following Hurricane Maria suffered a setback on Sunday when an explosion and fire rocked an electric substation. Most of the northern part of the U.S. territory was affected. Authorities say it could take a couple of days to fully restore power.

“It hasn’t been maintained very well. It’s not an up-to-date facility,” said the Rev. Edwin González-Castillo, who served as stated clerk for the Presbytery of San Juan and the pastor of the Presbyterian Church in Vega Alta. “I heard from a friend, a writer for a newspaper, who told me her PTSD came back. She said she felt everything was going back to the way it was during the hurricane. She went to get some gas for her generator and there were already 23 cars in line.”

Gonzalez-Castillo currently serves as a consultant, working with Presbyterian Disaster Assistance in its recovery efforts in Puerto Rico. He says that nearly six months after Maria, people are still on edge.

“I’ve heard from friends who say that if it starts raining hard and thunder comes, they get scared. Before the hurricane, they didn’t have those feelings,” he said. “Now, when the electricity goes out, they feel they’ve gone back to the time of Maria. The lack of electricity or sound of generators affects them emotionally.”

The Category 4 hurricane slammed into Puerto Rico in mid-September of last year, killing more than 100 people, destroying thousands of homes and businesses, and leaving communities without power.

Five months after the storm, Gonzalez says the people have a lot of concern about the upcoming hurricane season.

“There’s still a lot of things that have to be done to be prepared. People are not ready for another [hurricane] season,” he said. “With the economic situation and concerns of what is happening politically, people are scared. They’re losing their jobs, people are leaving the island, there are not enough resources in the area and it’s difficult to continue with normal lives when there are still so many hurdles in the way.”

In the meantime, churches across the island are still struggling to meet the needs of members.

“Pastors are confronting new issues with church members leaving their churches. Offerings are less because people don’t have the money,” said Gonzalez. “People are being conservative with their money. They may have a full church one Sunday and not the next.”

Gonzalez says approximately 40 percent of the island population is still without electricity, especially in the center of the island. Recently, there were rumors the Federal Emergency Management Agency (FEMA) was pulling out. Within 24 hours, Gonzales says the news had spread across the island even though it was not true.

“There are two additional deployments scheduled for this month. Edwin, along with PDA staff member David Myers, will join two volunteers for a detailed volunteer host assessment,” said Jim Kirk, PDA associate for national disaster response. “We are in the process of receiving additional grant requests for Presbyterian disaster coordinator positions as well as additional church damage grant funds.”

Kirk says the PDA Advisory Committee of seven members will hold its next meeting in Puerto Rico on March 21–25. “What we hope to do is to meet with leadership of the presbyteries to discuss next steps and also to meet with several church communities so they can share their experiences and tell us what they see as the best path forward.”

To support recovery efforts in Puerto Rico, click here. You’ll be taken to the PC(USA) website to donate securely and quickly.