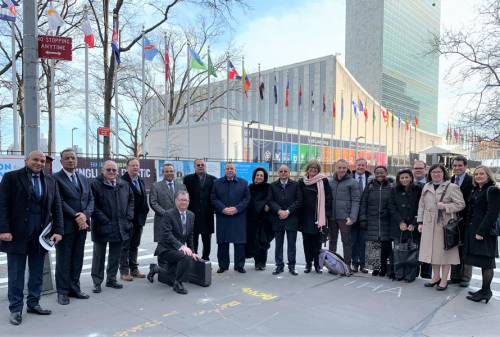 An Egyptian delegation meeting with denominational representatives and officials with faith-based groups is pictured outside the United Nations building in New York City. (Contributed photo)

LOUISVILLE — Representatives from Presbyterian World Mission and the Office of Public Witness in Washington, D.C., along with the National Council of Churches (NCC) and officials from other denominations welcomed a delegation of the Egyptian-U.S. Dialogue Initiative.

Other faith-based groups participating include the Evangelical Lutheran Church in America, the United Church of Christ, Christian Church (Disciples of Christ), and Churches for Middle East Peace, as well as Hands Along the Nile Development Services (HANDS).

The Initiative is an effort led by the Coptic Evangelical Organization for Social Services (CEOSS), a faith-based NGO and World Mission global partner that serves Egypt in the areas of community development and interfaith and intercultural relationships, among many others.

Delegation members include a mix of Muslims and Christians, women and men, representing civil society, journalists, and parliamentarians.

Participants from Egypt include: 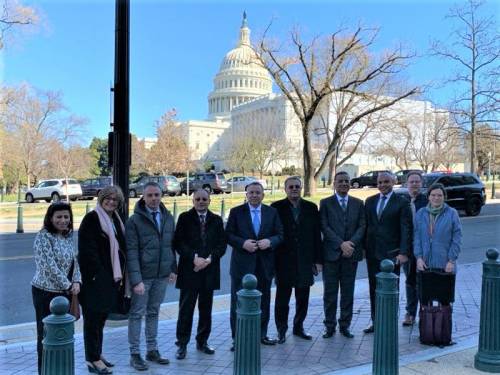 After a time in New York City, the delegation took a train to Washington, D.C. to meet with members of the U.S. House of Representatives. (Contributed photo)

After taking the train to Washington, the group continued its meetings with congressional briefings and breakfast with the Egyptian Ambassador to the U.S., Yasser Reda, and meetings on Capitol Hill with Reps. Vicky Hartzler (R-Missouri), Steve Chabot (R-Ohio), Brian Mast (R-Florida), David Price (D-North Carolina) and Jeff Fortenberry (R-Nebraska). The group also participated in a meeting with Ambassador Sam Brownback, US Ambassador-At-Large for International Religious Freedom, and with the Egyptian leadership team at the U.S. State Department.

“This was my first experience attending the Egyptian-U.S. Dialogue,” said Luciano Kovacs, coordinator of World Mission’s office for the Middle East and Europe. “I am grateful to our partner, the Coptic Evangelical Organization of Social Services in Egypt, to have brought to the U.S. such a distinguished delegation to meet with partners, faith leaders and U.S. politicians in order to hold important conversations that foster dialogue between Egyptians and U.s. citizens on a variety of issues touching people’s lives in both countries.

“It was a great exchange opportunity to enhance the relationship between the PC(USA) and our ecumenical friends in the U.S. with our partners in Egypt,” Kovacs said.