Friends and colleagues mourn the loss and contemplate the legacy of the womanist scholar, who died Thursday at age 88 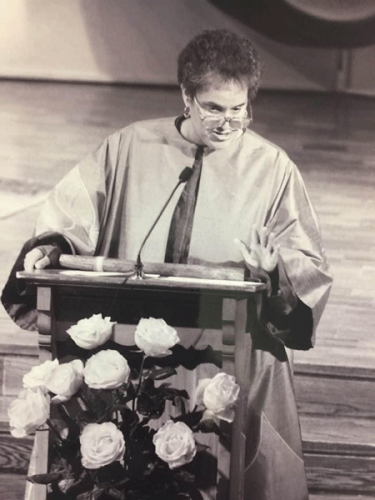 NASHVILLE — Dr. Delores Seneva Williams, a seminal thinker and writer in the development of womanist theology, died at the age of 88 on Nov. 17, said her daughter, Celeste Williams.

Williams’ book “Sisters in the Wilderness” “is the rare book that can truly be called groundbreaking” wrote her editor at Orbis Books, Robert Ellsberg, for the 2018 Trailblazers Conference  held in her honor, in which the Rev. Dr. Katie Geneva Cannon, the first Black woman to be ordained in the Presbyterian Church, paid tribute to Williams’ contribution to womanist theology. Ellsberg said about “Sisters” that “more prolific authors would gladly trade their many publications” for one such “acknowledged classic.” He called the book “a foundational work in womanist theology” that set the stage for “a generation of scholars — not just African American women, but all those who are now exploring the intersectional dimensions of gender, class, race and sexual identity.”

Over the weekend, news of Williams’ death was disseminated over social media and among Presbyterian Mission Agency staff. Many who knew Williams or her work posted remembrances as people awaited an official obituary.

The Rev. Dr. Diane Givens Moffett, president and executive director of the Presbyterian Mission Agency, wrote, “I thank Dr. Williams for helping me understand what it means to be Black and female, working within the Presbyterian Church (U.S.A.) and beyond. Moreover, I thank God for her boldness, for her courage, for her prophetic presence, for her academic rigor and for her gifted insights.”

The Rev. Dr. Alonzo Johnson, coordinator of the Presbyterian Committee on the Self-Development of People, posted a photo of a plaque in honor of Williams that hangs in the hallway at Central High School in Louisville, Kentucky. Williams graduated from Central in 1950. Johnson described how each time he visits the school he takes his daughter, who is a senior there, by the plaque “to remind her of the giants that came before her and for her.” 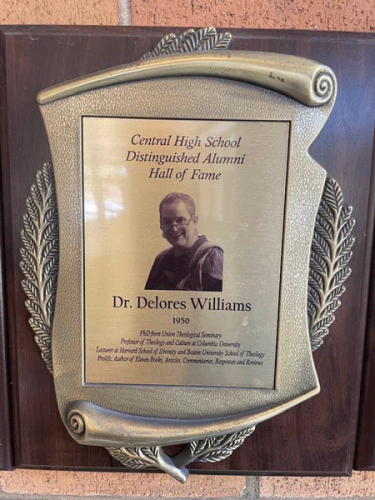 Delores Williams was raised in Kentucky in a family of Seventh-Day Adventists. When she met her husband, Robert, who also had the surname Williams and was a minister in the PC(USA), she became Presbyterian. Delores Williams marched in Alabama during the civil rights movement and experienced first-hand the sexism of its male leadership and the disregard of women’s significant contributions to the movement.

“I am a Black woman — much too short a statement for such a complex reality,” she wrote, describing her process of “self-invention” through the civil rights movement and engagement with feminist theology, in her chapter of the 2004 book “Transforming the Faith of Our Fathers.”

Williams was deeply influenced by the work of Alice Walker, from whom she first heard the term “womanist.” Walker’s vivid descriptions of Black women’s experience provided the material upon which to construct a Black woman’s theology when Black liberation and feminist theology felt exclusive. Through Walker, Williams saw how “Blackness, womanness, spirituality, survival and freedom” offered Black women a way of understanding themselves within community while also respecting their calling to separate themselves “when women’s health was at stake.” 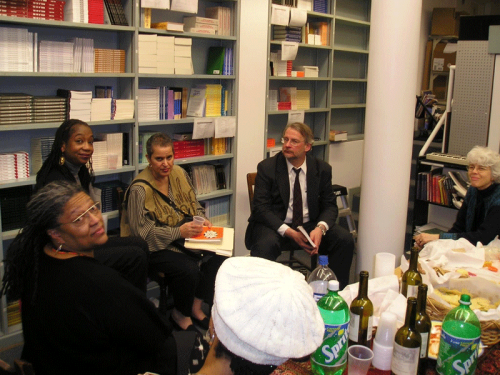 Betty Bolden, her friend of 40 years, described the moment when Williams visited her in Burke Library at Union Theological Seminary to tell Bolden that Walker had appeared to her in a dream. Walker was pregnant and asked Williams to help her carry what it was inside of her that needed birthing. At the time, Williams was pursuing her doctorate in systematic theology in consultation with James Cone, Tom Driver and Beverly Harrison. She persisted in completing her PhD and the dissertation that would become “Sisters in the Wilderness” through many interruptions, including commuting from out of state, changing advisors, caring for her four children and the sudden death of her husband. Bolden remembers the impact that the sudden loss had on Williams and how her shift to being a single mother of four crystalized Williams’ focus on survival as essential to Black women’s rendering of liberation.

Williams’ understanding of Black women’s liberation began by naming the multiple layers of structural oppression that Black women experience. She described the liberation of Black women as an “archeology,” which meant taking seriously the religious practice and language of “my mother, her mother and her mother’s mother — the slave.” It is through their experiences and in conversation with Black women in churches that Williams understood that Black women carried a “memory of brokenness” that could not be ignored.

Williams pushed back against the centrality that the cross played in Black liberation theology and the impact that justifying violence had on Black women’s lives. Williams’ critique of atonement theory in particular caused waves, especially out of the Reimagining Conference of 1993 in which she played a seminal role, according to colleagues. Students who studied at Union when both the Rev. Dr. James H. Cone, founder of Black liberation theology, and Williams were professors describe the thrilling experience of being formed by the theological tension that existed between two brilliant thinkers. On the 25th anniversary of “Sisters in the Wilderness,” Ellsberg, her editor, described the book that Williams had always promised to write, but never completed, to be her critique of atonement theory. Later that year, Cone wrote in a memoir that it was Delores Williams’ critique that inspired him to write “The Cross and the Lynching Tree.” 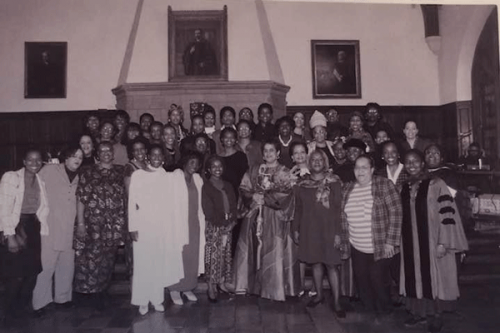 While at Union, Williams trained in community organizing and joined the conversations of Harlem Initiatives Together, a chapter of the Industrial Areas Foundation, the nation’s largest and longest-standing network of local faith and community-based organizations. According to Bolden and Walton, there she listened deeply to the needs of her neighbors who were experiencing poverty. “She spoke a language everyone could understand,” Bolden remembered, “so everyone wanted her to speak at their churches and she was generous with her time,” while also noting how Williams taught her and others the power of saying “no” — of not making oneself available to every request or demand on her time. As an example of Williams’ commitment to letting her “yes be a yes and her no being a no,” Bolden explained that when in the mid-1990s Williams joined St. James Presbyterian Church in Harlem, Williams gave her time to teaching Sunday school to elementary school children but never sought to be ordained an elder and serve on session.

The Rev. Dr. Cláudio Carvalhaes, the current Professor of Worship at Union and a teaching elder in the PC(USA), called her “the most incredible thinker at Union” because of the “expansiveness of the existential way she saw life.” Carvalhaes, who took Williams’ classes on Paul Tillich and women’s ritual ways of knowing, said that Williams mixed theological rigor, the truth of Black women’s experiences, the eyes of a poet and also the best aspects of Presbyterianism, noting the “always reforming” nature of a theology grounded in a hermeneutic of lived experience.

“She started in a place of respecting the heart of each human being,” said Dr. Janet R. Walton, Professor Emerita of Worship. Walton, who co-taught for many years with Williams at Union, described how Williams’ approach of beginning by listening to the experiences of women across race and class often put her at odds in the field of systematic theology. Williams held the Paul Tillich Professor of Theology and Culture at Union for about a decade. 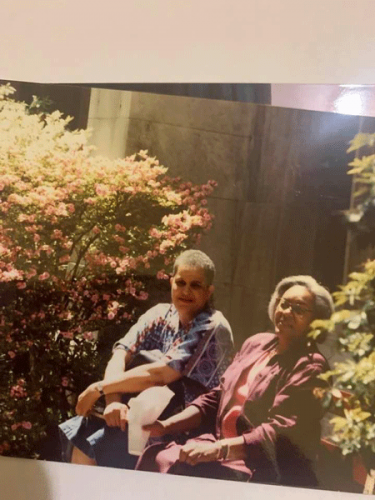 Williams is remembered by friends, professors and former students as a community builder and a welcome host for conversation. Bolden describes how, even before her doctoral studies, Williams, who was working part-time in Burke Library, created space for conversation amongst women while her husband pursued his PhD at Columbia-Union. These conversations were the roots of the first Black Women’s Caucus at the seminary. Students who studied with Williams remembered the dinners she hosted for all her advisees and how they were based on sharing stories of surviving their life before and during their academic studies. The Rev. Winnie Varghese, rector at St. Luke’s Episcopal Church in Atlanta, remembered how Williams “told stories of getting up at 2 a.m. to get the writing in before the family woke up” as she encouraged her students over dinners in her seminary apartment.

In a 1985 article for The Journal of Feminist Studies in Religion, Williams wrote, “All women regardless of race or class have developed survival strategies that have helped [them to] arrive sane at [their] present social and cultural locations.” She said that “feminist-womanist-mujerista and Asian women” need to “remember, commemorate, and lift up for ourselves and subsequent generations of women the resistance events and ideas.”

“While a student at Union Theological Seminary, it was an honor to sit at the many different tables she set on campus and in the community,” wrote the Rev. Dr. Gay L. Byron, Professor of New Testament and Early Christianity at Howard University and co-editor of “Womanist Interpretations of the Bible: Expanding the Discourse.” “In the classroom, her brilliance and theological vision inspired me to claim a womanist hermeneutic and flesh it out in ways that are still bearing fruit today. In her home, she provided space for me and other students to dine, to share our experiences, and to bask in her warmth, hospitality, and encouragement. And in worship spaces –– on campus and at the church we both attended in Harlem –– she offered her poetic way with words and showed me that the best sermon is the one we bear witness to with our lives.”

“Delores was a poet first,” Bolden explained when describing how, in addition to her contribution to womanist theology, her friend could be remembered. She noted the project Williams’ children may have before them in publishing a posthumous collection of her poetry.

“Imagination and improvisation were her starting points,” said Walton, who also explained the meticulous and poetic way in which Williams wrote materials for articles, journals and their joint classes, including one in which novels and memoirs by women across the globe were used as source material for theological reflection and the creation of rituals. In these classes and her later years at Union, Williams introduced the term “organic theology” to describe her approach to a way of sharing stories of survival, developing communal means of resistance and envisioning shared liberation. Like her unfinished critique of the atonement, little documentation of her approach to organic theology remains. Walton attributes this to its experiential principles, which are situational and ephemeral — rituals and communal gatherings where stories are shared and probed. Carvalhaes remembers a single-page document where Williams outlined organic theology for her students: “Curving around its left-hand corner was a sketch of a feather,” he said as he mourned its disappearance from his files.

After experiencing health problems including a back surgery, Williams retired in 2004 from Union and moved to Kentucky to care for her mother and sister before moving to Nashville to be closer to her children. She is preceded in death by her husband, Dr. Robert C. Williams, and her eldest daughter, Rita Williams-Seay. She is survived by three of her children: Celeste Williams, Steven Williams and Leslie Williams. An obituary and details of her memorial service are forthcoming.