Make A Donation Click Here >
Home › Despite many challenges, Christmas is celebrated in the Holy Land

Hope coupled with fear meet in the streets of Bethlehem

BETHLEHEM — If ever the world — and Bethlehem — needed a little cheer, it’s this year.

With the omicron variant of the coronavirus spreading rapidly in various countries throughout the world — including Israel and the Palestinian Territories, and with Israel closing its airport to foreign visitors and tourists yet again — there is little comfort and joy to be found.

In spite of what looks to be yet another dismal Christmas, on Dec. 4 the very tall Christmas tree which adorns Manger Square each year was lit, followed by a display of fireworks. The crowd that thronged the square was made up mostly of Israeli Arabs who came from the Galilee region of the country to witness the lighting, as well as local Palestinians from Bethlehem and the surrounding villages and cities.

To attract people and foot traffic back to Star Street, the traditional entrance into Bethlehem, a Christmas market was held. Local vendors sold such items as Palestinian embroidery, homemade crafts, cookies, olive wood items and the like.

Hope, coupled with fear, still meet in the streets of today’s Bethlehem. The lack of tourists to the city has caused a huge economic downturn, as hotels, souvenir shops, restaurants, tour guides and bus drivers have all been affected.

Three gates in Israel’s Separation Barrier/Wall, which all but surrounds the town, are opened three times a year to allow the Latin Patriarch, Greek Orthodox Patriarch and the Armenian Patriarch to travel the traditional route into Bethlehem and to pass in front of Rachel’s Tomb, which itself is now encircled by the wall.

Israel began construction of the wall in 2002 following a suicide bombing in the Israeli coastal city of Netanya, which killed 30 Israelis at a Passover Seder dinner at a hotel. Israel claims it needs the wall for security reasons. Palestinians have called it a land grab. Families who own land and olive trees on the opposite side of the wall can no longer access their olive trees nor their land.

The entrances and exits to Bethlehem are controlled by Israel, and a long line of cars and vehicles can often be seen sitting and idling, waiting their turn to exit the city.

Christmas is celebrated three times in the Holy Land. First, December 24 and 25, which is considered the Western (Catholic and Protestant) Christmas; January 6 and 7, which is Orthodox Christmas, and finally January 18 and 19, the dates for Armenian Orthodox Christmas. 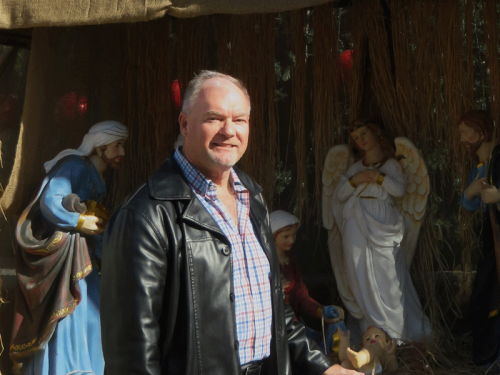 On the three subsequent Christmas Eves, sirens and flashing lights can both be seen and heard, as clergy, dignitaries and embassy and consulate officials from Jerusalem and elsewhere are ushered to and from the Church of the Nativity by Palestinian security forces.

Since December 1995, Christmas has largely been a Palestinian affair.  At that time, the late Yasser Arafat made his first appearance in the “little town” on Christmas Eve by way of helicopter, and to a Manger Square packed with people to witness his arrival.

Each year on Dec. 24, Scout troops from Bethlehem and the surrounding cities parade through the town, playing Christmas carols on their musical instruments.

Douglas Dicks is Presbyterian World Mission’s Associate for Ecumenical Partnerships in Israel/Palestine, serving with St. Andrew’s Scots Memorial Church in Jerusalem and other partners in the region.