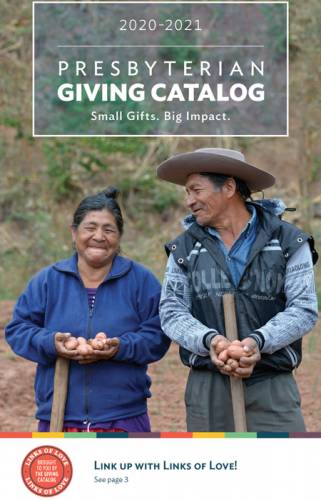 LOUISVILLE — With nearly all of her trips to see family and friends temporarily on hold during the pandemic, Lucy Janjigian simply lets her fingers — and her imagination — do the walking, straight through every colorful page of the Presbyterian Giving Catalog.

“I don’t really remember exactly when I first got started with the catalog,” said Janjigian, who regularly supports Presbyterian mission by donating specially chosen catalog items to both honor and inspire her loved ones. “I enjoy these things. I especially like when you see a picture of the project and you see where it’s going.”

Now in its seventh year, the Presbyterian Giving Catalog — which is available both in print and online — is filled with a wide variety of gifts that provide real and positive impact around the world, including aid for refugees, access to clean water and ways to end hunger.

For Janjigian, who was born of Armenian descent in Jerusalem, Palestine, the Presbyterian Giving Catalog has the power to transport the longtime hunger action advocate and peacemaker to places near and far with needs she understands all too well from her girlhood in the Middle East and her later travels to countries including Rwanda and Madagascar with the Presbyterian Peacemaking Program.

“I come from Palestine, where water is very precious,” said Janjigian, who with her late husband resettled in the U.S. in the summer of 1958 as a result of increasing instability in the Middle East.

“When my mother would come to visit us, she would say, ‘Don’t let anybody but me wash the dishes because they waste so much water by keeping it running,’” she said. “None of us could ever see water being wasted because we’re from Palestine, where water is scarce.”

Such formative experiences were precisely why the catalog’s garden well project — providing families with a reliable and convenient source of clean water for drinking, bathing, washing and irrigating — first caught her attention.

“When it came to wells,” she said, “I figured instead of giving my grandkids each a gift they don’t need, let me just put the monies together and dedicate it to projects for people who could use it.”

Like her own children and grandchildren, Janjigian thinks that most people simply have too much.

“When members of a women’s group told me that they’re already thinking of exchanging gifts at Christmas this year, I said, enough,” she recalled. “I already have so much that I don’t want anything, and I’m sure you do, too. So, let’s put together the money that we were going to give to each other, and have it mean something to someone in need rather than your giving me something that I don’t need. I’m just always very aware of that.”

The 2020-2021 catalog, which was mailed in September to every PC(USA) congregation, offers a total of 44 gift options organized into seven categories of need and interest: kits and tools, relief and assistance, water, empowerment of women and girls, livestock, education and formation, and agriculture. Its pages contain everything from farming tools for a family in the developing world to a deep rock well, suitable for those parts of the world where clean water is only found hundreds of feet below the Earth’s surface.

New to this year’s catalog are a fishery kit, Mzuzu drill, family nutrition starter pack, sapling set, rice seeds and community garden, another project that resonates with Janjigian. Most donors to the catalog give gifts that represent a cause that’s close to their heart. 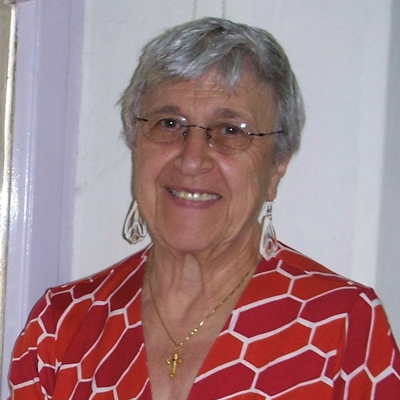 “Where I live on the second floor, I have a small balcony that I filled with plants,” she said. “They’re all from cuttings and they’re growing wild — I love it. From mid-April to mid-May, when the caterpillars come all the way up the wall, I’ve been collecting them, putting them in jars, covering them with netting and feeding them.”

As it turns out, collecting caterpillars is a hobby that she shares with one of her two great-grandsons, now four years old.

“It’s amazing that he’s so interested in caterpillars and butterflies, because that was my hobby when I was a young girl in Jerusalem,” she said. “Could it be inherited?”

Janjigian is also a collector of what she hopes are teachable moments as she seeks to model and cultivate a spirit of generosity and gratitude in her children, grandchildren and great grandchildren.

“I keep the Presbyterian Hunger Program box on my dining room table that I put money into,” she said. “When guests ask me about it, I will tell them. One time when my grandchildren were visiting, my youngest granddaughter was so precious — she went out quickly and came running back to the table with a five-dollar bill to put in the box. Nobody had ever put five dollars in there before. I told her it’s for Presbyterian Hunger, for hungry people. She understood and had compassion for the hungry.”

Another grandson recently gave money to the Armenian Missionary Association of America in loving memory of his grandfather, which he has committed to do every month. “I thought that was lovely,” she said. “Since he is now earning his own money, he is happy that he is able to do this.”

Nurturing both church and family ties is important to Janjigian, who moved from New Jersey to California six years ago to be closer to her daughter. Although she is a member of Sunnyvale Presbyterian Church, she continues to attend virtual gatherings with members of her former home congregation, West Side Presbyterian Church in Ridgewood, New Jersey.

Although Janjigian said that her financial resources are somewhat scarcer this year, she still intends to give whatever she can.

Certainly she will continue giving the gift of piglets through the Presbyterian Giving Catalog in honor of her two great grandsons, which she has done annually at Christmas since her older great-grandson was born.

Regardless of what the future holds, Janjigian is always ready for God’s next challenge.

“Whether I like it or not,” she said, “I’ll get involved somehow!”