Migrants are often treated with little concern for their health, dignity 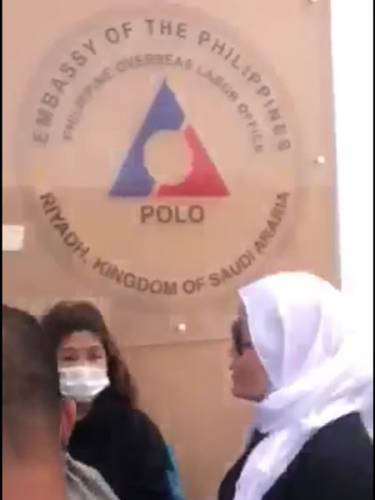 Filipino workers at the Philippine Overseas Labor Employment Office in Saudi Arabia are asking for food assistance since many workers suffer from a “no work, no pay” policy. Many were denied assistance. (Photo provided by Rev. Cathy Chang, courtesy of global partners)

LOUISVILLE — Migrants are one the most vulnerable groups identified in the COVID-19 crisis, but especially so in the Philippines, where about 10 percent of the 100 million total population lives or works abroad because of poverty and lack of employment.

In fact, there are so many overseas Filipino workers that the acronym OFW (Overseas Filipino Worker) has been added to the newest edition of the Oxford English Dictionary.

In the 1970s, OFWs, primarily men, left their country to work in construction and on oil rigs in the Middle East. Since then, many women have joined the overseas workforce, primarily as domestic help in Saudi Arabia, the United Arab Emirates, Kuwait and Hong Kong. Filipinos also represent the largest number of international workers at sea.

There are close to half a million Filipino seafarers on cargo ships, cruise ships, fishing and other vessels on the world’s oceans at any given time, making up to one-third of all crew members on maritime vessels.

The plight of migrants working in the cruise industry came into international focus when the Diamond Princess cruise ship made headlines around the world. During the quarantine period, and often with limited protective gear, they cooked and served passengers meals, washed their clothes and carried out requests that passengers posted on their cabin doors. They were also the last ones allowed to leave the ship. More than 700 people tested positive for COVID-19 on the Diamond Princess, 80 of whom were Filipino crew members. Six people died.

The Rev. Cathy Chang, World Mission regional facilitator for addressing migration and human trafficking, and other PC(USA) global partners such as Migrante International are working together to identify the groups that are most at-risk and band together to help.

Migrante has been one of the organizations leading the way in advocacy. On March 14, Migrante Northern California and the National Alliance for Filipino Concerns (NAFCON) joined several Bay Area-based labor unions for a press conference. The groups raised concern about the treatment and well-being of the more than 500 Filipino seafarers aboard the Grand Princess as well as the thousands of passengers who were at risk of exposure to a COVID-19 outbreak onboard. The ship, anchored 10 miles off the coast of San Francisco, was finally allowed to dock at the Port of Oakland on March 9 and remained there until March 15.

While measures to disembark passengers were immediately attended to, the foreign workers were kept aboard the ship. “Workers were being treated with less concern and dignity than the passengers who were disembarked first. There’s a need for transparency, cooperation, and government action for humanitarian relief and the health and safety of everyone — the passengers, the foreign workers, the port workers, and the surrounding community,”  said Terry Valen, President of NAFCON and executive director of the Filipino Community Center in San Francisco.

During the press conference, a video was shown featuring photos and interviews with those working on the ship. Their names were withheld for protection.

On March 27, a group of workers released an open letter addressed to the government, their employer, Princess Cruise Lines, and to their manning agency, Magsaysay Maritime Corporation, asking for testing before being repatriated back to the Philippines. It didn’t happen. On the evening before they were released, they appealed again. None of the phone numbers for the Philippine Department of Health were being picked up. On March 30, they were flown back to the Philippines.

“On March 28, I began to feel dizzy,” said one worker. “I asked for medical attention and my calls were not answered. I have returned home still dizzy, still with high blood pressure and still untested.”

Migrante asks that U.S. Presbyterians advocate with their state and city leaders to ensure all migrant workers regardless of status receive masks, soap and alcohol to protect themselves, especially migrant workers who do not have their own homes or live with their employers like domestic workers or caregivers. Churches can also be a safe place where migrants can pick up donated masks and alcohol.

Because of the nationwide quarantine measures, many of the Filipinos brought back to the capital city, Manila, cannot travel to their homes. Nor can many Filipinos who work in other countries get back to continue their work. According to government statistics, about 5,000 people have tested positive for the virus. There have been more than 300 deaths, including a 23-day-old baby.

“The Diamond Princess is one cruise ship, and now other ships are trying to dock in port U.S. cities and around the world,” Chang said. “Even before the pandemic, these seafarers and other Filipino migrant workers around the world were vulnerable to abuse and discrimination. Our partners are committed to ensuring the government provides migrants with testing and protections.”

“As people of faith, let us pray and provide support for our migrant brothers and sisters in concrete ways,” she said.