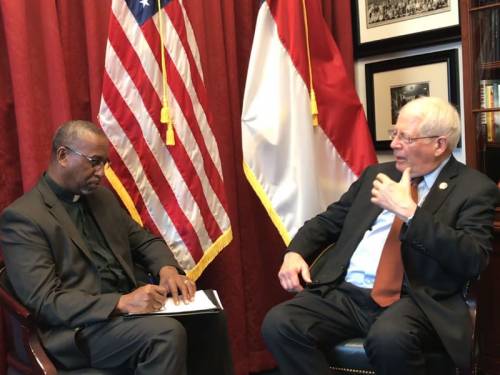 The Rev. Jimmie Hawkins of the Office of Public Witness in Washington, D.C., at left, interviews U.S. Rep. David Price of North Carolina’s Fourth District for the second installment of the Faith & Politics webinar series.

LOUISVILLE — As a student at the University of North Carolina at Chapel Hill decades before being elected to the U.S. House of Representatives, David Price saw racial barriers begin to fall as a result of the civil rights movement.

“It really was a movement that changed people’s hearts and minds and changed them enough to where the politics of the country responded, and so that’s been kind of the gold standard for me,” said Price, who represents North Carolina’s Fourth District.

“You want to have that kind of connection between your faith, your moral sense and politics,” Price told the Rev. Jimmie Hawkins, “and you want to be able to act on that (and) be effective.”

Price was interviewed for the latest episode of “Faith & Politics,” a webinar series of the Presbyterian Church (U.S.A.) Office of Public Witness. The series is designed to engage members of Congress and other officials in conversations about their faith and how faith impacts their work.

Price is a Christian and outspoken Democrat with a penchant for social justice who’s spoken out about various issues, including education, gun violence prevention, the country’s affordable housing crisis, gentrification of neighborhoods and what he has referred to as President Donald Trump’s punitive approach to immigration.

Price’s positions are informed by his faith as well as his intellect. He’s a member of Binkley Baptist Church in Chapel Hill, and his degrees include a Bachelor of Divinity from Yale, where he also received a doctorate in political science.

“I think politics is one of many realms of social life where you either live out your faith or you don’t,” he said. “I think it’s very important to think hard about what your faith requires of you.”

Price grew up in a small, white, insulated town in east Tennessee with almost no diversity. He later aligned himself with the civil rights movement after arriving at the University of North Carolina at Chapel Hill as an undergraduate.

The transformation was the result of “coming to Chapel Hill in 1959 and experiencing so much intellectual and religious stimulation and being encouraged to think through things just as the civil rights movement was unfolding before us,” Price told Hawkins.

During that time, “Religious groups took the lead in picketing the theaters and desegregating public establishments and that was my first interfaith experience … and we took our turn on the picket line and we saw some results,” he said.

That gave participants a sense that politics actually can work and government actually can respond, said Price, who witnessed the passage of the Civil Rights Act a few years later.

“That’s 1964. That’s only three years after we were on the picket line at the varsity theater in Chapel Hill,” Price noted. “Nothing happens that fast in politics anymore or usually ever.”

Since then, however, the country has continued to wrestle with race, even after electing its first African American president, Barack Obama, in 2008.

After that election, “I was elated. I thought he was a remarkable figure,” Price said.

But “a week or two after he was sworn in, I had a town meeting in my district and it was brutal,” he said. “Just virulent. There were some racial things just below the surface. … I was shocked and brought down to Earth very quickly. It was the tea party before the tea party, and it was an early signal to me that this was not going to be a very smooth ride.”

Price said it’s hard to generalize about the country’s racial climate today since it varies from place to place and even from county to county.

However, when the conversation turned to another fairness issue — religious people displaying homophobic signs during a protest, as observed by Hawkins — Price said there are “some blatant contradictions to the very simplest, most basic precepts of faith.”

Hawkins noted the Reformed church believes in the importance of studying Scripture rather than blindly following others.

Price said he would like to see religious communities talking to each other more, noting that there is some common ground to be found.

“I would say the immigration issue right now is one that people of all political stripes find some resonance with their faith,” Price said. “I’d say the same thing about stewardship of the Earth — the environmental movement. That’s what comes from not just professing faith but really thinking about your faith. Thinking about what the content of that faith is and particularly the moral imperative that comes from it.”

Price went on to say, “I’ve tried in a conscious way to relate faith and morality and not in a sectarian way but appreciating our theological and philosophical traditions. What do they imply for our politics and then how can we reason together about these things?”