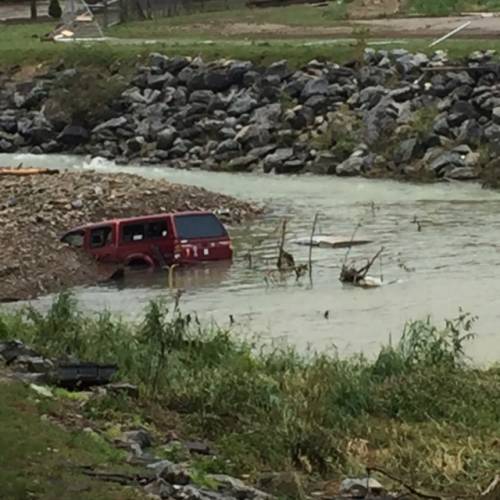 A pickup truck is left partially submerged in the aftermath of flooding in West Virginia. (Photo by Phillip Darby)

LOUISVILLE – Controlled chaos. That’s how Joan Stewart, executive director of the West Virginia Ministry of Advocacy and Workcamps—the long-term recovery response arm of the Presbytery of West Virginia—describes flood-damaged communities nearly two weeks after record flooding. The water has receded, but the clean up is just ramping up.

“A lot of folks have gotten things carried to the curb and are now in the process of seeing what FEMA (Federal Emergency Management Agency) is going to be able to do,” said Stewart. “A lot of initial mucking has been done including the tearing out of floors and walls. Those things are being done now as they evaluate what can be done to bring repairs to their homes.”

The flooding severely damaged or destroyed more than 1,200 homes and businesses, leaving as many as 23 people dead. Volunteer teams quickly organized and immediately began clean up and relief efforts.

“What the Presbyterians chose to do in 2002 is to be long-term recovery response. Once all of the first responders go home, we’re in it for the long haul,” said Stewart. “Once assessments have been made, we go in and start with home repairs, whether working with families with FEMA insurance or those with no other resources. Our goal is to get their homes back to where they were before the flood hit.”

Pastoral care has been an important part of the clean up effort according to Stewart. She says teams have been onsite to listen and pray with families impacted by the high water.

“The amazing thing we see with so many people is the resilience, where people will say they appreciate what we’re doing but urge us to check on others down the road who may be worse off,” she said. “The truth is; no one is better or worse off than the next. So many people think beyond themselves in times of crisis and it is an amazing thing to see. West Virginians are resilient.”

“It will be months, maybe years, before these people are able to return to their homes. PDA is planning to respond to this disaster as a long-term recovery event. Some of PDA’s responses will include working with National VOAD (Voluntary Organizations Active in Disaster) partners and FEMA, hosting volunteer work teams and providing emotional and spiritual care workshops, including Compassion Fatigue training for those who have been working with survivors for long periods of time,” said Rick Turner, PDA associate for national disaster response. “PDA will continue to help the people of West Virginia until the work is done or until resources run out.”

Click here for more information on the flooding in West Virginia.