by World Council of Churches, additional reporting by Gregg Brekke 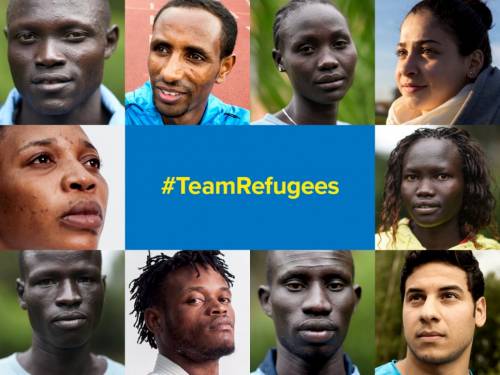 RIO DE JANEIRO – As many in the world observed and cheered the Rio 2016 Olympic Games, church leaders spoke out in support of the Olympic refugee team and the place of public honor it offered for refugees competing in the games.

In the United States, the Presbyterian Mission Agency, a ministry and mission arm of the Presbyterian Church (USA), a World Council of Churches (WCC) member church, called on the membership of the church to support “Team Refugees.”

“The life of a refugee during these times is scary. They’ve lost their homes, their countries and live in this kind of limbo existence,” said Susan Krehbiel, associate with Presbyterian Disaster Assistance.

“This is a very big deal. As people of faith, we understand our connection as one human family,” said Krehbiel. “Until now, this group has not been represented in one of the most unifying events in the world.”

The Olympic refugee team marched with the Olympic flag immediately before host nation Brazil during the opening ceremony. The team had its own entourage including five coaches and five team officials. The group is staying in the Olympic Village alongside all of the competing athletes.

As the Olympic games have commenced, the personal stories of refugee team members have inspired people all over the world. Kenyan world-record-winning runner Tegla Loroupe was selected by the International Olympic Committee to head the refugee team.

While refugees shared their stories of triumph over adversity, many also said they still hoped to represent their home countries someday, and called for an end to the conflicts and humanitarian crises that caused them to flee their homes.

Several church leaders expressed hope that the team’s participation in the games would only be uplifting to refugees but would also inspire people to open their hearts and home countries to refugees, as well as support peace-building efforts to create a world in which refugees could return home.

In Leeds, United Kingdom, a congregation of another WCC member church, the Church of England, promoted a recording with almost 200 singers of an unofficial Olympic anthem for Team Refugees called “The World Is Our Song.”

The presence of WCC member churches in Rio during the Olympics is very diverse. In Copacabana, Rio’s most famous beach, a Norwegian-Swedish Christian venue was created to not only welcome church members but to foster dialogue about refugees and bridging cultures.

Besides creating a space for welcoming church members, and encouraged by the need for reflection and dialogue about the current refugee crisis in Europe, the Seaman’s Church is organizing seminars at the Norwegian Consul General on the subject “When our values meet a foreign culture.”

The Evangelical Church in Germany (EKD) also offered a spirit of accompaniment for athletes and spectators. The EKD co-sponsored the presence of an ecumenical delegation formed by ministers from both the EKD and the Roman Catholic Church in Rio to accompany the German delegation. Since 1972, Catholic and Protestant churches have appointed pastors to the Olympic games.

For the Rev. Rolf Rieck, pastor of a small congregation of the Evangelical Church of the Lutheran Confession in Brazil (IECLB) in downtown Rio, “the Olympic values prevail when we show ourselves open to welcome our neighbors and we act as God’s instruments for transformation and new hope for all,” he said.

The Primate of the Episcopal Anglican Church of Brazil gave a warm welcome to Olympic athletes and visitors in Rio, at the same time criticizing the games’ administrators for what he called “serious mismanagement.”

Archbishop Francisco de Assis da Silva said that the Olympic games “bring together the peoples of the world through healthy competition in several individual and team sports” and provide the opportunity to “encounter, learn, and share the world’s diversity.”

However, da Silva also said that the “serious mismanagement” of the construction of the Olympic Village and the very tight security surrounding the games had caused “additional social concerns” arising from popular discontent and demonstrations on top of the pre-existing political tensions in the country.