With a nod to comedian John Oliver, Presbyterian churches are wiping the slate clean statewide 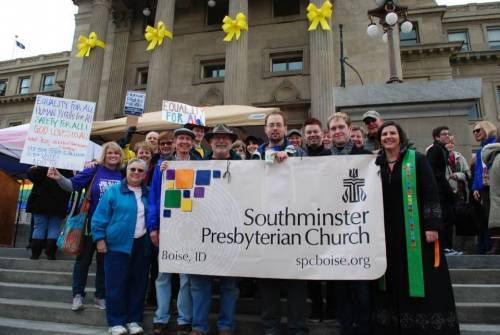 Some of the members of Southminster Presbyterian Church are pictured in front of  the Capitol building in Boise, Idaho. The Rev. Marci Glass is at right. (Contributed photo)

LOUISVILLE — Taking a cue from comedian John Oliver, Southminster Presbyterian Church and the Presbytery of Boise have raised enough money —  about $15,000 as of Saturday’s presbytery meeting —  to remove the possibility that $1.5 million in additional uncollected medical debt will be sold in Idaho.

That’s about $600,000 over the medical debt amount that’s currently available for sale in all of Idaho. The remainder of the debt forgiveness that’s been raised in Idaho will benefit Arizona residents.

“It doesn’t fix the system,” said Southminster’s pastor, the Rev. Marci Glass, who’s also a member of the Presbyterian Mission Agency Board. “But it can give relief to people.” Glass said 549 Idahoans will see their medical debt forgiven as a result of the recent effort. 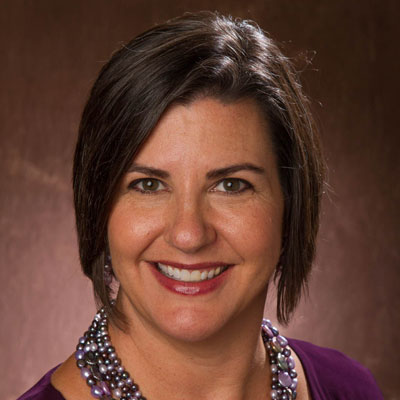 A few months ago, Glass saw an episode of Oliver’s “Last Week Tonight.” Oliver has partnered with RIP Medical Debt to purchase medical debt that’s gone to the collection stage — debt that can be purchased for a penny on the dollar and then, if the purchaser decides to, forgiven.

Southminister congregants contributed nearly $10,000, while the presbytery voted Saturday to contribute $5,500 in mission funds. The $15,000 allows RIP Medical Debt to research and target medical debt that can be sold all across Idaho, a state of nearly 1.8 million people.

It took Southminster members several months to raise their share of the contribution. One woman used the Southminster coffee hour to sell greeting cards she made, then matched the amount she sold — about $300 total. Five presbytery commissioners handed Glass $100 each during Saturday’s meeting.

“I had taken the idea to the session,” Glass said Monday. After accepting the Matthew 25 invitation, “we decided this was a good way to put the rubber to the road.”

“I’m not sure,” she added with a laugh, “that many session members even realized who John Oliver is.”

As it turned out, a commissioner at Saturday’s presbytery meeting is the ethics official at a Boise hospital. He told Glass hospital officials there are now looking at they way they’re handling patient debt. “He appreciated the process,” she said, “because it’s something he can take back to his hospital.”

“What isn’t possible is for a person to purchase their own debt from the hospital. That’s what I wish would have happened,” Glass said. “RIP Medical Debt functions as a debt collector. But instead of harassing and haranguing people, they forgive the debt.”

Glass said commissioners at Saturday’s presbytery meeting “were very enthusiastic in supporting us. I was thrilled. They were engaged. They asked really good questions and they wanted to know more” about the debt forgiveness program.

Glass said she got a firsthand look at how Presbyterians can make a difference when commissioners to the 223rd General Assembly marched in St. Louis last June to end cash bail. 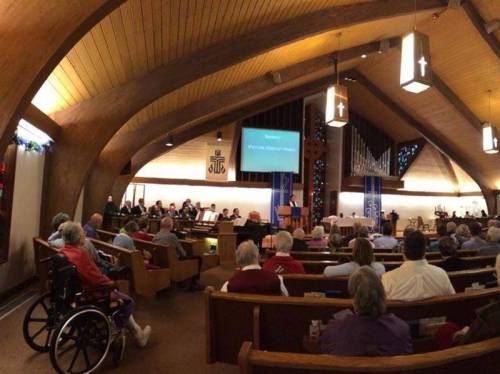 Boise’s Southminster Presbyterian Church has accepted the Matthew 25 invitation. Pastor Marci Glass said the church is “uniformly progressive” in terms of who is welcome. (Contributed photo)

“My congregation wasn’t there. They didn’t get to march like I did,” she said. “But just seeing the denomination at General Assembly make that kind of difference for people we will never have a relationship with — I think that’s what made us see this opportunity.”

“I appreciate the session’s willingness to really engage with our unknown future’s models of ministry,” Glass said. “Knowing things are changing but not knowing what they are changing to can be paralyzing and anxiety-producing.”

“I don’t think there’s anything we can do to return to the past,” she added. “We’ve got to figure out what’s ahead.”