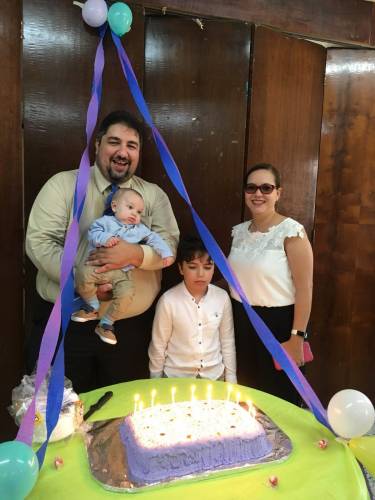 After Hurricane Maria, Christmas Joy gifts helped the Rev. Manuel D. Silva take care of both his church family and his own family. (Contributed photo)

Nobody in his family or congregation was among the thousands who perished, but the September hurricane caused tremendous destruction in Aguadilla, where the Silva family lives, and across the island.  The property damage wrought by the storm was in the billions, and many Puerto Ricans were without electricity for months.

When the storm hit, Silva’s wife, Sylvette, was pregnant with their second child, and like thousands of others in Puerto Rico, the Silva family’s home was unsafe for habitation.  The couple and their firstborn son, Caleb, moved into a tiny apartment Silva’s father owns in a neighboring town.

The Assistance Program of the Board of Pensions, which receives significant funding from the Christmas Joy Offering, helped Silva’s family recover and enabled him to serve his congregation and its surrounding community.  Across Puerto Rico, pastors and church workers received grants from the Assistance Program to help them get back on their feet.

For the Silva family, their grant restocked the refrigerator, replaced household supplies, and bought gasoline that helped Manuel travel to and from Aguadilla to provide pastoral care and tend to other needs. “A company was giving away sandwiches to distribute,” Silva said. “We received 700 sandwiches and drove 40 minutes to Aguadilla to give them out to people of the church.”

“We told them that they were not by themselves, that we are going to be there for them, and that we are going to help them as much as we can,” said Jose Irizarry, the Board of Pensions’ vice president for education. “They were rushing out caring for people, but they also needed to be cared for and that wasn’t being done.”

Since the median salary for Presbyterian pastors in Puerto Rico is significantly below the churchwide median, the assistance that the Christmas Joy Offering helped provide was even more crucial, Irizarry explained. Little money is available for them to save for emergencies, he noted. To provide further help, the board suspended dues payments for Puerto Rican members for four months.

Members at Iglesia Presbiteriana Aguadilla and other congregations rallied around each other and their communities to help people recover from the hurricane.

Nine months after the storm, three families in the Aguadilla congregation were still waiting for materials to fix the roofs of their houses. The congregation has aided these and other families in various ways. “The church has helped them with stoves, microwaves and mattresses, whatever is needed,” Silva said.

The Aguadilla church’s building sustained only minor damage, but it was without electricity for two months. Nevertheless, the congregation continued to gather in the building each Sunday to worship, pray, and encourage one another.  In February, the Silva family welcomed a healthy baby boy, Yanluis.  Several weeks after his birth, the family was able to move back into their home.

While initial reports placed the hurricane death toll at 64, a Harvard University study released in May estimated that 4,645 people lost their lives. Researchers concluded that many of the additional deaths resulted from lack of access or delayed access to health care, most likely due to infrastructure damage. Four months after the hurricane, 450,000 of Puerto Rico’s 1.5 million electric customers were still without power.

Silva is grateful for the assistance he and other church workers received thanks in part to the Christmas Joy Offering and for the aid PDA provided to Puerto Rico from One Great Hour of Sharing and other gifts.  Special Offerings have taken on new significance among his congregation’s members, Silva said. “They give from experience and from love. It’s part of who we are. We take care of people who really need it.”

Most Presbyterian congregations receive the Christmas Joy Offering during the Advent and Christmas seasons. Half of the offering goes to the Assistance Program of the Board of Pensions to help current and retired church leaders in financial need, and half aids future church and society leaders who study in Presbyterian-related schools and colleges equipping communities of color.