The Rev. Talitha Amadea Aho is the guest on ‘A Matter of Faith: A Presby Podcast’ 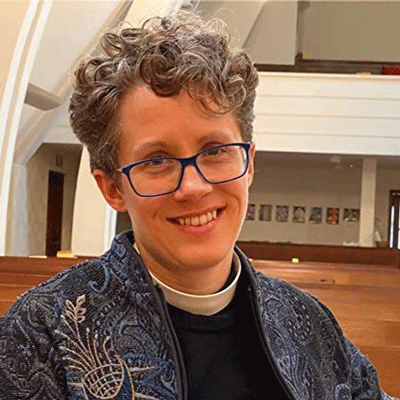 LOUISVILLE — For last week’s installment of “A Matter of Faith: A Presby Podcast” (available here, beginning at 29:45), the question for the guest, the Rev. Talitha Amadea Aho, was straightforward: How should we try to offer spiritual care for young people around issues of climate change?

Fortunately for listeners and for the hosts, the Rev. Lee Catoe and Simon Doong, Aho, a chaplain at a Bay Area children’s hospital, had just published a book on that very topic, “In Deep Waters: Spiritual Care of Young People in a Climate Crisis.”

“We Millennials grew up panicking about recycling and trash. It’s a different thing to grow up thinking about a planet that’s gross and yucky versus a planet on which life is not livable as we know it because the climate has changed so much,” Aho said. Members of Generation Z, who are between the ages of 10 and 25, “are the ones having the deepest existential crisis, and it is a spiritual crisis.” 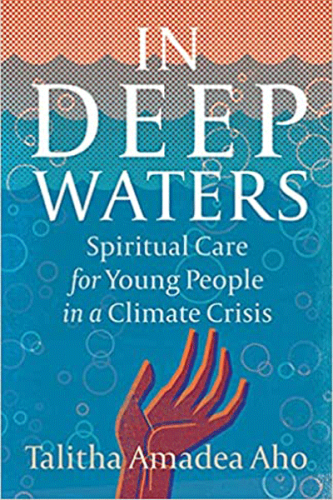 A young woman Aho knows is a conservation biologist. “She narrated to me how she finds God in nature,” Aho told Doong and Catoe. “When she sees the degradation and destruction of ecosystems, she said it felt to her very much like God is dying.”

Presbyterians and other Christians observe the death of God once a year on Good Friday, Aho pointed out. “Imagine that intensity for her. It’s Good Friday every day, to look around and see God dying.”

Caring for the spiritual health of young people is akin to the spiritual care Aho and chaplain colleagues offer to patients and their families and friends every day on the job.

Doong, a mission specialist for the Presbyterian Peacemaking Program who’s done work on gun violence prevention, said pastors have told him that young people “experience gun violence in a different way than previous generations. Their level of awareness and exposure is much higher than [that of] previous generations.” As a result, “they need pastoral care other generations don’t need,” Doong said.

At the developmental stage where many members of Generation Z find themselves, “you’re more deeply traumatized by the trauma around you,” Aho said. “This generation has been defined by the pandemic, by death and loss and also incredible uncertainty and mistrust of the people in charge and the people around them. That’s a foundational experience for Generation Z as they continue growing up.”

“If you’re having difficulty trusting people to keep themselves and yourself healthy at a basic level,” Doong responded, “can you trust society on a much larger scale to prevent or mitigate climate change and the crisis we find ourselves in currently?”

In writing the book, “I was able to articulate that young people do not see the kind of beauty and awe in the world around them I did when I was young,” Aho said. “Growing up in New York City, I was acutely aware that the block you grew up on would affect your sense of the world. Some neighborhoods are more beautiful than others, and it’s easier to feel higher self-esteem and trusting in the beauty of the world and of God if you live in a beautiful place. If you look out over a park or you get to spend summers in the country, it’s really different than if you live on a block with boarded-up windows and absentee landlords.”

Lots of people have a role to play providing spiritual care to young people, Aho said.

“It can be learned and done in our communities by youth group advisors, grandparents and librarians,” Aho said. “The way we meet that need is by affirming people, telling them they are good and interesting, that we like them and we can see why God would be especially fond of them.”

“We can do this ecologically by bringing people to beautiful places,” Aho said. “When you look up at the stars and read some psalms about how humans are part of this gorgeous, amazing Creation God so brilliantly created, you feel you are one small part of something big and wonderful and beautiful.”

Aho gave a copy of the book to a young woman she wrote about. The woman was angry and anxious about the climate crisis. “She said, ‘Thanks. I don’t feel like such a nihilist like I used to,’” Aho reported, adding the woman told her, “It’s good you wrote about me at that stage, but I don’t feel that way anymore.”

“It helps if you can be next to their anger and appropriately respect their anger, but don’t go down that rabbit hole yourself,” Aho advised. “We’re going to get through this. They need to know we can be in the depths with them.”

People who aren’t part of this generation and “aren’t swamped in climate despair need to expand their emotional capacity to be with people in their struggle,” Aho said.

As a 90-year-old woman told Aho a couple of years ago, “there’s never been a good time to bring a child into the world.” Her comment made an impact on Aho. “She showed me she had seen the depths of suffering in every decade she’s lived through, which are many. It was really validating what she said in 2020: ‘I have never seen anything like this. This is really rough in a way we haven’t had rough.’”

New editions of “A Matter of Faith: A Presby Podcast” drop every Thursday. Listen to the podcasts here.