November and December are active months for blazes 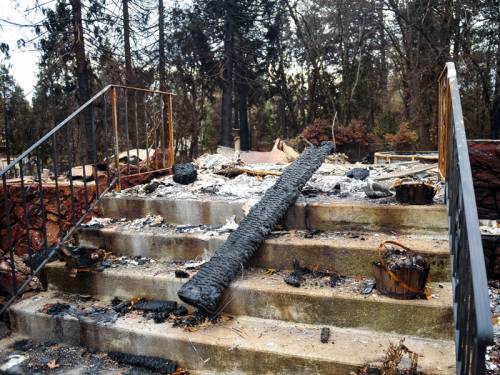 LOUISVILLE — The Rev. David Worth has lived in Southern California for 43 years and can recall wildfires as an occasional, fairly contained occurrence.

“We used to get a spark, and it would go a quarter of a mile,” said Worth, disaster response team chair for Pacific Presbytery in Los Angeles. “Now, it goes a mile or two miles, and the winds are much stronger.”

The term “new reality” is used frequently by Californians talking about wildfires that have become an annual occurrence, particularly in November and December.

“Climate change has created a new reality in the state of California,” Gov. Gavin Newsom said late last month. “It’s not question of ‘if’ wildfire will strike, but ‘when.’”

As Worth alluded to, the new reality is fueled by a combination of dry conditions, extreme — sometimes hurricane-force — winds, and power lines being knocked down by those high winds and sparking fires in dry grass and brush from populated areas such as Los Angeles to rural communities in Northern California.

That has presented presbyteries and churches in the Golden State with the challenge of simultaneously responding to current blazes, working with people impacted by previous fires, and preparing for inevitable new outbreaks.

“I think it’s really hitting the state hard and hitting folks I talk to hard that this is now a really tragic new normal,” says the Rev. Dr. Mary E. Westfall, transitional presbyter of the Presbytery of Sacramento. “I think that we are yet to really even begin to emotionally cope with what it means to be in a place that is not anticipating climate change but is living in it. And I think that that’s a psychological reality that may take a while to sink in.”

One of the unexpected consequences of the wildfires is Pacific Gas & Electric Co. shutting off power to vulnerable areas for days or even more than a week, often on very short notice.

“For some people, if they know power outages are coming, they can hop in the car and go to a cousin in a neighboring town or go find a Holiday Inn somewhere at a distance,” Westfall said. “But for many people, especially the economically vulnerable, or the elderly, they end up having to sort of just stay in place.”

This brings up issues such as people who need medications refrigerated, the loss of refrigerated and frozen food, and people who need electricity to power essential medical devices. Westfall says a man in the bounds of the presbytery she serves died shortly after the power went out and his breathing apparatus stopped.

“We started talking to churches in some of the areas about how we can assist them in some form of emergency backup electrically,” Westfall said. “Recently we were talking about generators. Now we’re looking at solar-powered, high-powered batteries, Tesla batteries, even just for minimal things: someone needs to recharge some kind of medical device or for refrigeration of medication or breast milk or other things that people need to keep refrigerated.”

Worth points out other impacts of power outages such as lost wages for hourly workers who lose working time because their businesses can’t open without electricity.

For some, the losses are much more long term: the destruction of homes or businesses that forces people to consider whether to rebuild or start over somewhere else.

“How do you help people face the reality that you can’t live here anymore?” Worth asks.

The cost of real estate and construction in many parts of California makes rebuilding prohibitively expensive. Westfall, who has been in her post only for a short time, says she has seen people decide to relocate to nearby states such as Idaho, where the cost of living is much lower.

Helping the presbyteries in recovery efforts is Presbyterian Disaster Assistance, which in 2019 has already given $212,500 to wildfire response. Worth says part of the beauty of the funding has been that it is unrestricted.

“That lets us direct the money where it’s needed,” he says, which in Pacific Presbytery’s case has partly been to a director and caseworkers to oversee more than 200 cases the presbytery is dealing with. PDA, he says, has funded 30% of its organization.

“On a national level, people have given, and it has made a tremendous difference,” Worth says.

Worth notes that he got involved in disaster relief, which in his area has included a mass shooting and refugees at the southern border with Mexico, by attending a meeting organized by PDA, which is also helping organize in other ways, including resiliency training for people responding to the crises.

“I am grateful for the national support that touches people locally,” Worth says. “I’m glad they have gotten us involved. National support is something a lot of organizations here don’t have.”

“All disasters begin and end locally,” said the Rev. Jim Kirk, PDA’s associate for Disaster Response in the U.S. “I am grateful that the leadership of Pacific Presbytery is willing to get engaged. Presbyterians are good at organizing and building consensus — both of which are very important for disaster recovery.”

Westfall says presbyteries and churches across the country might also consider looking at how California is responding to wildfires to plan how they will respond when the impacts of climate change reach their communities.

Give to One Great Hour of Sharing to enable Presbyterian Disaster Assistance respond quickly to catastrophic events.