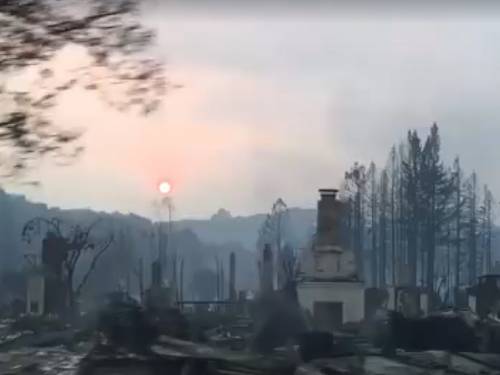 A neighborhood in Santa Rosa, California destroyed by the wildfires. (Still image capture from video by Luke McGarva)

LOUISVILLE — Northern California’s wine country has received the brunt of the massive wildfires that continue to burn out of control. More than 20 people are known to have died in the fires, while at least 285 remain missing. Authorities report 3,500 structures have been destroyed and over 170,000 acres burned.

“We have approximately seven congregations that are directly impacted by the fires. Of that number, we are aware of at least 50 homes that have been lost,” said the Rev. Dr. Robert Conover, stated clerk/executive presbyter of the Presbytery of the Redwoods in Napa. “In some cases, there are people who don’t know if their homes have been destroyed. They can’t get in to find out.”

“The smoke in the air creates a very eerie feeling as the sun tries to shine through,” said Conover. “The color of the sky has this reddish-yellow hue to it. In general, the traffic is lighter except in areas where the freeway is bumper-to-bumper as people try to get around. There’s an emotional shift in the community collectively and you can feel that.”

Despite the continuing fires, Conover says residents are doing the best they can.

“The reports I hear from local pastors are the number of people needing shelters has really diminished in the last 24 to 36 hours as people have found places to stay with family and friends,” said Conover. “There is no need for additional donations. People have been very generous and we have more donations and volunteers than we can manage.”

Conover says Presbyterian Disaster Assistance has been good at reaching out and he and other local church leaders are trying to determine the best way to utilize PDA services. “Our need right now is for people to stay out of the way and let first responders do their work.”

Once the fires are out, Conover says the big task will be finding long-term temporary housing for residents.

“Our council is going to meet in a few days and we will plan initial response and let folks throughout the denomination know,” said Conover. “Right now, the primary concern is simply the well-being of all impacted.”

The losses not only impacted homes, but businesses as well.

“The wine industry has been so impacted by these fires,” said Conover. “It employs over 100,000 people so we have a lot of individuals who not only lost their homes and businesses, but will be out of work.”

Most of the affected areas are in Napa and Sonoma Counties and authorities say more than 8,000 firefighters are working to contain the blazes.

Hundreds of miles south, residents near Los Angeles have had to battle smaller fires.

“We had a very swift moving fire that started mid-Monday morning and because of the Santa Ana winds, the fire moved quickly,” said the Rev. Lissa Smith, pastor of Canyon Hills Presbyterian Church. “We ended up losing 14 homes and other structures were damaged. We had dozens of families that were evacuated and out of their homes for up to 48 hours.”

Lynn Stone, pastor of the nearby Yorba Linda Presbyterian Church says they were lucky.

“We really haven’t been impacted like northern California at all,” she said. “Our eyes are a little scratchy and we’re coughing, but we are grateful. It was really frightening for a while because the fires came close, but we feel like we’ve really been spared.”

Stone says a few members of her congregation were evacuated, but none lost their homes and the fires have been contained.

“I was talking with a neighboring church and so far as we know, people who are affected here are covered by insurance or are back in their homes,” she said. “Most people that we have talked with in the evacuation zone were able to stay with friends or family and were only out of their homes one night.”

Smith says the support from other churches and communities has been heartening and shows the connectional nature of the Presbyterian church.

“PDA has reached out to see if our congregations need anything. They were ready and prepared and that was remarkable. It never occurred to me that we would be in a position of needing PDA,” she said. “Our congregation tries to support PDA work as it relates to hurricanes and other disasters. All of a sudden we were in the position of potentially needing those services ourselves. They were right there for us and that was tremendous.”

PDA has reached out to all of the California presbyteries impacted by the recent series of wildfires. State officials say there are approximately 22 fires currently burning in the state.

“What is most tragic is the loss of lives from the fires. PDA stands ready to help the presbyteries and congregations of California respond and recover once the first responders have completed their work,” said Jim Kirk, PDA’s associate for national disaster response. “Please join us in prayer for those impacted, threatened and those working tirelessly to preserve life.”

To support recovery efforts in the wake of the wildfires, click here. You’ll be taken to the PC(USA) website to donate securely and quickly.