Growing membership reaches across the world to help people in need

A year and a half ago, ten people gathered in Jeanie Shaw’s living room in Sacramento, California to worship. Before long, they moved to her backyard. This past Easter, more than 100 people gathered at Eventide Community to celebrate the resurrection of Christ and three adult baptisms.

Shaw is one of the church’s 1001 New Worshiping Community pastors as well as an active member of the Presbyterian Disaster Assistance National Response Team and is often called upon to travel to parts of the country recovering from disaster. It is that passion for disaster assistance that has driven members of her congregation to roll up their sleeves and immediately go to work helping people in times of trouble. 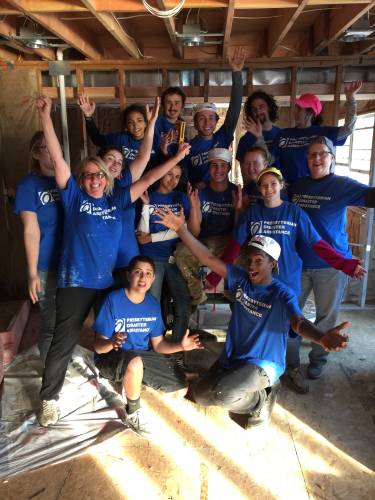 “I know that young people in our world today have a spirit of generosity that is unmeasurable. They don’t want to just give to a mission, they want to participate in that mission,” she said. “They want to swing a hammer and be there to see people face to face. When they have that kind of opportunity to serve, they want to be a part of that community.”

The recent recipient of an Investment Grant, Eventide members gather at round tables on Sunday night in a fellowship hall and share a community meal following worship. “Our worship is very invitational, children and parents read a psalm together. Scripture and prayers are all done by members of the community. We are all a part of the worship experience,” said Shaw.

Shaw says Eventide Community has a one-word mission statement, “mission” and they are committed to sending people out into the neighborhoods, the nation and world to work in Presbyterian-connected mission projects.

“We made five mission trips in 2015 and have seven planned for this year including the four we have already completed,” said Shaw. “We are renovating a multi-cultural house in downtown Sacramento and partnering with a Presbyterian church in Alaska as well as a school and village in Nicaragua.”

Shaw says her congregation continues to draw young people looking for a place to serve.

“Most are young adults who have grown up in homes with no religious affiliation and no Bibles,” she said. “They were invited by their friends who were invited by friends who had been invited to go on one of our mission trips. And it just keeps growing.”

All mission trips are connected with the Mission of the Presbyterian Church. Shaw says the relationships the members develop are shared when they return home.

“One of the most powerful testimonies we encountered was during Sandy relief efforts. A woman who had been out of her home for four years said her 12-year-old daughter didn’t believe in God anymore because God wouldn’t do this to every person they know,” Shaw said. “The next day the woman came to our workers and said her daughter is a believer again because people would not come all the way from California if they didn’t believe. These are the kind of stories that make faith real.”

Growing churches can be simple adds Shaw if people do what Jesus did – be in God’s word and do mission. “We don’t need a fancy consultant or program, we just need to do Bible study and God’s work.”