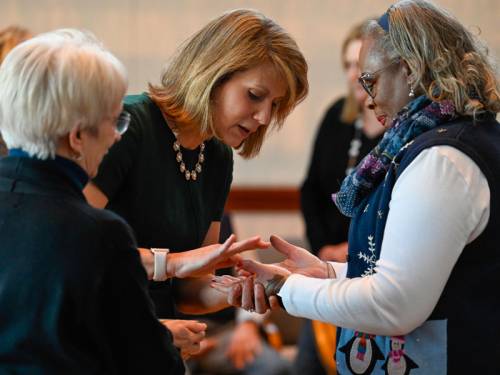 The Rev. Donna Frischknecht Jackson led worship at the Presbyterian Center Wednesday. Here she pronounces her “beautiful you” blessing while making the sign of the cross on the hand of a fellow worshiper. Jackson used frankincense and myrrh oils while applying each cross. (Photo by Rich Copley)

LOUISVILLE — Visitors and staff at the Presbyterian Center have the Rev. Donna Frischknecht Jackson to thank for the velvet ropes surrounding the Nativity scene in the lobby of denominational headquarters.

Jackson, a parish pastor and editor of Presbyterians Today magazine, said during Chapel worship Wednesday that during Advent season last year she found herself waiting in the lobby with a copy of the magazine in her hand. Take my picture, she asked a friend. Jackson knelt before the baby in the manger and offered him the copy of the magazine.

“I decided the Wise Men wouldn’t outdo me with their gifts,” she said. “I told her, ‘Quick! Take my picture before I’m arrested.’”

Headed home via airplane the next day, Jackson looked down at the magazine cover in her lap. Tears rolled down her face.

“I thought that the moment I entered into the Nativity, when I knelt down and presented the magazine, I remember looking at Jesus and at the magazine and realizing that God was using my gifts to tell the stories of all those Presbyterians whose voices are not being heard,” she said, inviting worshipers to “stop for a holy second at the Nativity, sneak in and say to God, ‘Work through me. Take my gift and use it. May my gift truly glorify your name so that the world can truly see that love rules.’” 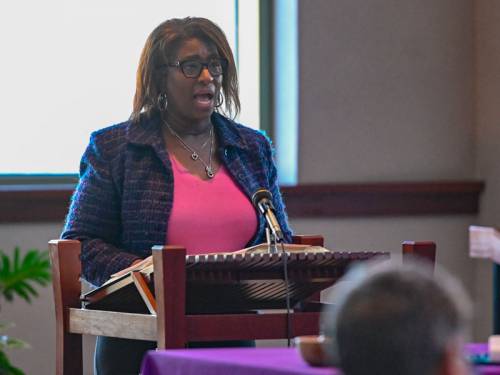 During a sermon she called “Your Place in the Story,” Jackson said she delights when children in her congregation discover their own place in the church’s story. One day while telling the children about how David prevailed over Goliath, she asked the youth to find the five smooth stones she’d hidden in the church lawn. On each stone was painted a word important to people of faith, including “hope,” “love” and “faith.”

The children quickly found four of the stones, but one evaded detection. “Hey Pastor Donna!” one boy cried. “I hate to tell you, but we’ve lost ‘Faith!’” The pastor of a neighboring church was nearby and heard the remark. She and Jackson exchanged grins.

“I could just see their church sign next week,” Jackson said. “’Presbyterians have lost faith. Come worship with us.’”

Digging a little deeper into the lives of the church youth, Jackson determined they were being bullied by children attending schools in nearby communities because of the school’s losing season on the football field. “Wait a minute!” she told the youth. “There’s a Bible story about that,” where Nathanael asks Phillip, “Can anything good come out of Nazareth?” Youth were surprised to hear a story about taunting — even bullying — in the Bible.

Jackson and the youth worked for weeks to help members of the group discover their gifts. One developed the gift to pray in public. Another fell into baking cookies for the church’s older members — “all six of them,” Jackson said of the tiny church.

Jackson left that congregation to lead a larger one, but found she preferred serving smaller congregations. At a writer’s conference she told a stranger she believed God was calling her back to a smaller congregation in Vermont or upstate New York, where Jackson could write more and “tell the stories of little rural churches that have been forgotten.” The woman told Jackson to “go, and don’t be afraid. These churches need your voice.”

Unbeknownst to Jackson, the woman turned out to be the acclaimed author Kathleen Norris, who’s written “The Cloister Walk,” “Dakota: A Spiritual Geography” and other best-sellers.

Even without a new calling, Jackson moved like Norris told her to. She soon found another church to serve and was named editor of Presbyterians Today.

“Everyone in this room has a gift they aren’t sharing,” she said. “The world gives us a message that ‘That’s kind of a stupid idea you have. You should be more practical.’ … Together our gifts build God’s kindom, but you have to be bold and let your gift shine so it doesn’t go to waste.” 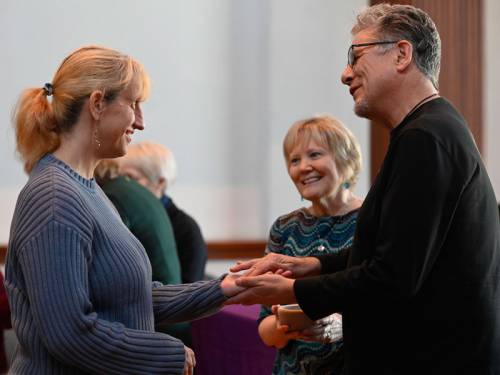 Worshipers who came forward received a cross drawn on their palm using frankincense and myrrh oils. (Photo by Rich Copley)

After her sermon, Jackson and other communicators in the Presbyterian Mission Agency shared a blessing Jackson wrote for the congregation she serves: “Be the beautiful you God created you to be, and let your gifts shine brightly in this world.” Worshipers came forward to receive the blessing, cupping their hands so that a mixture of frankincense and myrrh oils could be drawn on their palms in the shape of the cross as they received the blessing.

“By golly, let your gifts shine,” Jackson said during her benediction, “because the world needs you.”