PORTLAND – For anyone who hasn’t yet heard of the University of Pikeville, it simply means that the school’s new president, Burton J. Webb, Ph.D., is doing exactly what he was called to do.

“In some ways, we should be more present than we are, but in other ways if you live in New York City and haven’t heard of us, I think that’s really my folks doing their job,” says Webb, who in January became Pikeville’s 21st president. 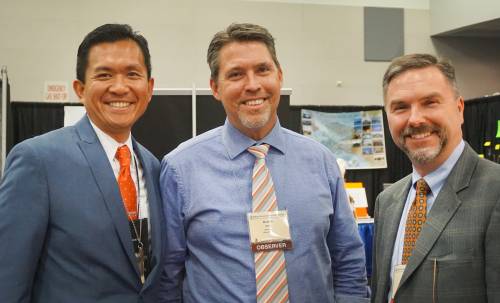 Founded in 1889 by Presbyterian ministers in northern Ohio and Kentucky—whose purpose was to establish a school for the children of the hills of Appalachia—the Presbyterian-related school known as UPIKE remains firmly committed to that mission some 125 years later.

“If our mission is to be the educational institution of Central Appalachia and we’re wasting money marketing outside Central Appalachia, then perhaps we’re not using our resources well,” Webb says. “I think that making sure that the folks who live in eastern Kentucky, Virginia, West Virginia, Tennessee, and southern Ohio know about the college is a very important thing.”

Webb says that he and his wife Kay, who holds a Ph.D. in counseling psychology, have been called for many years to colleges in rural settings that serve students who are generally or primarily underserved.

“Certainly the kids of the miners and the coal workers in central Appalachia would fit that bill,” he says. “Of course the college is bigger and more expansive than that now, but we certainly feel that this community is a place that we’re called to. As every day goes by, we’re falling ever more in love with the people of Pikeville. They are the most warm and kind people that we have had the good grace to meet.”

“We’re doing all of the things you do to get an optometrist licensed,” says Webb of the latter initiative, “but we’re adding an aspect of spiritual care and spiritual formation inside the optometry program that is somewhat unique. We’re excited about that.”

Webb is quick to add that for a liberal arts college, which has a total enrollment of around 2,000 students across all of its programs, UPIKE is “an incredibly good value.” Tuition is under $20,000, a cost that is further discounted on average by nearly 50%.

Additionally, since the majority of UPIKE’s students—over 60%—qualify for full Federal Pell Grants as well as programs administered by the Kentucky Higher Education Assistance Authority (KHEAA) such as the Kentucky Educational Excellence Scholarship (KEES), most students are eligible, in total, to receive almost $10,000 in state and federal aid.

“In fact for students who are from Pike County, which is one of the most economically depressed counties in eastern Kentucky, we guarantee something called the Pikeville Promise,” says Webb. “If they’re academically strong, full Pell eligible, and they get their aid, we waive the rest of the tuition.”

Webb’s presence at the 222nd General Assembly (2016) in Portland—his first assembly—signals his larger agenda “to reignite the connection between the college and the church.” He is proud to be one of the 56 member institutions represented by the Association of Presbyterian Colleges and Universities (APCU), and to tell Pikeville’s story to the thousands of Presbyterians visiting the Assembly’s Exhibit Hall.

“We are still faithful to the school’s faith tradition to serve the students of Appalachia,” he says. “Presbyterians should be proud of that.”