by Lea Sitton Stanley, Board of Pensions | Special to Presbyterian News Service 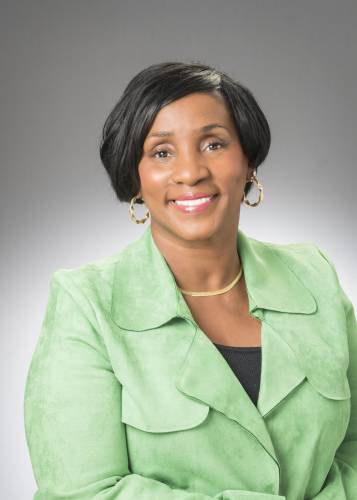 Kelly Riley is the Board of Pensions’ Senior Vice President for Plan Operations. (Contributed photo)

PHILADELPHIA — Kelly Riley wasn’t looking to change jobs two decades ago when she accepted a position as the Director of Member Services with the Board of Pensions. “I always tell people I truly believe I was led to the Board by God,” said Ms. Riley, now the agency’s Senior Vice President, Plan Operations.

Happy where she was, overseeing claims processing and customer service at Anthem Health & Life Insurance Co., Riley said she was persuaded by an employment recruiter to interview at the Board of Pensions. “These are nice people,” Riley thought after meeting the folks at the Board. “These are people I could work for.”

Being strong willed and having built her management muscle in a corporate environment supervising a staff of more than 200, Riley found working at the Board to be an adjustment in the beginning. At the Board, “so many people had a say in the work that you did,” she said. “I just wasn’t used to the culture.”

Now she believes “it’s good that everyone has a voice. We all, each and every one of us, has a say when it comes to service, and, in many ways, the Plan Operations team is the face of the Board.”

Plan Operations is the support system for employers and Benefits Plan members. Riley’s team answers questions about coverage and assists with benefits matters. When callers hear a friendly voice on the other end of 800-PRESPLAN asking, “How may we serve you?” they’ve reached a member of Riley’s team. When new initiatives are approved, such as the Board’s most recent financing of Pastors’ Participation dues for organizing pastors and evangelists, her team implements them.

“We do our work in a different way because God calls us,” Riley said. “We don’t really do our work the same way they do in corporate work environments. We have to do it differently because we’re the Church.” To work in Plan Operations, “you have to be willing to put yourself in someone else’s position. They’re calling us because of a death. They’re dealing with a sick child. They’re calling us because they need assistance.”

Riley deeply understands need. During the 1960s she was a young child in Newark, N.J. Poverty was entrenched. The majority of city residents were African American. Frustration mounted over the failure of city government to respond to its citizens’ needs, and, in 1967, riots erupted. Riley’s grandmother was babysitting for her and her two brothers when they heard gunfire. “She had us get down on the floor and then covered us with her body,” she said.

Now a grandmother herself, to a baby girl, and married with two adult daughters and a 17-year-old son, Riley remembers a childhood with young parents “who were very much in love and focused on their children. They instilled in us the importance of hard work, honesty and doing well in school.”

At age 4, her parents sent her to Head Start, the federal pre-K program for children from low-income homes. Head Start was new at the time, and, in the years since, researchers have checked in with. Riley to see how she fared. Clearly, she is a Head Start success.

After graduating from Rutgers, The State University of New Jersey, Riley spent 15 years in the health insurance industry before joining the Board of Pensions. Her responsibilities have grown steadily, especially in recent years, with the introduction of new service delivery models, including expanded online capabilities as well as initiatives to help support ministry in different contexts.

Today, Riley sits on the Board’s executive team and is one of its two representatives on the Diverse Voices Table, convened this year to foster greater denominational equity and inclusion throughout the Presbyterian Church (U.S.A.), including the agencies.

While Riley worships in the African Methodist Episcopal Church, she moves easily through the PC(USA), where she serves members and employers every day. She said the best part of working at the Board is being in a position to make a difference: “When you place God in the center of it, we are all called to be better.”

Lea Sitton Stanley is agency writer at the Board of Pensions, which supports wholeness in the Presbyterian Church (U.S.A.) community and care for Benefits Plan members. For information, contact info@pensions.org.