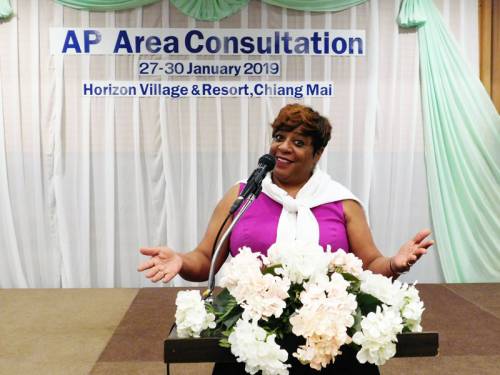 The Rev. Dr. Diane Moffett, president and executive director of the Presbyterian Mission Agency, leads a Bible study at the Asia and the Pacific global partner consultation. Kathy Melvin

LOUISVILLE — During Presbyterian World Mission’s recent global partner consultation for Asia and the Pacific in Thailand, more than 50 representatives came together for two days to discuss the effectiveness of current partner relationships, what it means to be partners in God’s mission today, where God is calling us to put our energy and what resources are needed to move forward.

The meeting in Chiang Mai was the third of four international global partner consultations, followed in the spring and summer with three domestic meetings with U.S. partners. The information gathering process is in preparation for World Mission’s strategic planning process.

After opening prayer and a Matthew 25 Bible study by Dr. Havilah Dharamraj, academic dean of the South Asia Institute of Advanced Christian Studies, the group heard two very different presentations about reading the signs of the times in Asia and the Pacific. Both presentations addressed the impact of empires on the church and on God’s creation, whether focusing on humanity or the physical earth.

The Rev. James Bhagwan, general secretary of the Pacific Conference of Churches, said the Pacific region prefers to look at itself as the oceanic continent. “The ocean does not separate us, but brings us together,” he said. “We work together to discern the common issues. We are stronger when we speak together with one voice.” Those ongoing issues include nuclear testing, modern-day slavery, economic globalization, trade, HIV/AIDS and sexual and reproductive health. The organization has the added challenge of communication. More than 2,000 languages are spoken in the Pacific. 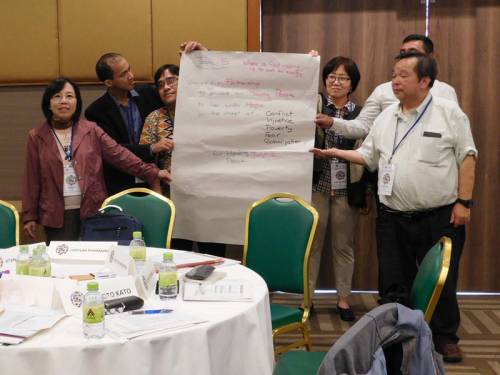 During the global partner consultation, representatives broke into small group discussions and reported to the entire group. Kathy Melvin

Bhagwan said that an area of great concern for the entire region is environmental stewardship, which includes ocean pollution, plastics, overfishing, and unsustainable development practices and extractive industries. “We don’t talk about science or politics, rather the impact on lives,” he said. Another critical concern is the impact of climate change, including rising sea levels and rising temperatures, which could lead to the extinction of living cultures. The region faces the creation of climate change refugees — people who have no land to return to because their land is under water.

Although the crisis is escalating, the group hopes they can have a realistic impact. “If we cannot be brothers and sisters to the fish, the land and the air, at least let’s be good neighbors,” Bhagwan said.

Dr. Jooseop Keum, distinguished professor of World Christianity at the Presbyterian University and Theological Seminary in Seoul, looked at the signs of the times through a theological lens. This, too, is in crisis, he said.

“The top leadership of the global empires and little empires are openly creating the politics of fear based on discriminating and bullying the other, particularly the weak, the minorities, the stranger and the poor,” he said. But, he added, it is not only the politicians who can be blamed. He quoted from a recent gathering of younger theologians who gathered at an International Theological Colloquium for Transformative Ecumenism.

“The ecumenical movement is in crisis,” he said. “It is no longer strongly rooted in the people and it does not speak a prophetic voice which echoes in the realities of people’s struggles for life. … The ecumenical leadership has suffered from bureaucratic and business-oriented mindedness that lacks the sense of calling and devotion.”

Dr. Keum said it is difficult to listen to the criticisms of younger theologians, but reflecting on a Korean proverb, he said, “A good medicine is bitter.” He believes that Christian leadership needs to engage more around the utopia of God’s Kingdom and rediscovering faith at the margins. “God’s love,” he said, “defeats the politics of fear.”

During a Bible study on the second day of meetings, the Rev. Dr. Diane Moffett, president and executive director of the Presbyterian Mission Agency, shared with the group the concept of what it means to be a Matthew 25 Church. “As with many of our congregations, mid councils and other groups, Matthew 25 is a natural fit for our partners in the Asia Pacific as they labor to eradicate systemic poverty, dismantle structural racism and create vitality within the congregations and communities they serve,” she said.

“The World Mission Asia Pacific consultation was a great time for me to listen, learn and lead our partners in the understanding of what the PMA’s direction is with regards to being a Matthew 25 Church,” she said. “It was also a time to encourage and celebrate the various ministries where the Matthew 25 Church is already being embodied. I came away full and blessed by hearing how God is operating through the ministries of our partners.”

The final of the four global partner consultations is scheduled for late February in Cartagena, Colombia, for the Latin American and Caribbean regions.