Make A Donation Click Here >
Home › Around the table, a variety of hearts and skill sets 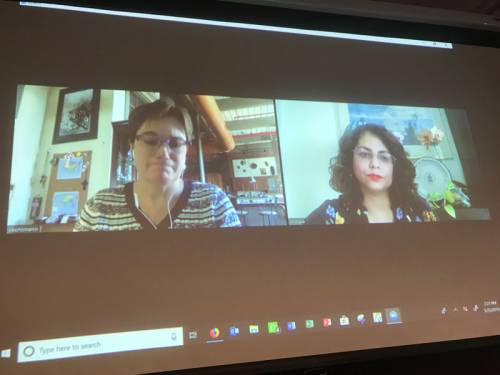 LOUISVILLE — Members of the Moving Forward Implementation Commission learned Monday why they’d been selected by the women who picked them for service — the co-moderators of the 223rd General Assembly, Ruling Elder Vilmarie Cintrón-Olivieri and the Rev. Cindy Kohlmann.

“We wanted to bring people together from the spectrum of the church,” Kohlmann told the commission, meeting Monday at the Presbyterian Center during the first day of a two-day session. She said the co-moderators were looking for people with pastoral hearts, vision, strategic skills — “and we also wanted some detail people around the table,” she said.

“Your task is daunting, to say the least,” Cintrón-Olivieri said. “Implementing a General Assembly mandate is not an easy task, and ensuring diversity is complex. We are confident in your skills and gifts and what the Lord has put in your heart.” She advised commission members — tasked with leading on matters of inclusion, equity and translation services, among others — to “rely on your instincts.”

Kohlmann told commissioners the vision the co-moderators have for the commission’s work “is in line with the vision of becoming a Matthew 25 church,” with its three emphases: dismantling poverty and structural racism and building congregational vitality. As she looked over the commission’s mandate, “I feel like the most important thing you can accomplish as a commission would be around the trust and transparency piece. How do we move from what happened in the past to a place of trust and transparency?”

“Yes, there is implementation and oversight — but there is also a pastor’s heart,” Cintrón-Olivieri said. “We have gone through the waters and we are now on the other side. Our church looks different than it did 10 years ago.”

When commission co-chair Marco Grimaldo said that commissioners are considering issuing a progress report — perhaps as part of Big Tent Aug. 1-3 — Cintrón-Olivieri and others praised the idea.

“As we travel, we find that people are happy with what’s being done, but they always want more,” she said. “Questions of inclusion have a lot to do with the work you’re doing.”

“No great expectations come without challenges,” he told them. “We have to remember this is a journey, not necessarily a destination.”

Nelson said a commission progress report  “would be very helpful.”

“I think there is good news to report,” Nelson said, “and I think it’s vitally important to have a consistent pattern of reporting leading up to General Assembly (June 20-27, 2020, in Baltimore).”

Nelson told commissioners he believes membership in the PC(USA) would be showing growth if people participating in, for example, new worshiping communities were counted as members. “If you don’t pay per capita, we don’t count you,” he said. “There are issues that make some people second-class citizens in our denomination.”

As he travels the country, Nelson said he’s learned “there is hope in this denomination, that we are really becoming the church of the 21st century. To do that, we’ve got to relieve ourselves of some 20th century ideas.” He gave commissioners these words of advice: “Don’t just be a group of people trying to fix a problem.”

Commissioners also met Monday with two members of the Committee on the Office of the General Assembly: The Rev. Dr. Barbara Gaddis, COGA moderator, and the Rev. Andy James.

“Much of your work has already started,” Gaddis told the commission, including the formation of a Diverse Voices Table and a discussion on the possible expansion of translation services. “Your job is to monitor that and make sure it happens appropriately.”

“I think you are empowering some of the existing structures,” she said, “so that when you are no longer around, they will find it easier to keep going.”