DECATUR, Georgia — “Jesus came to give us life to the full. Is life to the full having a secure job and taking care of our families well, or could it be life to the full is that I feel true internal freedom?” said Dr. Jessica ChenFeng, quoting John 10:10 in the opening keynote for the “Pursuit of Asian American Happiness” virtual conference hosted by the Center for Asian American Christianity at Princeton Theological Seminary on Thursday.

The ecumenical conference is in its second year and drew over 275 attendees to its two afternoon keynotes by ChenFeng, associate professor of marriage and family therapy at Fuller Theological Seminary, and Jess Cho Kim, a licensed clinical social worker, activist and church elder in New Jersey. The keynote speakers focused on the causes of Asian American mental health challenges as related to histories of migration, racialized trauma and cultural taboos, then spoke to the role that the Asian American church can play in healing.

“I want to validate that for someone who has lost so much in the immigration process, it makes sense that some of the biggest dreams for their family is simply educational and financial stability,” said ChenFeng, who shared statistics about the context of migration and stories from her experience as a second-generation Taiwanese immigrant. ChenFeng said the “multiple losses” of the history of migration that live in Asian American families is rarely spoken about but still very present in their family system. ChenFeng noted that 57% of Asian Americans (71% of Asian American adults) were born in another country, 34% of U.S. Asians speak only English in their homes, while 66% speak another language. More than half of Vietnamese and Filipino Americans send money to family in Vietnam or the Philippines.

In her life and her practice, she has watched these losses manifest themselves in the distance from an original country, culture, language and extended family; in the emotional labor and financial costs of maintaining bonds and supporting family overseas; in the language gap between first, second and third generations; and in the stoicism necessitated by survival, by linguistic dislocation and by the stress of trying not to harmonize while not fully prepared to face the racialized society that is America.

Subsequent generations experience these losses through the silences when they must learn of their cultural migration stories through school rather than in deep discussion with older generations, especially when those stories include escape from war and involve racialized violence. ChenFeng pointed out that while some Asian Americans are fifth- and sixth-generation, recent understandings of the intergenerational impact of trauma suggest that histories of migration and survivalist coping mechanism affect each generation. The impact of racism and the generational shifts in processing it and advocating for oneself and one’s health within American culture is another stress that affects Asian Americans’ claim to individual and communal flourishing. ChenFeng discussed the particular ways that mental health in Asian American communities is not merely a condition of the individual mind but a dynamic within the family and a symptom of cultural forces.

“My dream is that we would hope for healing that goes beyond the tangible and the concrete, that we would have relational connection that is meaningful,” said ChenFeng. “We would be known, be seen and loved by our communities, by other racial groups, that there’s true freedom from generational pain, that we can live with a deeper faith, hope and love, and that there’s a mutual connection with siblings at church and neighbors in the community.”

ChenFeng pointed out that it is often Asian American churches that play a role in defining what is real for families struggling with the psychic costs of immigration and trauma. Pastors who preach about mental health issues and who actively address the legacies of their own family trauma normalize their existence and offer hope for a way through.

In the second keynote, Cho Kim also emphasized the role the pastor can play in integrating mental health into the flourishing of individuals and the community. Cho Kim acknowledged that Asian Americans represent 50 different ethnic groups speaking more than 30 languages. “We’re very diverse, but we do know that 42% of Asian Americans identify as Christian … and we know they seek their church leaders before they go to mental health professionals.” She emphasized that it is not only silences around depression and suicide that need to be broken in the pulpit but also the mental and emotional stress experienced from racism and recent surges in AAPI hate in the larger culture.

Cho Kim, who has developed a mental health training program for Korean American church leaders through the Mustard Seed Generation, where she serves on the board, offered a model of how to set up a mental health ministry that involves more than just the preacher. She suggested setting up a mental health team of three members with representation from a licensed professional and people with experience facing their own challenges or giving care to others who have. “Take baby steps the first year, but do this with a team, because you can’t do this alone,” advised Cho Kim, who suggested creating a small budget, an education and training plan that may take the form of a wellness support group or various seminars on topics like trauma, addiction, anxiety and eating disorders, and compiling a resource list of local counselors and maybe even a fund to subsidize a few sessions for members in need. 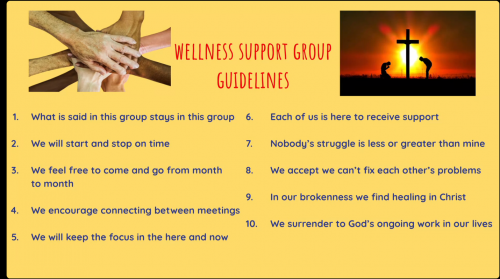 “As Christians, we’re called to bear one another’s burdens,” Cho Kim said, quoting Galatians 6:2. “Jesus cared about our minds, bodies and spirits. … Loving our neighbors means we are to care about the mental health of others.”