Sprunt lecturer reimagines the sad and complicated tale of Hannah, Peninnah and Elkanah 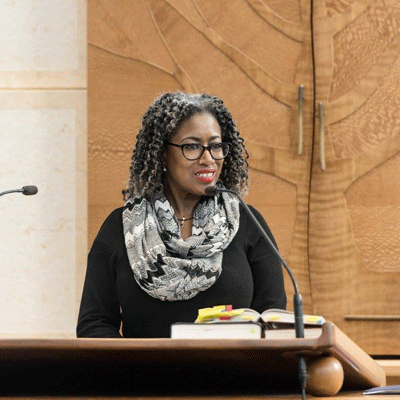 LOUISVILLE — The Rev. Dr. Wil Gafney will soon be publishing the second volume of her landmark book “Womanist Midrash.” On Tuesday as part of the 111th Sprunt Lecture at Union Presbyterian Seminary, Gafney gave a crowd gathered at Watts Chapel a taste of what she has to say about 1 Samuel 1 and 2, the stories of Hannah and Peninnah, their children and their husband, Elkanah.

Gafney, the Right Rev. Sam B. Hulsey Professor of Hebrew Bible at Brite Divinity School in Fort Worth, Texas, spoke on “Translation Matters: Who Translates God Words and How?” View her second talk here.

In this telling, Hannah is more than the woman who gave birth to Samuel, promising God she’ll give her boy up to Eli the priest if only she can conceive. Hannah’s teachings range from how to pray to understanding biology.

“The ancient world did not know of barren men,” Gafney said. “The ancients believed male seed contained future offering stuffed inside each other” — like Russian nesting dolls, she said — “and women were the ground in which they were planted.”

Like others at the time, authors of the Hebrew Bible “were not aware of seed that’s blighted. It’s not a difficult concept, but they didn’t make the stretch,” Gafney said. Instead, in the text, barren women are transformed into fertile women by a miracle of God.

Years of infertility have taken a toll on Hannah. “The onus of infertility is on God,” Gafney said. It’s as if Hannah is telling God: “You have made the multitudes. I just want one!”

She prays privately, believing “God can and will hear her,” Gafney said. Eli the priest is taken aback, calling her a drunken, muttering woman. Hannah “teaches him her prayer Torah, and then Eli blesses her and the Torah,” as well as her prayer request. Still, Hannah “refuses to allow Eli to be her intermediary with God,” Gafney noted.

Hannah has a son, “and there’s a tenderness to Hannah’s raising of young Samuel,” Gafney said, a ready comparison to Moses’ upbringing.

Hannah promises to bring Samuel to Eli after she weans him, a process that she may have stretched into the boy’s third year.

Her famous prayer captured in 1 Samuel 2:1-10 is the basis for the prayers of subsequent women in the Bible, including Mary’s Magnificat. Then Hannah gives Samuel to Eli and sets to work creating fine garments for her boy, delivering them on the annual feast day. “Hannah may have given him to God,” Gafney said, “but Samuel is still her child.”

Hannah later gives birth to two daughters and three sons, who are never again mentioned in Scripture. There’s also no indication of Samuel’s family. “In many ways,” Gafney said, “David and the nation are his sole concern.”

At the beginning of the story, the childless Hannah is despondent “because her body does not function in ways women are told their bodies are supposed to function,” Gafney said. “Because Hannah’s story has a happy ending, unlike many experiencing infertility, I’d like to offer a blessing based on Elkanah’s speech: ‘Our love is worth more than seven sons. The heart of a good man would rather trust in a righteous woman who will not bear children than a bitter and fertile woman.’”

And what of Peninnah, Elkanah’s other wife?

“In all my hearings, Peninnah has always been the villain,” Gafney said. “She and her body are used by a man who uses her sexually and does not love her. He publicly states his love for someone else. Peninnah has produced an heir and a spare. Like Leah of old, she hopes he will one day love her, but he took another woman more to his liking.”

Both Peninnah and Hannah live in a patriarchal society where they’re “assessed on their ability to provide children and, less so, on their appearance,” Gafney said. “They play the game with the hand they have been given.”

What if, Gafney wondered, Hannah and Peninnah found a way to change the game?

“Sometime after giving birth to her second child for Elkanah, Peninnah realizes that he does not love her,” Gafney said. “He loves that other woman, Hannah, who has not done what a woman ought to do. So [Elkanah] keeps coming back to her, to her bed and to her thighs, because she can do what a woman ought to do and she will do it. But not anymore. Peninnah closes her heart and closes her thighs, and she opens her mouth. She tells him she has done her duty. She has provided him the heir and the spare. She will raise them, love them, nurture them, teach them and train them, but she will not add to them.”

“When Elkanah returns to Hannah’s bed frustrated that Peninnah has denied him access, he discovers that Peninnah has been there too,” Gafney said. “It is her voice that he hears in Hannah’s mouth when she asks him, ‘If you love me so much, more than seven sons, why are you still slipping into her bed?’ He withdraws, and for once Hannah and Peninnah sleep in their own beds on their own terms.”

Then Gafney delivered excerpts from an upcoming sermon:

“Elkanah loved Hannah but he seems to have no love for Peninnah. In biblical language, he put Peninnah to shame when she had done nothing wrong and everything right, according to their shared cultural values and the patriarchal system they found themselves trapped in.

“And so [Peninnah] acted out. She acted out against the one who symbolized her hurt, but not against the one whose power had hurt her and kept her in her hurt. That’s how patriarchy and other systems of power work. They keep the people at the bottom fighting each other rather than joining together and tearing down the systems that trap us.

“If you ask Peninnah, she might have told you she was willing to get by on the crumbs of love that fell from the table of Hannah and Elkanah’s love.

“Peninnah’s story is a story of hard truths that looks more like the story we live in today than Hannah’s story does. She teaches us that you can do what’s right so far as you know and still get your heart broken. She teaches that people with power will almost always choose power and use that power to get whatever they want no matter who they hurt.”

Read a Presbyterian News Service report on Gafney’s first Sprunt Lecture here. Look for Gafney’s sermon, which she’s calling “The Other Woman,” next month on the Day 1 website.