The church is responding to the Syria-Turkey earthquake, GIVE NOW!
Make A Donation Click Here >
Home › Amplifying voices we don’t often hear from 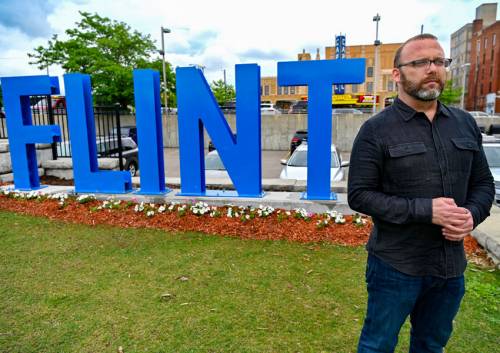 Filmmaker David Barnhart in the heart of Flint, Michigan. The city’s water crisis was the focus of his film, “Flint: The Poisoning of an American City,” which premiered in Flint in September 2019. (Photo by Rich Copley)

LOUISVILLE — Producing a film that makes a difference starts with relationships and gets to the big screen by talking with and listening to people whose voices aren’t often heard.

Acclaimed filmmaker David Barnhart, associate for Story Ministry with Presbyterian Disaster Assistance, was the guest last week on A Matter of Faith: A Presby Podcast, hosted each week by the Rev. Lee Catoe, managing editor of Unbound: An Interactive Journal of Christian Social Justice, and Simon Doong, mission specialist for the Presbyterian Peacemaking Program. Listen to their conversation here.

“Filmmaking is rooted in relationships,” said Barnhart, whose film credits include “Flint: The Poisoning of an American City,” “Trigger: The Ripple Effect of Gun Violence” and “Locked in a Box.” “In the work we do we try to come alongside communities that have been silenced or oppressed by systems or structures. We work to amplify voices that are not being heard and to challenge the dominant narratives that are out there.”

Barnhart told Doong and Catoe he avoids coming into a project with a script or even a framework in mind.

“We try to start every film with an open slate, and to listen and learn from each interview,” he said. “The hope is the voice of the film comes from those communities and those conversations.”

It took five years to complete “Flint,” a project that began with two months of just talking to people and groups and visiting people who had lead poisoning in their homes. “It was really two months of listening and learning,” Barnhart said, “and saying, ‘We are interested in this project. What does it need to look like?’”

In the process of gathering voices to be included in “Flint,” the circle kept growing. “People would say, ‘We’ve got 10 people we’d like you to talk to.’ Just from those initial conversations you’d see this widening community of circles happening around us,” he said. “I feel like my role is to listen and make connections and be committed to the process.”

Once the editing was complete, “the first thing we did was take it back to the community to screen it,” he said. “The premiere was in Flint. The various community leaders who worked with us organized the premiere,” which was attended by more than 600 people. 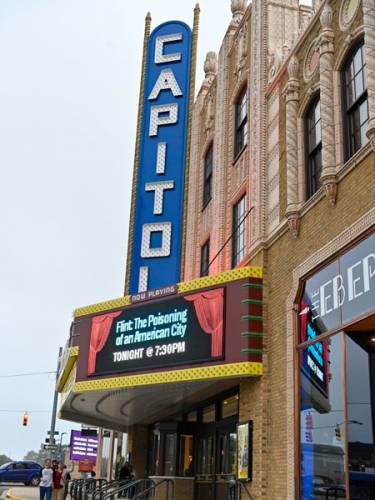 More than 600 people attended the world premiere of “Flint: The Poisoning of an American City” at the Capitol Theatre in Flint, Michigan on Sept. 12, 2019. (Photo by Rich Copley)

“When we gather the people to see it, I always say we could fill an entire theater with everyone who has participated in the film,” he said, especially “Flint” and “Trigger,” which took seven years to complete.

The next step for “Flint” was to screen the film in other cities dealing with dangerous inadequacies in their drinking water systems. “What I love about that is that when people gather for these screenings, they come with intention,” Barnhart said. “It’s not passive. When people see a film at a film festival, they say, ‘Oh man,’ and then they go home. You don’t really see the intention and the gathering [as you do] when a community or a church hosts a screening.”

“I think that gathering with a purpose is really important, especially in terms of how film can be a catalyst to engage these issues and to care about justice issues,” he said. “When you think about it, Christian communities have been gathering around stories for 2,000 years … We’re still writing new stories about what it means to be that beloved community today.”

“I think the church is called to this work, to gather around story, to amplify voices that have been silent and to really find those counter stories and challenge those dominant narratives that perpetuate these systems that dehumanize people,” Barnhart said.

Just one determined person can have an impact on a community. Barnhart talked about a woman from Dayton, Ohio, who saw “Locked in a Box,” a film that critically examines the for-profit immigration detention system. She scheduled a screening at her church, telling fellow church members and friends, “We need to be talking about immigration detention centers. There’s a detention center 45 minutes from our church.” Soon the conversation became, “We need to organize visitation groups and get people aware of what’s going on in these for-profit detention centers. They’re making $165 [per detained person per day] and they’re just crushing families with this system.” 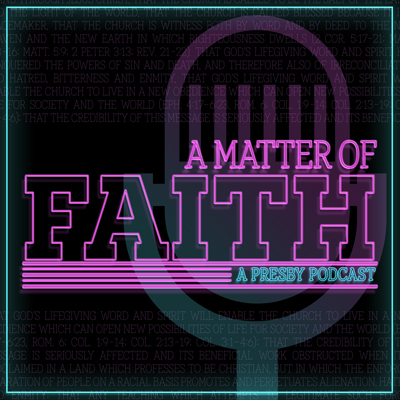 A new Presbyterian Church (U.S.A.) podcast, “A Matter of Faith,” drops every Thursday.

That led to a second screening at another Dayton church. Then “they decided to involve other faith groups,” Barnhart said, including a local synagogue and mosque. “They even went to the Dayton Opera, which performed an immigration-themed opera,” Barnhart said. “In six months, this group grew from one person who’d seen the film to this film forum to talk about the justice issues around immigration detention. To me, that’s ministry.”

The creative impulse behind making films and podcasts “gets back to the original way of how the gospel, how the love of Christ, was shown and spread,” Catoe said. “It’s interesting we are all in this creative space. That’s kind of how it was at the beginning.”

“I have so many friends who would not set foot in a church,” Barnhart said. “But they’ll listen to a podcast and they’ll go to a film screening. It’s a new space we’re in right now. It’ll be interesting to see where this goes.”