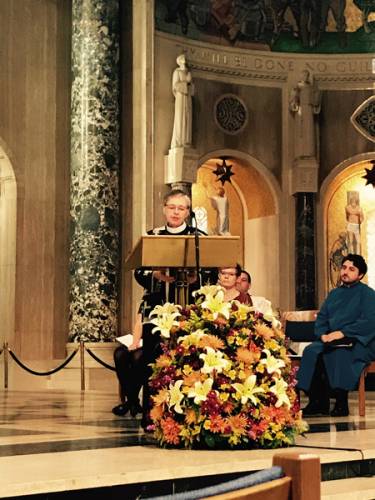 The Rev. Dr. Cynthia Campbell was one of the presiders at the National Reformed and Catholic Dialogue Ecumenical Prayer Service on the 500th anniversary of the Reformation on Oct. 16, 2017. (Photo courtesy Monica Schaap Pierce)

LOUISVILLE — Plans are under way to begin the ninth round of Roman Catholic-Reformed dialogue in the United States. The group of 14, which includes two elected people from each of the four Reformed denominations — the Presbyterian Church (U.S.A.), the Christian Reformed Church in North America, the Reformed Church in America, and the United Church of Christ, along with six Roman Catholic representatives, will review the Joint Declaration on the Doctrine of Justification (JDDJ), approved by the Lutheran World Federation and the Catholic Church.

The Rev. Dr. Cynthia Campbell, who retired this year as pastor of Highland Presbyterian Church in Louisville, was co-chair of the eighth round of talks (2012-2017).  She said the JDDJ essentially says that Lutherans and Catholics no longer disagree about justification, which was the crux of the issue in the disputes leading up to the Reformation. And by stating that the churches now share “a common understanding of our justification by God’s grace through faith in Christ,” the JDDJ provides a way for the Roman Catholic-Reformed dialogue to focus less on doctrinal issues and more on the theology of justice ministry work.

“Now, the whole question of justification needs to be discussed in terms of justice,” Campbell said. “With the fruit of grace operating in our lives, how does doing justice and walking humbly with God fit and relate to us being justified?”

Campbell said the late Rev. Robina Winbush was largely responsible for justification being the topic for the ninth round of Roman Catholic-Reformed dialogue. As past director of Ecumenical and Interreligious Relations in the PC(USA)’s Office of the General Assembly, Winbush is remembered as a fierce advocate for justice who supported the work of the Reformed community. So when the Lutheran World Federation came to the World Communion of Reformed Churches asking the organization to consider signing on to the JDDJ agreement, Winbush recommended that justification and justice be the topic for the next round of talks.

“We’re grateful for her work that has gotten us to this place in building up our ecumenical and interreligious relationships,” said Dr. Dianna Wright, interim director of OGA’s Office of Ecumenical Relations. “The current state of the world, especially in these days and years of COVID-19 and with the disparities it uncovered, provides us with a clear call to continue this important work.”

Wright stressed the importance of the dialogue team creating opportunities for congregations to benefit from the work they’ve done. As an example, she points to a joint baptism certificate and study guide that members of the dialogue team are working on, made possible because of the seventh and eighth rounds of discussion. 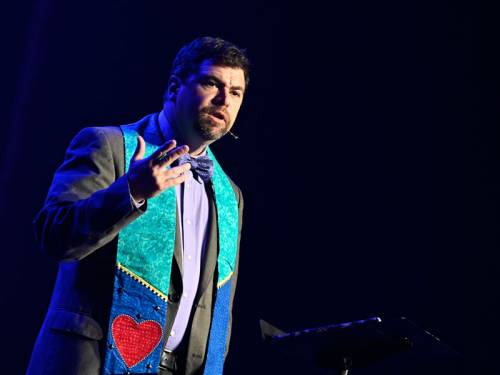 The Rev. Dr. David Gambrell said participating in the eighth round of Roman Catholic-Reformed dialogue in of U.S. was one the highlights of his work. (Photo by Rich Copley)

The seventh round of talks led Catholic and Reformed Churches to a mutual recognition of each other’s baptism. The eighth round focused on issues of church ministry and polity. The Rev. Dr. David Gambrell, associate for Worship in the PC(USA)’s Office of Theology and Worship, participated in those conversations.

“We were seeking consensus around historically divisive issues,” he said. “Asking questions like who can be ordained? Can we recognize each other’s ordination? Who oversees ministries? What is the relationship between bishops and presbyteries?”

Campbell said the dialogue around those questions led to some very fine work. The Reformed churches recognized that the abuses the reformers rightly pointed out in the 16th century no longer exist. Bishops today do not have political or civil jurisdiction and their office in the church is completely understood as teaching and pastoral.

Conversely, Campbell said, many of the Roman Catholic bishops didn’t understand how seriously the Reformed tradition takes ordination by not ordaining anyone easily or lightly, especially clergy. But the process of preparation helped them see the Reformed Church understands that offices of ministry involve oversight — and that the health and well-being of the church is entrusted to pastors and elders.

Campbell said that as is often the case, participants came out of these dialogues with a much deeper appreciation of the values they held in common, rather than the things that divide them theologically.

“One of the key points made is that we can affirm each other’s office of ministry,” she said.

This already happens informally — Gambrell pointed out when there is crisis in a community, Reformed and Catholic leaders get together to figure out how to best serve the larger good. All participants wanted to celebrate and build on this, as the dialogue continues.

For Campbell, one poignant moment came as the group was discussing the ordination of women. Her co-chair was the Most Rev. Tod Brown, bishop emeritus of the Diocese of Orange in California. As they got to the question of calling and the Holy Spirit giving gifts, Campbell said Brown turned to her and said, “Cynthia, of course we understand you’re called.”

“And the whole room went silent,” she said, “as if something had moved them in the room.”

Perhaps the Holy Spirit was working in and through the values they had in common — values like practical respect, working together for good, noticing and cherishing one another — and lifting up and reminding one another that this is how to live together.

Rick Jones of the Office of the General Assembly contributed to this report.