Anniversary is an opportunity to reconsider history and change thinking 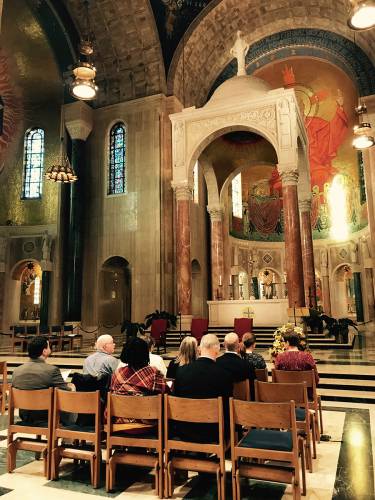 LOUISVILLE — As Presbyterians prepare to commemorate the 500th anniversary of the Reformation this Sunday two prominent Presbyterian Church (U.S.A.) theologians say it is an opportunity for the church to reconsider history — and how it tells the story of the past 500 years.

The Rev. Dr. David Gambrell and the Rev. Dr. Charles Wiley of the Presbyterian Mission Agency believe that while the Reformation divided us, we are now witnessing a convergence of the traditions that were separated. They say this presents an opportunity to focus on the gifts we have received from each other and to celebrate what we share.

For past five years, Gambrell participated in the eighth round of Roman Catholic-Reformed dialogue in the United States (2012–2017). This dialogue builds on the work of previous rounds — especially the 2013 Mutual Recognition of Baptism that came out of the seventh round.

“We were seeking consensus around historically divisive issues,” says Gambrell, “asking questions like ‘Who can be ordained? Can we recognize each other’s ordination? Who oversees ministry? What is the relationship between bishops and presbyteries?’”

Gambrell points out the acknowledgment of each other’s ordination already happens, informally. When there is a crisis in the community, Reformed and Catholic leaders get together and figure out to best serve their communities — which participants believe is something to celebrate and build on, as the dialogue continues.

“Instead of continuing to fight the battles of the 16th century, we have a chance to change our way of thinking,” says Gambrell, “to reconsider the gifts we’ve received from one another.”

The gifts of Protestants and Catholics will be on display at an upcoming “Commemorations of the Reformations” service at the University of Notre Dame. Wiley, along with Evangelical Lutheran Church in America, Episcopal and Roman Catholic bishops, will be one of the co-presiders at the November 5 service.

“It’s an incredibly generous act by a Roman Catholic bishop to invite us to commemorate the Reformation at the Basilica of the Sacred Heart,” says Wiley. “This event would have been unthinkable decades ago, let alone centuries ago.”

According to Wiley, the service will celebrate the gifts of the Reformation and acknowledge its sin on behalf of all the participants.

In the Rite of Repentance, these are the words he will share:

As this commemoration brings joy and gratitude to expression, so must it also allow room for all Christians to experience the pain over failures and trespasses, guilt and sin in the persons and events that are being remembered. The Gospel was mixed with the political and economic interests of those in power. Failures resulted in the deaths of hundreds of thousands of people. Families were torn apart, people imprisoned and tortured, wars fought and faith misused. Human beings suffered and the credibility of the Gospel was undermined with consequences that still impact us today. And so, let us ask God for mercy and forgiveness.

Wiley sees Luther as a valuable and important reformer of the whole Western Church, not just the reformers. But he believes it’s also true that during the protest Protestants left behind gifts.

“We are the poorer for doing so,” he says. “Reformation 500 gives us an opportunity to treasure the good that we bring to each other.”

After the scripture reading and homily (sermon), each co-presider in the service will pray and thank God for the diverse traditions in all of the churches. One thing Wiley will give thanks for is, “Roman Catholics’ celebration of Mary as the first of Jesus’ disciples.”

“One of the most powerful parts of the service reflects a poignant irony,” says Wiley. “This thanksgiving is a prayer service because we cannot celebrate communion together. “

“Even in our thanks, this service demonstrates both hope and a reminder of a fractured church.”

Gambrell has a lasting image from his time spent with other participants in the latest round of Roman Catholic–Reformed dialogue. At their final service of worship together they were surrounded by scaffolding at the Basilica of the National Shrine of the Immaculate Conception, which has been under construction for 100 years.

“Being surrounded by construction materials, and yellow tape marking off the dangerous places, reminded me of the long term, painstaking process of reformation,” says Gambrell. “Still, we worship together to glorify the one God we share. One day we will enjoy full and visible unity with one another in Christ.”

Most Rev. Tod Brown, bishop emeritus of the Diocese of Orange, and Rev. Dr. Cynthia Campbell, pastor at Highland Presbyterian Church, Louisville served as co-chairs of the dialogue.