…be led forth in peace. (Isaiah 55:12). Support to the Peace & Global Witness Offering.
Make A Donation Click Here >
Home › A year as a Young Adult Volunteer is ‘like being air-dropped in the middle of chaos’ 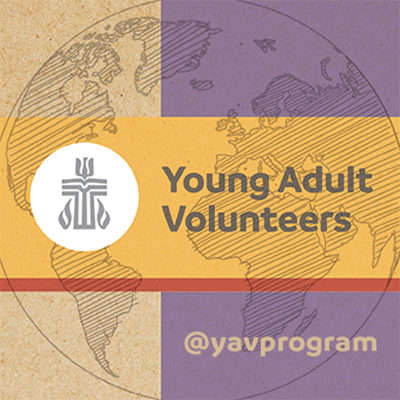 LOUISVILLE — For Monday’s Between Two Pulpits broadcast, Dr. William McConnell, interim director of Special Offerings, celebrated the start of the Young Adult Volunteer program year by talking to two YAV alums who were equal parts passionate and practical about their own YAV experiences.

Eni served as a YAV in Glasgow, Scotland, during 2016-17. Larson served from 2014-15 at the West Side Christian School in Chicago. Both completed seminary studies after their year of service.

Eni called the YAV opportunity “an invitation to grow up and pay attention together.”

“In our denomination we are really privileged to have a program like this that supports young people as they explore a place that’s probably different than where they’re coming from and get to learn about the different ways poverty manifests itself in our world,” she said.

Larson offered this year’s YAVs some advice: “Get as comfortable as you can with the idea that the whole year is going to be uncomfortable. That doesn’t sound especially encouraging,” she told McConnell, but “you will start learning new things about yourself and the ways you fit into the work God is doing in the world.” 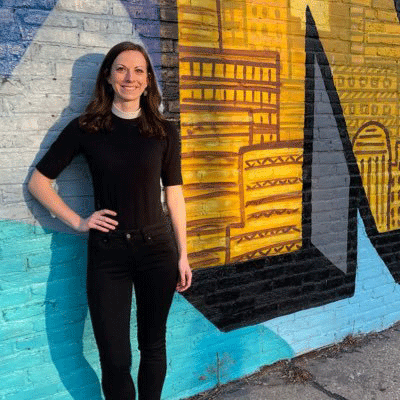 “Know that ‘a year of service for a lifetime of change’ is our slogan, and it’s no joke,” Larson said. “Do your best to find the balance between allowing yourself to be challenged and pushed and being gentle with yourself and opening yourself up in all the ways you can to give and receive and share the grace of God that will be made known to you in many surprising and creative ways.”

“That sounds like good advice for all of us,” McConnell said, asking the two what surprised them about their year of service.

“Everything, really,” Larson said. “To be plunked down in a place that’s very urban, very different from what I had grown up with — it was challenging to find my own way in a place that was very much unfamiliar to me.”

Eni, an immigrant to the United States, said that part of the draw to serving internationally was the chance “to leave the place I had called home for most of my childhood.”

“There is a world that exists outside the U.S., and it can be really difficult for us to get that. Being in the U.K. in a challenging political time in one of the poorest communities in the country and seeing ways that God is working in really strange, wonderful, stressful and delightful ways was such a beautiful reminder for me that I exist in the world with other people and this is what it could look like.”

What was it, McConnell asked, that they wish they’d been told at the start of their YAV year?

How “challenging and rewarding” it would be, Larson replied, to live in intentional community.

“You don’t think what that will look like, sharing space with people you’ve never met,” she said. “You have to figure out how to live and do life together. My housemates are some of the people I value most in his world. The relationships I shared with them mean so much to me.” 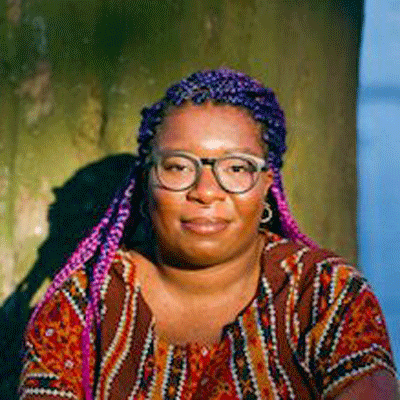 “It gets said at orientation, but they’ve to drill it in more that the year might be challenging,” Eni said. “Poverty looks different in different places. We are talking about systemic issues, like cities that have not been resourced for decades, even centuries. There are stresses that come with that you aren’t expecting. I describe being a YAV as being air-dropped in the middle of chaos. I think I experienced that most of the year. Getting uncomfortable and knowing it won’t be fixed during the year is a thing.”

That said, “if we can’t have fun and find joy and adventure in what we’re being called to do, there’s not point,” Eni said. She advised this year’s YAVs to “create time to really enjoy the year, because it’s possible.”

It may be that YAVs forge a similar path to those of Larson and Eni and complete seminary studies following their YAV year, Larson said, but “it’s not true for all people. You might uncover a call and a desire to go to seminary and serve a church, or it might mean you find other ways to serve the greater church. Ministry happens in all kinds of places and in all kinds of vocations.”

“‘Make mistakes and get messy,’ as Miss Frizzle says on ‘The Magic School Bus,’” Larson urged.

Young Adult Volunteers are supported by the Pentecost Offering. Sixty percent of the offering goes to the national church to support work with youth, young adults and children at risk. Forty percent stays for local uses as churches see fit in those areas of ministry. Learn more here.

Sunday is Commissioning Sunday for Young Adult Volunteers across the PC(USA). Read about it here.