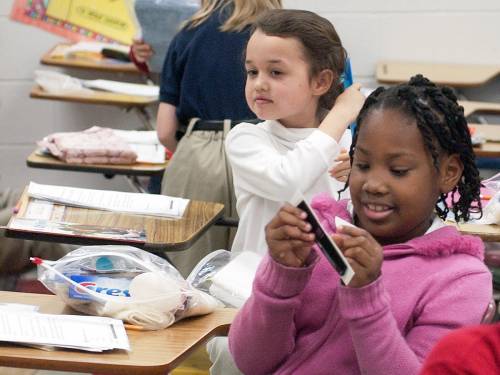 Children whose lives were upended by hurricane damage on the Gulf Coast enjoy hygiene kits like the ones that will be assembled by Presbyterians in Ashtabula County, Ohio, in partnership with Presbyterian Disaster Assistance. (Photo by Christy Pritchett/Church World Service)

LOUISVILLE — While Lent is widely viewed as a journey of introspection, some Ohio Presbyterians, inspired by their support for One Great Hour of Sharing, also see it as an opportunity for mission action.

On Saturday, the eight congregations in the Ashtabula County cluster of the Presbytery of the Western Reserve will begin an effort to assemble 500 hygiene kits. Local agencies will distribute half of the kits to people in the county struggling with addiction and poverty, and Presbyterian Disaster Assistance (PDA) will share the other half with disaster survivors nationally and internationally.

PDA encourages and guides congregations and others wanting to assemble kits. Each kit contains a hand towel, washcloth, a nail clipper, a bar of soap, toothbrush and adhesive bandages.

The need for hygiene kits is particularly acute in Ashtabula, where the opioid crisis is rampant and poverty is widespread. Many people there are in transition and are moving through incarceration, probation, and the drug rehabilitation process, said Mark Mong, pastor of Trinity Presbyterian Church in Ashtabula. Some of them lack the necessities for good hygiene and grooming, he noted. “We recognize this is a profound need, and so here is an act of love to be used wherever they find themselves, whether it is on the street, or in a rehab center or in jail or in one of the halfway houses or wherever.”

Ashtabula County, whose largest city bears the same name, is among places in the United States where the opioid crisis has hit hardest, said Michelle Bartel, pastor of East Side Presbyterian Church in Ashtabula. A recent Washington Post article cited statistics that reveal this northeastern Ohio county recorded 39 drug overdose deaths in the United States in 2016, up from five a decade earlier.

Once the busiest port on the Great Lakes, the port traffic and manufacturing jobs that kept Ashtabula’s economy humming a generation ago are long gone. “Ashtabula now has a third of the population living below the poverty line,” Bartel said.

Both pastors say Lent is an opportune time to engage in a service project in Ashtabula and elsewhere. Presbyterians traditionally emphasize mission during the Lenten and Easter seasons through participation in the One Great Hour of Sharing offering. Mong and Bartel draw a connection between the mission emphasis of One Great Hour of Sharing and the hands-on mission action related to the hygiene kits.

In addition to PDA, the Presbyterian Hunger Program and Self-Development of People are also supported by One Great Hour of Sharing.

Mong sees mission not from a sense of being patrons to people but of contributing to their empowerment. “The whole purpose of One Great Sharing and the whole purpose of Lent and Easter, at least in my mind, is that we need others more than perhaps they need us,” he explained.

Lenten practices such as repentance, penitence and seeking wisdom inevitably lead to service, Bartel said. “Service and introspection are certainly not separated if we are responding to God’s call to join God’s work in the world.”

In Ashtabula County, Presbyterian congregations are viewing Lent “as an opportunity to share ministry and increase their capacity for compassion,” observed Sharon Core, general presbyter for the Presbytery of the Western Reserve. She added that “their hearts are leading their hands in the making of hygiene kits.”

“I am excited for the commitment of these congregations and hope their example inspires other congregations to explore and engage in shared ministry,” Core said.