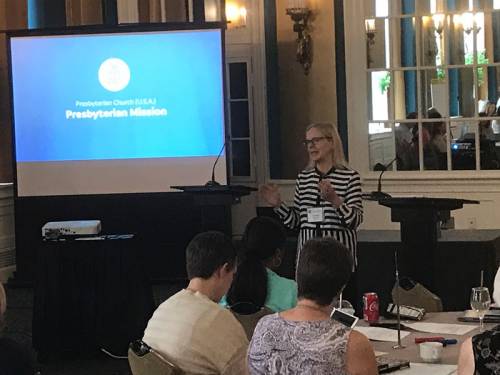 The Rev. Dr. Laurie Ferguson worked with the Presbyterian Mission Agency Board and mid council leaders to help discern priorities as part of the 2021-22 budget process. (Photo by Mike Ferguson)

BALTIMORE — In advance of building the 2021-22 Presbyterian Mission Agency budget and approving the agency’s work plan, the PMA Board and representatives from about two dozen mid councils are meeting together for two days following Big Tent to discern the priorities of both groups.

The Rev. Dr. Laurie Ferguson, a pastor, therapist and organizational consultant from Tappan, N.Y., led the groups through a discernment process Sunday and Monday. Seated together at round tables, invited mid council executives and PMA Board members held what PMA Board Chair the Rev. Joe Morrow called a “participatory, collaborative conversation,” including expressions of appreciation for one another’s work as well as that of the PC(USA) staff seated behind the nearly 50 people working together.

In a letter to participants, Morrow said the consultation “will enable the PMA Board to hear from you and engage in conversations with mid-council leaders on how PMA may or may not be aligned with mid-council ministry needs in the field. It will provide meaningful feedback and advice to the PMA Board on narrowing its list of PMA mission priorities, which will impact its next budget cycle.”

Based on General Assembly actions dating back to 2008, the Presbyterian Mission Agency has identified a dozen priorities for work in the coming years. Also included is a description of the work that’s been done on each item. In alphabetical order, the 12 priorities are:

After hearing a Bible study on Matthew 25:31-46 by the Rev. Dr. Diane Moffett, the PMA’s president and executive director, the two groups told each other — and national staffers who were present to answer questions — what they appreciate about each other’s work.

Mid council leaders were thanked for being “the glue of the church,” for providing “fearless leadership and not being afraid to fail,” for “making (stuff) happen,” for being “the foundation of the connectional church,” for “doing the work the church expects sometimes without the resources to do that work,” for “all the times you’ve had to say ‘no’ for the fidelity of the gospel,” and for being “partners and challengers,” among other accolades.

Mid council leaders then thanked the PMA Board for these things, among others: having the courage to change, dealing “with mundane stuff and having vision,” “standing up for justice when it is unpopular,” and for members’ “commitment to service in challenging times.”

In addition, both groups thanked PMA staff in attendance.

After lengthy discussion around the tables, the groups couldn’t reach consensus on pushing any of the 12 priorities to the top of the list.

“These are needs, no doubt,” said Warren Lesane, the PMA Board’s vice chair. “But I don’t see a lot of risk-taking. We are comfortable Presbyterians. I don’t get in my gut our willingness to take risk.”

Asked to report on the discussion around each table, numerous needs emerged. Among them:

The Rev. Dr. Ray Jones, director of Theology, Formation and Evangelism, said that after hearing the Rev. Dr. Renita Weems preach last week at Big Tent on Reuben’s attempts to appease his brothers, “I don’t want to appease people anymore. I don’t want to compromise with things that are evil to make people happy. Developing disciples and congregations to dismantle racism and poverty — that’s what I’m committed to.”

The Rev. José Luis Casal, who’s retiring Aug. 15 as director of World Mission, said he too was moved and challenged by Weems’ sermon — “not to be the older brother who didn’t heal the dreamer (Joseph), no. I was moved to be the dreamer … Allow us to dream with you in your neighborhoods and in your local congregations. This is the only way to be the church … Help us and help yourselves. That’s my only recommendation to this group here.”

On Monday, the Board voted to use a document developed over the two days of meeting as a working tool for advancing the upcoming budget process.

Included in the document are such outcomes as standardized training for commissioned ruling elders, reserving funds for General Assembly priorities, leadership development for mid councils and the dissemination of Matthew 25 stories already occurring across the denomination.