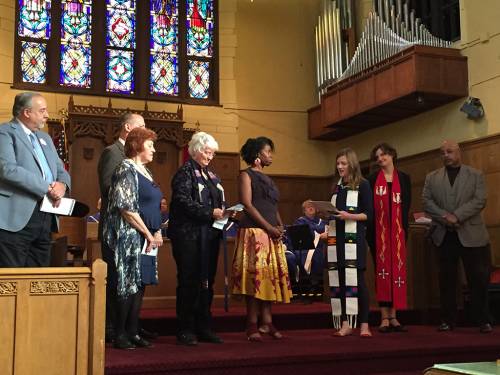 LOUISVILLE – When the Rev. Terilyn Lawson was installed on Sunday, October 23, as associate pastor of First Presbyterian Church, Great Falls, Montana—and concurrently as the first resident in the Chaplain Candidate Residency Program newly launched by the Presbyterian Council for Chaplains and Military Personnel (PCCMP)—she had to marvel at what God had done.

Only a few short years ago, the theologically-trained Lawson, who received her M.Div. in 2010 from Fuller Theological Seminary in Pasadena, California, found herself unfulfilled and underemployed in a job for which she was clearly overqualified, when a stroll through the mall changed the course of her life.

“I was in the mall, which has a recruitment office,” Lawson recalled, “and as I was walking to my car, I saw United States Armed Forces recruitment posters and I thought, ‘That would be interesting, what if…,” and that ‘what if’ became, ‘I’m going to do that.’”

Although she can’t fully explain why, Lawson was drawn to the United States Navy. On the one hand, it was the Navy’s age requirements for chaplains—“I was 31, so I knew my time was growing short,” she said—and on the other hand, she had both an uncle and a pastor who were in the Navy.

And then there were those uniforms.

“As superficial as that is, I like the uniforms,” she said with a laugh. “And then on top of that, like in the movie, ‘A Few Good Men.’ They’re in the Navy, and they’re really clean and crisp. So that was my connection. Those uniforms are pretty sharp.”

But the very same Navy requirements that first attracted Lawson would ultimately present her with a series of challenges—although not insurmountable ones—for someone who had always said she was determined not to be ordained as a teaching elder. Ordination is one of the qualifications for service in the Navy’s Chaplain Corps in order to be endorsed by the Presbyterian Church (U.S.A.) through its endorsing agency, the PCCMP.

“So the recruiter is looking at my resume,” she said, recalling that pivotal day in the mall, “and he says the Armed Forces is like any job market—if your skills are what the military needs, you’ll be hired. ‘I’m seeing a lot of theological training on your resume,’ he said. ‘Have you ever thought about being a chaplain,’ and I said, ‘No, I hadn’t.’ I was actually running from anything church-related, and that question, to me, was God’s way of saying, ‘You know what? Until you do what I’m asking you to do, nothing else is going to be fulfilling and you’re always going to be searching in order to be satisfied.’ So what it did was it had me pause and basically submit.”

Lawson, at the time a ruling elder at Angeles Mesa Presbyterian Church in Los Angeles, acknowledged that what had been so clear to others—that her calling necessitated ordination as a minister of Word and Sacrament—finally became “unequivocally evident” to her.

“With this resolve, my next step was to evaluate what chaplaincy would entail within the military context,” she said. “What I discerned was that I would be responsible for the spiritual formation, religious instruction, and faith guidance of young adults—youth essentially. I realized upon this discovery that my path is leading me to work with youth.”

Soon after initiating the ordination process in 2012 with the Committee on Preparation for Ministry in her home presbytery, the Presbytery of the Pacific, Lawson contacted the PCCMP to let the agency and its director know of her interest and plans. Then, after becoming certified ready to receive a call in September 2015, Lawson again called the PCCMP to update its director, the Rev. Dr. Larry Greenslit, on her progress and touch base as to next steps.

It was then that she learned of another potential hurdle.

“So once again, I was stopped dead in my tracks,” Lawson again said with a laugh. “Since I had started the ordination process, the requirements for Armed Forces chaplaincy had changed, so I had to make certain adjustments. Initially you could become ordained, apply, and be commissioned. Now the Armed Forces requires two years of pastoral service.”

In that conversation, Greenslit recommended several possibilities to Lawson as she sought not only to be ordained, but also to fulfill the Navy’s two-year pastoral service requirement.

Greenslit suggested that Lawson call the Rev. Dr. Les Hyder, executive presbyter/stated clerk of the Presbytery of San Joaquin, who serves on the Board of Directors of the PCCMP. Under Hyder’s leadership, a new Chaplain Candidate Residency Program residency program was developed and funded. The program seeks to identify congregations that will serve as “teaching churches” and will agree to employ individuals seeking two years of ordained experience. To launch and fund the program, the PCCMP received a pilot grant of $25,000 from the Pastoral Excellence Network (PEN) to assist congregations to support a resident on their staff. 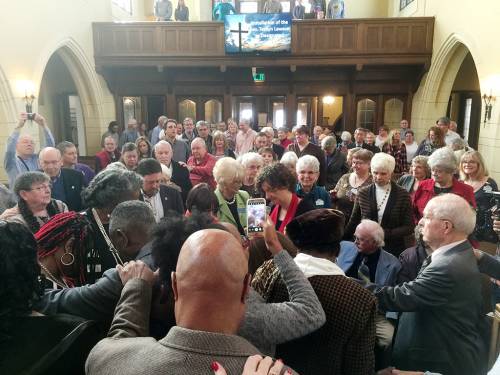 The laying on of hands at the Rev. Terilyn Lawson’s installation service, October 23, 2016. (Photo by Larry Greenslit)

“Understandably, it is challenging to seek a call when the calling agency knows that a candidate is already looking to apply elsewhere within two years,” Greenslit said. “Presbyteries, of course, are integral to this process. In Terilyn’s case, the staff of Glacier Presbytery has responded magnificently to the idea of a residency program.”

Lawson, who is the program’s first resident chaplain candidate, was ordained at her home church, Angeles Mesa, on September 25, and installed on October 23 at the First Presbyterian Church of Great Falls, Montana. The second chaplain candidate, Jamieson Prevosnak, will begin his ministry in January 2017 at the First Presbyterian Church of Richmond, California.

“These congregations are both located near large military facilities to retain a contact with the military community,” Hyder explained. “The residency covers two years of service to gain in-depth ministry experience and build a strong relationship with their denomination before going on active duty.”

For Lawson, that will mean establishing a relationship with Malmstrom Air Force base, a 15-minute drive from the church.

“Because of where the church is located, there may be people that the church would like to reach out to but with whom it doesn’t have a connection,” Lawson said. “With me being here as the associate pastor—and potentially joining the Air Force or Air Force Reserves or being a volunteer—it’s a connection for those who are in the Air Force and maybe want a church outside of the base. It’s not so much me recruiting because the Armed Forces isn’t really into that, but I would be a representative, a presence on the base.”

“Terilyn is a vibrant person, whose obvious love of Christ, delightful sense of humor, artistic abilities, and infectious smile will serve her well as she serves God,” Anson said. “We are so pleased that we get to be in ministry with her.”

Anson added that the congregation and its pastor, the Rev. Steve Hundley, share in her excitement at taking part in the innovative chaplain candidate residency program.

“They are nurturing and caring by nature, and will excel at helping Terilyn achieve her goal of serving as a military chaplain in a few years,” she said. “We are so glad that God has allowed us to have this opportunity to launch this new program and to be a part of Terilyn’s life and ministry.”

Lawson is just as glad.

From her first interview with the church’s search committee, Lawson knew that Great Falls was a great fit.

“The draw for me was in the people I was meeting in Great Falls,” she said. “They were very warm, open, inviting, and really excited about the possibility of me serving there. Going back to statements that I have made before—wherever God leads me, I will go, regardless of where— and then being true to that statement, and not saying, ‘Anywhere but there, God.’ And Great Falls was it.”

The PCCMP is currently seeking additional churches to serve as teaching congregations by accepting a resident. The agency stands ready to assist interested congregations in completing the residency grant application. Further information is available by emailing the Rev. Dr. Larry Greenslit or the Rev. Dr. Les Hyder.