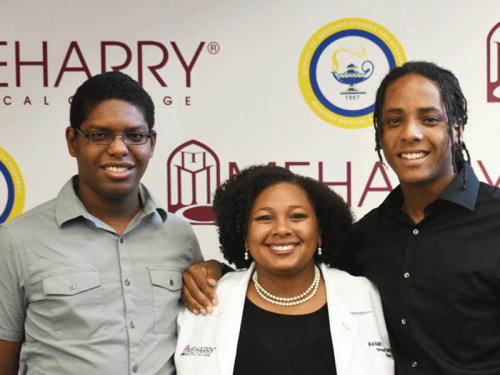 Akiya Hyrams, a former Young Adult Volunteer, stands between her brothers Jamal, at left, and Aman during a White Coat ceremony marking the beginning of her medical training. (Contributed photo)

LOUISVILLE — Although the branches of their respective family trees are heavily laden with Presbyterian pastors and elders, Akilah Hyrams and Noah Westfall — both alums of the PC(USA)’s Young Adult Volunteer program — are pursuing a different calling.

At least for now.

“The saying goes, ‘you can’t choose family,’ but I wouldn’t change a single thing about mine,” Hyrams said, acknowledging that not only her mother, but also her father, Kevin, and brothers, Jamal and Aman, have been “consistently supportive and a source of unconditional love during the many twists and turns of my life.”

In fact, it was her mother who first connected Hyrams with the YAV program while she was thinking about taking a gap year following her rigorous undergraduate studies at Hampton University in Virginia.

Meanwhile, across the country at Santa Clara University in California, Westfall — the son of two physicians, Jack Westfall and Audrey Yee — was considering doing the very same thing.

Both now credit their gap years in the YAV program not only with strengthening the foundations of their faith, but also with leading them toward their chosen careers in public health.

The YAV program is an ecumenical, faith-based year of service for young people ages 19–30 in sites across the United States and around the world. Hyrams, a 2022 graduate of Meharry Medical College in Nashville, Tennessee, spent her 2016–17 YAV year serving in the Philippines, while Westfall was placed with the YAV site in Austin, Texas.

YAVs accompany local agencies working to address the root causes of poverty and reconciliation while simultaneously exploring the meaning of their Christian faith and accountability to their neighbors in the community with peers and mentors.

Young adults like Hyrams and Westfall who are seeking spiritual growth and vocational discernment through the YAV program are supported, in part, through the Pentecost Offering, one of the PC(USA)’s four Special Offerings. Not only do gifts to the Pentecost Offering benefit the YAV program, but the Offering also supports the Youth Triennium and the “Educate a Child, Transform the World” national initiative. A hallmark of this shared offering is that 40% of it is retained by individual congregations for local ministries, while the remaining 60% is used to support children-at-risk, youth and young adults through ministries of the Presbyterian Mission Agency.

Although the Pentecost Offering may be taken anytime, most congregations receive it on Pentecost Sunday, which this year falls on June 5.

Upon first discussing the YAV program with her mother, Hyrams said that they both knew instantly it was the kind of program she was looking for, especially the opportunities it offered to travel to other countries.

“The YAV program wasn’t a missionary program that most people associate with church volunteers, but rather it provided me with an opportunity to immerse myself in a community and culture that was very different from my own,” said Hyrams. “I knew I wouldn’t be going abroad to impress my ideas upon others but would instead be listening to and understanding the life experiences of others.”

Because of the interest Hyrams had already expressed in pursuing a medical career, her YAV site coordinator in the Philippines was able to customize her YAV experience based on her vocational aspirations and interests.

“Volunteering in health clinics was an amazing opportunity that my site coordinator was able to put together for me, which I am so grateful for,” she said. “Since I was just coming out of undergrad, I hadn’t had much hands-on medical experience. Working in the clinics solidified for me that medicine was where I was being led.”

Westfall’s direction at graduation was somewhat less clear. With an undergraduate major in philosophy, he found himself seriously questioning whether he could find a practical application in his field of study.

“Since there aren’t a lot of jobs in philosophy, I wondered how I might best use my love of thinking and asking questions, and then I learned about the YAV program,” he said, also citing an immersion trip to East Los Angeles during his senior year as a defining moment in his journey toward becoming a YAV. “Because my church also offered to help support me, the program seemed like a great opportunity to take a year to explore more of my interests and try to figure out what I wanted to do.” 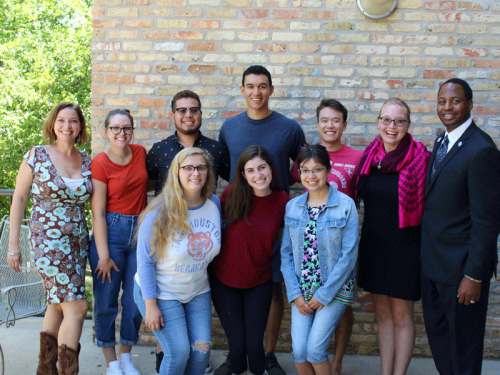 “I was really excited that I was able to do my year in Austin, especially because we lived on the seminary campus,” he said. “Because I often thought throughout college and growing up about the possibility of going to seminary, I thought this would be a good opportunity to dip my toe in that world. Living together with four other YAVs and four AmeriCorps volunteers was probably the most impactful for me. We had weekly meals and did workshops and group activities together. They really became my best friends during that year.”

Working at Texas Impact also gave Westfall his first experience of the policy-making process, which was excellent preparation for his current role as program coordinator for the Primary Care Collaborative. He joined the Washington, D.C.-based health-care advocacy nonprofit in the spring of 2021, after first earning a Master’s in Public Health from George Washington University.

Both at Texas Impact — where he worked on a major research project on faith-based investment in Hurricane Harvey recovery — and now at the Primary Care Collaborative, Westfall has had an opportunity to explore and address the negative health impacts caused by environmental racism.

“Noah’s family and this congregation nurtured a servant’s heart in Noah,” said the Rev. Dr. Louise Westfall, senior pastor at Central Presbyterian Church in Denver. “His decision to participate in the YAV program grew out of a desire to be of service to the wider world and make a positive difference. The YAV program was instrumental in broadening Noah’s experience of PC(USA) mission, particularly in advocacy for justice.”

Westfall’s determination to challenge injustice while serving in Austin exemplifies just one of the ways that the YAV program intersects with the PMA’s Matthew 25 initiative, according to Destini Hodges, the YAV program’s coordinator.

“The YAV program continues to walk alongside young adults just like Noah and Akilah to help with their vocational discernment in areas such as race, poverty and church vitality, the three foci of Matthew 25,” said Hodges, “Many times, YAVs are able to experience the intersection of all three of these pillars within their placements. Learning the complexities of structural racism and systemic poverty through a Christian faith perspective allows them to develop these skills and apply them to the future calls.”

In Hyrams’ YAV placement, not only did she experience the intersection of race and faith vocationally, but she also lived it somewhat more personally.

She described having served for two weeks as a counselor at the local church’s Vacation Bible School, where she worked with the neighborhood’s preschoolers and kindergartners. During the second week of VBS, her team went out to more rural areas to hold classes for the children.

“Regardless of the socioeconomic challenges, the children in the rural areas were just as smart and as eager to learn,” Hyrams observed. “It amazes me how resilient and energetic kids are!”

And although she said she will never forget her overall experience in the Philippines, her happy times were often eclipsed by formidable challenges.

“I was body shamed during my first few days in the country,” Hyrams said with a lump in her throat. “I had children pull my hair while I was sitting and eating. I assume they had just never seen curly hair like mine, but it was a painful experience, nonetheless. Homeless children came up to me and touched my skin without permission because they had never seen a foreigner as dark as they were.”

But despite her experience — or perhaps because of it — Hyrams said that she is “really hoping to inspire more BIPOC [Black, Indigenous, People of Color] youth to get involved in the PC(USA) and apply to the YAV program in particular.”

Hodges joins in championing that cause.

“The Pentecost Offering supports the demographic of the church that is vital to our existence,” said Hodges. “It is our Christian duty to equip, educate and elevate youth and young adults during their discernment as Christians.”

Hyrams adds, “When you donate, you’re supporting someone through a life-changing experience, which looks different for everyone,” she said. “Even if you don’t personally know the YAV, knowing that others are supporting you can really make a difference. We get homesick, have good days, have bad days, see amazing things we thought we’d never see, and see things that hit a bit too close to home. These experiences open our eyes and broaden our horizons. Those who apply to the YAV program should have the opportunity to experience it to the fullest without having cost be a barrier. Thank you for any support you can give. You’ll never know how much it truly means to each and every one of us!”

Support the YAV program by giving to the Pentecost Offering.