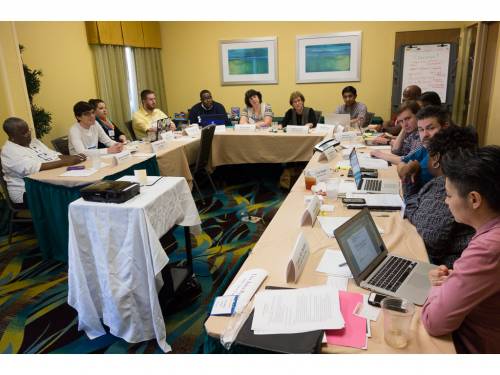 IRVING, Texas – The 2020 Vision Team of the Presbyterian Church (U.S.A.) met here last weekend to begin the work requested of them by the Way Forward Committee of the 222nd General Assembly (2016) in creating a vision statement for the denomination.

“At the 11th hour we decided we needed to get a group of Presbyterians together to look at the future,” said Justin Botejue, a Young Adult Advisory Delegate from Spokane, Washington, who was on the Assembly’s Way Forward Committee. “We know several other denominations have vision statements, guiding statements… So we asked, what does that look like for the PC(USA)?”

“We hope the vision statement that comes out of this committee will be something for the whole church, including PC(USA) staff members, to use as a statement to guide their work,” he added.

Led by co-moderators Bernie Coffee, a ruling elder from Tres Rios Presbytery, and Lisa Juica Perkins, a teaching elder from Grace Presbytery, the group of 15 representatives from around the church began their work by building a covenant of understanding to guide conversation during the work ahead.

Using results from the “When We Gather at the Table” survey and a compilation of information from 2014 General Assembly Moderator Heath Rada’s listening sessions, the team is charged with listening to a broad cross section of constituency groups within the PC(USA) to “discern where the Spirit is leading the church in the future.”

Several members of the diverse team expressed frustration with these sources of information, saying they did not reflect the political realities or concerns of the communities in which they belong or serve. 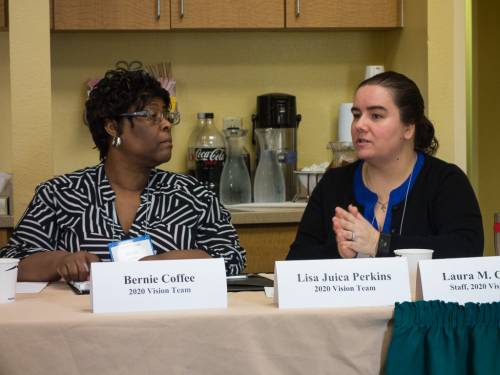 Co-moderators of the 2020 Vision Team Bernie Coffee and Lisa Juica Perkins at the group’s Feb. 11-12, 2017 meeting in Irving, Texas. (Photo by Gregg Brekke)

“When I read the report I see it as the moderator of the whole church saying what he sees across the church,” said Salvador Gavalda Corchado, a ruling elder from San Juan (Puerto Rico) Presbytery. “We could say that perhaps he doesn’t represent all of us. However, one of the benefits of us having a document and us saying we’re unhappy with what’s written here, is it lets us ask why is my voice—or the voice of others—not represented? So the question is, what is not represented in his words, because that’s where we should be headed.”

“We must find a way to make the diversity among us become a strength and not a weakness,” added Joshua Andrzejewski, a teaching elder from Presbytery of The James. “We don’t need to be uniform, but we can be unified.”

The team was also charged by the Assembly to “look outside the walls of the church” to find best practices and understand how those outside the church perceive the work of the church among local, national and international communities.

Much of the team’s time was spent identifying groups they need to engage in order to fulfill this charge and then formulating questions to ask of each group. The four discovery areas requested by the Assembly—congregations, presbyteries, synods and seminaries—were distilled into three broader spheres, specifically “the church,” “affiliated organizations,” and “those outside the church.”

Another topic of discussion was identifying the distinct goals of the 2020 Vision Team as it relates to the work of the Way Forward Commission and the All Agency Review Committee. Saying the Assembly had anticipated areas of crossover when it asked for these three groups to conduct their work concurrently, Debbie Foster, a teaching elder from Foothills Presbytery, said the Assembly had likened the work of the three groups to the effort required to save a sinking ship.

“The Way Forward Commission needs to patch up the holes,” she said of her understanding of this comparison. “The 2020 Vision Team is like the rudder to provide direction once that’s done.”

Expecting considerable feedback and shared information based on its relationships with the Way Forward Commission and the All Agency Review Committee, the 2020 Vision Team will conduct listening sessions throughout 2017 and make its initial report to the 223rd General Assembly (2018) meeting in St. Louis.

While some team members expressed optimism that their work could be completed by then, the co-moderators reminded the team they had four years in which to complete their work, urging them to see the 2018 report as a benchmark in the process that would continue until the 2020 Assembly with further guidance from the Way Forward Commission or the 2018 Assembly.

Joined briefly on Saturday via video call by Denise Anderson, Co-Moderator of the 222nd General Assembly (2016) of the PC(USA), she told the group, “I am so jealous right now. When we finalized who was going to be on the vision team I said this is going to be a great team… Even as I sermonize and get ready for a church that expects a sermon tomorrow, I am praying with you and for you.”

Questions intended for the three spheres will be submitted to PC(USA) Research Services for refinement before being used by regional groups in their conversations and survey of constituent groups. Team members plan to gather at the PC(USA)’s biennial Big Tent event and the Office of the General Assembly’s annual Polity Conference during 2017, both to engage church constituents in their questions and to provide an opportunity for face-to-face progress reports from the team’s regional groups.