Register today for the June 23 (2pm EDT) online Matthew 25 event that will look at hunger and food insecurities.
Make A Donation Click Here >
Home › Not good news for everyone

Jesus came to challenge us 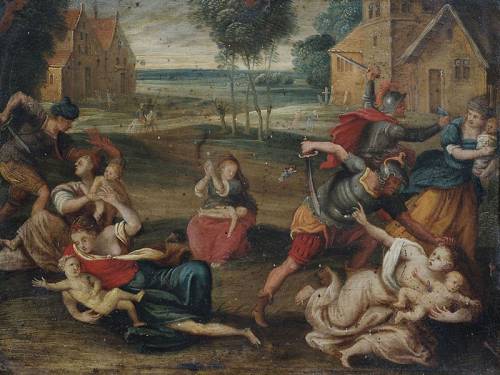 “Massacre of the Innocents” by Frans Francken the Younger (17th c.)

In the time of King Herod, after Jesus was born in Bethlehem of Judea, wise men from the East came to Jerusalem, asking, “Where is the child that has been born king of the Jews?” … When King Herod heard this, he was frightened, and all Jerusalem with him … When Herod saw that he had been tricked by the wise men, he was infuriated, and he sent and killed all the children in and around Bethlehem who were two years old or under. — Matthew 2:1–16

Herod and the people were justifiably frightened. A new king who would depose Herod? A new ruler who might be worse than Herod and could well change the lifestyle to which the people and their religious leaders had become accustomed? The social and political order was rightly troubled by the prospect of this new king, whose reign had been declared.

Fast-forward as this “king,” Jesus of Nazareth, stands before the Roman governor, Pontius Pilate, brought there by the church leaders who want him dead. They incite the people to call for the release of the notorious criminal Barabbas, rather than Jesus, in whom Pilate finds no criminal fault. So Pilate, pandering to the angry crowd, frees Barabbas and orders Jesus led to the cross.

Of course, that is not the end of the story. At least not for those who claim him as the risen Christ, the King of kings and Lord of lords, whose reign will have no end. And if we are right, then all of us, even those who believe most fervently, face the fact that this Jesus is a challenge to us and to our daily living.

As the old spiritual says, “Sweet little Jesus boy, we didn’t know who you were.” To fully understand who he was, we must hear his mother’s outpouring when the angel told her about her baby: He has scattered the proud in the thoughts of their hearts. He has brought down the powerful from their thrones, and lifted up the lowly; he has filled the hungry with good things, and sent the rich away empty (Luke 1:51–53). Not good news for everyone.

If it is true, as we proclaim, that the child of Christmas is the Living Word of God with us and among us, he is also the One who comes again to hear our accounting of our faithfulness to his charge to be witnesses to his power and love. If it is true, then we dare not let this season pass without renewing our vows to this Christ to serve him with our energy, our resources and our love for the most vulnerable of God’s children across this whole world for which he came.

Vernon Broyles III is a volunteer for public witness in the PC(USA)’s Office of the General Assembly.