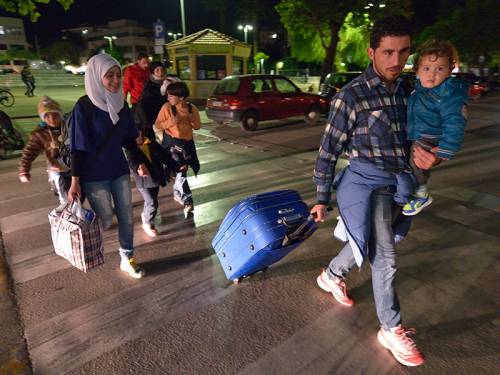 In recent years the number of people in the world experiencing forced displacement has been at its highest since WWII. Many PC(USA) congregations are welcoming them in Christ’s name. Paul Jeffrey, ACT

Loan Nguyen waited anxiously at the airport for the arrival of a Syrian family that had traveled 13 hours from Jordan. The family, displaced by war in Syria, had spent more than two years in a refugee camp, trying to find a new home. The couple and their two small children were entering a country they did not know, and they had no idea what to expect.

Nguyen knows the feeling well. Over 30 years ago, she and her family traveled to the U.S. from Vietnam.

“I remember being on a plane for so many hours. When we arrived, we were tired. It was a rainy night,” she said. “I was 6 years old and we arrived at Chevy Chase Presbyterian Church in a van. The church had food for us and toys to play with. Right away, I remembered the feeling of being safe. We weren’t running anymore.”

Chevy Chase is one of more than 1,500 PC(USA) congregations that provided some form of refugee support in 2016, according to Presbyterian Disaster Assistance. Congregations in 35 states and Washington, D.C., are engaged in refugee ministry. Approximately 2,000 congregations have asked for more information from PDA on how they can begin or extend their ministry with refugees.

The crisis took on new meaning with many Presbyterian congregations when President Donald Trump signed an executive order in January, suspending refugee admissions for a waiting period while security procedures were reviewed.

“Right now, more than 65 million people are displaced by war and persecution, and 30 million of those are children. More than 5 million Syrians are now refugees who cannot go to school, tend to their land, or raise their children in the place they know as home,” said the Rev. Jimmie Hawkins, director of the PC(USA) Office of Public Witness.

“They are spending months journeying, sleeping outside, paying smugglers for safe passage, and praying for a future for their families in a place that is safe from conflict. Our nation has historically stood for hope and welcome for those fleeing war and persecution. We cannot turn our backs on them now.”

The Farouk family arrived in Washington, D.C., and, to their amazement, received a warm welcome from members of the Chevy Chase congregation.

“We arrived here to this foreign land and, thank God, there were people to receive us. We did not know anyone, but they treated us like family,” said Adnan Farouk. “There was a sign with the word ‘Welcome’ written in Arabic for us. They even gave toys to the children so they could be happy after 13 hours of travel.”

Because their apartment was not ready when they arrived, the four spent two weeks with a church family. “We came here to a foreign country and didn’t know anyone. The church became our family. Seriously, we found a second family,” said Bana Farouk. 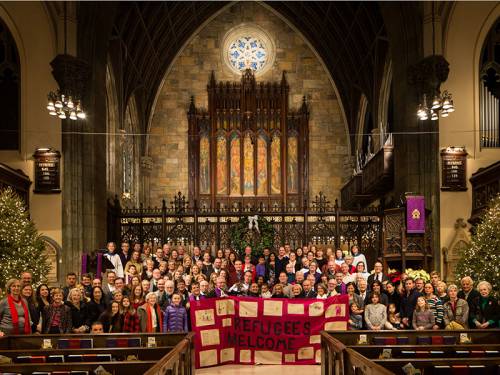 Willow Grove Presbyterian Church in Scotch Plains, New Jersey, has a long history of opening its arms to people seeking to start anew in the U.S. In the 1970s, the church also welcomed a Vietnamese family escaping the trappings of war in their homeland. Relationships with the family are still strong, according to pastor Cynthia Cochran-Carney. Last year the church welcomed a Syrian family seeking to escape the devastation of war.

“I think people here are quite sure what it means to sponsor a family,” said Cochran-Carney. “The congregation really feels our calling comes from Jesus’ words in Matthew 25. If people are hungry, need shelter and come from a place of conflict like Syria, we want to be part of a larger community effort to welcome them.”

Cochran-Carney was part of an interfaith group that formed Refugee Assistance Partners. The group continues to meet to learn what they have to do to be a host site.

Church World Service (CWS) opened an office in Jersey City two years ago to begin the process of resettling Syrian families and others in the state. CWS staff began meeting with the interfaith group to put the wheels in motion.

“Refugees are subject to the strictest form of security screening before they are allowed to enter the U.S. with extensive background, security and health checks,” said Cochran-Carney. “By the time a family is approved and comes to the U.S., they have been vetted and have gone through multiple background checks. CWS is one of the approved agencies.”

In the past two years, volunteers have collected numerous items for families, including soap, toothpaste, school supplies, backpacks and cleaning materials. All supplies are stored at a CWS facility in Jersey City.

“With the Vietnamese family, there were multi-generations coming with that group, so the congregation was prepared for an extended family,” said Cochran-Carney. “We are a small church of about 100 members, but we are very committed to missions and believe we are called to be involved in this.” 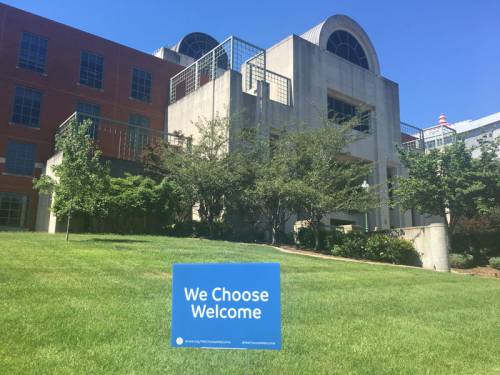 The “We Choose Welcome” campaign was launched by the Presbyterian Church (U.S.A.) in 2016. Search for it online with #WeChooseWelcome. PC(USA) photo

In 2015 the PC(USA) launched the campaign “We Choose Welcome,” committing to welcome refugees of all nationalities and faiths. The campaign is part of a larger effort involving other faith-based organizations and ecumenical groups, including CWS.

“Here in the U.S., congregations and local communities have embraced families and encouraged local communities to get involved through community celebrations and international festivals,” said Susan Krehbiel, catalyst for refugees and asylum with Presbyterian Disaster Assistance. “It is time for us to remember refugees and displaced persons in our worship and look for ways to advocate on their behalf.”

Krehbiel says the U.S. is struggling with what its relationship is with the world, and refugees are an integral part of that. She’s hopeful that congregations will pray for refugees as well as for people in power who are making decisions about refugees’ lives. Many congregations remain committed to helping refugee families but feel caught in the middle, concerned about repercussions from the national or local governments if they continue to support refugee families.

“I think a lot of congregations have been inspired to do more, and many have found their voice and conviction around their sense of call to refugee ministry,” said Krehbiel. “At the same time, there are some congregations that are nervous because this has been a part of their ministry for years and they feel caught in the middle.”

To fully understand the motivation for families to come to the U.S., look at where they are coming from, says the Rev. Dr. Laurie Kraus, director of Presbyterian Disaster Assistance. Kraus has made numerous trips to countries that have seen hundreds of thousands leave, including Syria and South Sudan. She’s visited refugee camps and traveled with Krehbiel to the U.S. southern borders to meet with families that have entered the country.

“We are reweaving a new Presbyterian interfaith community of support for refugees and immigrants in a moment in our world’s history that is as important and necessary now as it was when faith groups came together to respond to the refugee crisis at the end of World War II,” she said. “The tension of this political climate around refugees is just heartbreaking, and being able to build on our long history of welcoming refugees feels deeply important.”

Kraus has made two trips to Homs, Syria, a city devastated by the war that is now in its sixth year. The city has been left in ruins, yet those who have stayed behind are struggling to rebuild, even in the midst of continuing threats of violence.

“To have seen what we have seen, to listen to the stories that our partners are hearing from the refugees and displaced people they are supporting, is profoundly important at this moment,” said Kraus. “We’ve seen the sacrifices they’ve made, the cost of leaving everything and crossing rivers and mountains to communities and countries they don’t know and sadly find themselves viewed by some as a threat to the American way of life.”

Krehbiel says she’s inspired by refugees who continue to seek better lives through the most difficult circumstances.

“I tell people that my own patriotism has actually come from working with refugees because we often take the rights we have for granted, and they remind me of that every single day,” Krehbiel said. “They know what it means to have a government that doesn’t respect them and who challenges them because of their faith or ethnic background.”

Krehbiel says most people can’t imagine the challenges refugees and asylum seekers face when they arrive in a new country, seeking a new home.

“I liken it to thinking about the Israelites when they left Egypt — just going out there, putting their trust in God and others,” she said. “They don’t know what they will face. It is just a leap of faith. These families are really putting their lives in our hands.”

It has been a year since the Farouk family was welcomed by the Chevy Chase congregation. The church continues to minister to the family, helping them navigate the processes of opening a checking account, making doctors’ appointments and getting the children settled in school.

“Our Christian brothers and sisters have been there for us. I never thought of sorting people as Christian and non-Christian until this crisis came,” said Farouk regarding the war. “On the contrary, I only saw good things from them.”

“I need to do this to make sure we keep opening our doors to people who want to be here to create a richer community,” said Nguyen. “It is about loving and welcoming the stranger, loving your neighbor as yourself. Whether your neighbor is next door or across the world, it is about connecting.”