A true blessing to Lakota Indian reservation in South Dakota 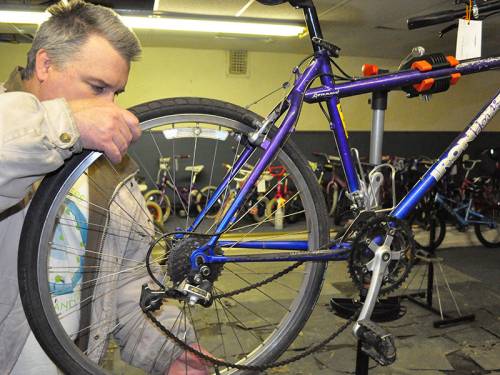 Glen Sanders repairs one of the many bikes that were donated to the Pine Ridge Reservation in South Dakota through the ministry of Calvin Presbyterian Church in Zelienople, Pennsylvania. (Robert Stubenbort)

For many years, neither Glen Sanders nor Robert Stubenbort knew they had similar passions. But once they found out they shared a love for bicycles, something special happened.

Sanders and Stubenbort, members of Calvin Presbyterian Church in the western Pennsylvania town of Zelienople, are the backbone of a new Bikes Mission that culminated with close to 130 refurbished bicycles and tricycles being personally delivered to a Lakota Indian reservation in South Dakota in late June.

All 126 bicycles were cataloged digitally by photo and description, allowing each bike to be targeted for a specific youth or adult prior to delivery. This avoided a hectic scene when the two U-Haul trucks packed with bikes descended on the Pine Ridge Reservation after making the two-day, 1,350-mile drive.

“God presented the need to us, and that need is not just the Native Americans who could use the bikes, but also involving youth and adults in the community,” Stubenbort said. “Our church has always been focused on praying and discerning what God is calling us to do. We have a heart for mission.”

Sanders learned firsthand 10 years ago how important a bicycle can be to someone living on a reservation. He and his son made the trip to see a college friend who had married a Lakota Indian and found himself with an extended stay because of car trouble. Seeing that they were living in severe poverty, Sanders asked his friend what their greatest needs were.

“She mentioned bikes,” Sanders said. “This would give them transportation for work, transportation to go to the store, and it also gives a lot of kids an opportunity just to own a bike.”

Sanders quickly recalled all the bikes he sees on trash day around his neighborhood and wondered if there was a way his community could donate their broken-down and outgrown bikes to this cause. Despite the good intentions, the idea never gained traction and soon fell by the wayside.

“There was this mission-centered drive, but at first when I shared it with different groups, it didn’t seem like it connected,” Sanders said. “It always stayed with me, but I guess it just wasn’t God’s time yet.”

Then three years ago, Stubenbort and his wife became involved in a five-day bike ride from Pittsburgh to Washington, D.C., to raise awareness for adaptive bikes for special-needs children. They learned that these types of bikes are extremely expensive and approached Calvin Church about donating funds for the initiative.

Sanders heard Stubenbort’s plea and saw the passion he had for bikes and for using bikes to help people. So Sanders approached Stubenbort about his idea to gather bikes for the Lakota Indians. While they were both agreeable, the idea lagged for some time before Stubenbort knew something had to be done.

Started in November 2015, the Bikes Mission has been accepting, collecting and repairing bikes from a wide range of sources. Stubenbort estimated they have worked with 150 bikes, some of which were used only for pieces to resurrect others. 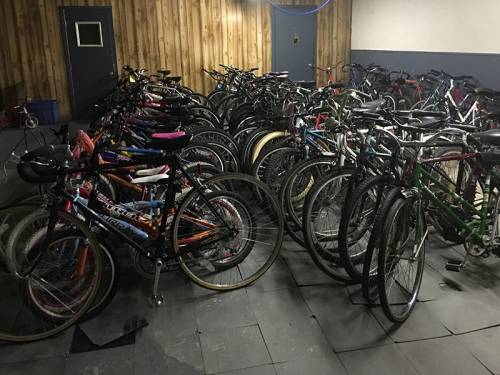 The basement of a Pennsylvania ice cream shop housed over 100 bicycles that were waiting to be transported to Pine Ridge Reservation in South Dakota. (Robert Stubenbort)

“We got bikes of all sizes, shapes and conditions,” Stubenbort said. “Some were in great shape and ready to go, some needed so much help, and some were going to be parts bikes.”

Initially, Stubenbort did many of the repairs in his garage and also stored the bikes there, but as the number grew, he quickly ran out of space. The church also housed some of the bikes, but that area also became too small in a short time. Sanders had a friend who owned an ice cream parlor with an unused basement, and that eventually became the main location where the bikes were stored and repaired.

“When Stubenbort got involved in this and was able to move it into a little bit more reality, it was the perfect time because everything fell into place,” Sanders said. “Every time there was a need, it seemed something happened that worked out for us.”

It was truly a community event as a local cycling club and students from two local colleges pitched in to provide some labor on the bikes. An area Girl Scout troop happily test-drove the bikes once they were repaired. And the youth at the residential treatment facility where Sanders works cleaned the bikes, numbered them for the cataloging, and crafted cards that were attached to the bikes. Each card included a blessing.

“We had a lot of different partners come together that wouldn’t normally work together,” Sanders said. “We had three different counties working together. It was a really interesting group of volunteers.”

Like the volunteers, financial commitments followed the need, including a Calvin Church member who stepped in to pay the upfront $4,000 U-Haul bill.

Sanders and his son made up half of the group of drivers and passengers who made the trip to South Dakota. They hope the trip will become an annual tradition. In the meantime, the trip has allowed them to see their vision come full circle.

“I was anxious and ready to do this 10 years ago,” Sanders said. “Time isn’t the same for God’s plans.”

Mike Givler is the communications coordinator for the Synod of the Trinity.