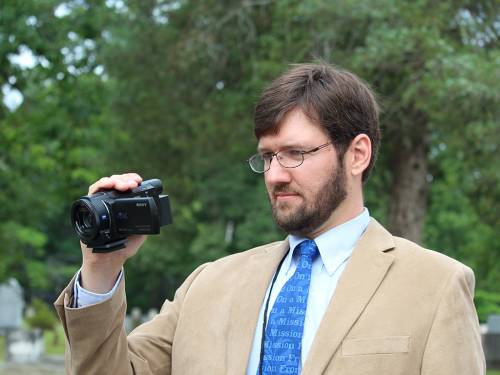 LOUISVILLE – The Rev. Evan Harrison of Sunnyside Presbyterian Church in Fayetteville, North Carolina, had an idea. Given to him by God, he says, through inspiration he received watching Presbyterian Mission Agency 1001 New Worshiping Community videos — and from what he saw happening in churches throughout the Coastal Carolina Presbytery.

“I’m taking a sabbatical in July,” he wrote in an email to Presbyterian News Service, “and [I’ll] use my time to capture stories of what God is doing in our presbytery, much as you all have so well captured the stories of churches in the 1001 worshiping community videos.”

Harrison was looking for some tips on inexpensive lighting equipment and techniques for covering people in a variety of scenes in a professional manner. Intrigued by the email — how many pastors do you know that take a sabbatical to create video stories from other churches? — we called Harrison to find out more about his project.

“God picked this as a special time in the life our presbytery,” Harrison said. “For God’s own reasoning. I can see God is doing something amazing; I want other people to see it too.”

The editing process and making short movies is “a hobby of mine,” Harrison said. He told the story about his first mock interview last week. He was interviewing the Rev. Deck Guess at Old Laurel Hill Presbyterian Church in Laurinburg, North Carolina, one of at least 15 stories Harrison hopes to tell.

“Guess was telling me an amazing story of a student at a local school who was going to be homeless during the winter break [and] how his congregation welcomed this individual into their personal homes,” Harrison said.

Old Laurel Hill helped the young man continue his education and when he is on break or wants to go “home” he goes to one of the families from Old Laurel Hill, which is like family to him.

As Harrison was putting his camera away, Guess said, “Oh I forgot to tell you about the Old Laurel Hillbillies church band.”

So, they started recording again, with Guess talking about the amazing bluegrass band that started organically in his congregation and how lit up the congregation is with smiles when they occasionally praise God this way in worship.

Then Guess started describing a 2,000-plate annual barbecue fundraiser, how people love it so much that even non-church folks volunteer to help put it on. He told how people who moved away come back not only to eat the barbecue but because it is such a treasured experience.

“He also told me about how one time the church did oil changes for single moms in the region [and] how some of them were moved to tears, realizing the church would change their oil for free, because they didn’t have the money to do this for themselves,” Harrison said.

As Harrison put the camera away for a second time, something remarkable happened. Guess looked at Harrison and said, “Wow, when you stop to talk about the ministry that is happening, it makes you realize God is doing a whole lot of things here.”

And that’s the point of Harrison’s sabbatical project. It’s so easy, he said, to just go along with regular life, hearing these kinds of stories and shrugging them off only to go back to “the whole church is dying and we have no hope” narrative.

“I’ve never seen churches reaching out to each other and working together more,” Harrison said. “God is doing something amazing in our midst. If people just hear these stories they will be inspired by them — just like the 1001 stories.”

Harrison and Guess have been through an intensive two-year transformation process with their congregations where they learned about adaptive change and how to discern new vision together. The “Communities of Practice” training was led by coaches George and Beverly Thompson, who have been working with the Coastal Carolina Presbytery on transformation since 2013. So far, eight churches in the presbytery have been through the “Communities of Practice” process.

The Thompsons also trained facilitators to work with churches in half-day listening sessions throughout the presbytery. Out of Coastal Carolina’s 180 churches, 109 have participated. The questions used at each session elicited hundreds of stories.

Harrison’s plan is to approach many of these churches to flesh out, record and share a select number of these stories. “That way,” said George Thompson, “their shelf life will be extended, their power to inspire spread around.”