When an alien resides with you in your land, you shall not oppress the alien. The alien who resides with you shall be to you as the citizen among you; you shall love the alien as yourself, for you were aliens in the land of Egypt: I am the Lord your God. — Leviticus 19:33–34

Do not neglect to show hospitality to strangers, for by doing that some have entertained angels without knowing it. — Hebrews 13:2 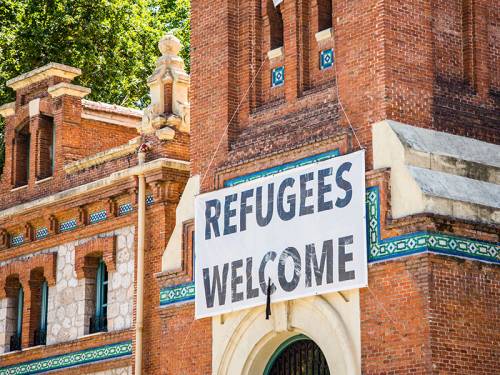 How many times will we confirm the cynicism of the atheist by declaring loudly that we love Jesus and worship the God of Abraham, Isaac and Jacob, but then turn away the children of Abraham and Hagar? How often can we say we believe in the God our Scripture claims is the father of us all, and turn away “outsiders” as if they are not God’s children too? How can we who claim to love Jesus heed the voices of those among us whose rhetoric consigns people of other faiths to eternal damnation or rejects them as unworthy to be our fellow citizens?

In the face of these realities, how shall we, in response to God’s clear mandate to show hospitality to the stranger, resist the fearful, racist, ungodly attacks that are being visited on so many who come seeking shelter on our shores?

The apostle Paul is very clear that as Christians, we are to be obedient to the civil authorities. He writes in Romans that the authorities are God’s servants for our good. Our Presbyterian heritage calls us to that obedience; but it also calls us to faithful resistance when the authorities no longer respect the image of God in people.

Each of us has to determine God’s will for our lives, including discerning when to be obedient to the civil authorities and when to resist, knowing that resistance ordinarily carries a penalty. Still, it is one thing to resist or submit when we are the ones at risk and another when we see some of God’s children being slandered or abused.

In the mid-1930s the German Protestant churches struggled with how to respond to growing authoritarianism. Some conformed and remained silent; others resisted. One of the most poignant testimonies is from pastor Martin Niemöller of the German Confessing Church:

Christ is risen! He is risen indeed! He awaits our response.

Vernon Broyles III is a volunteer for public witness in the PC(USA)’s Office of the General Assembly.