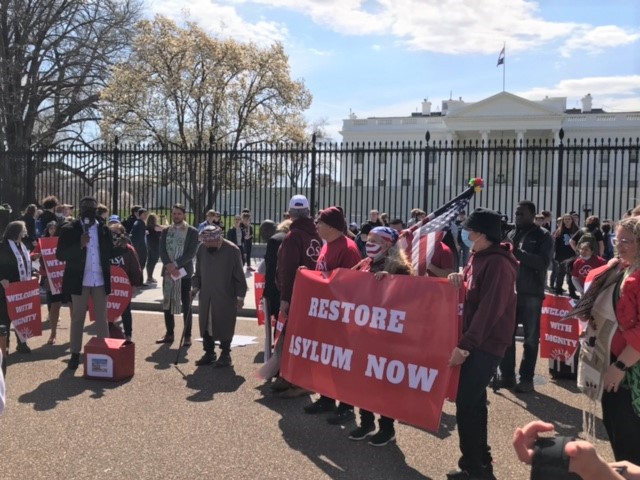 We are encouraged by the Department of Homeland Security’s April 1st announcement that expulsions at the U.S. border under the Center for Disease Control’s provision known as Title 42 will soon come to an end. At the same time, we are concerned that it is not expected to be implemented until May 23rd. For the last two years, PC(USA) has joined the interfaith community—in solidarity with the thousands of asylum seekers who are summarily turned back from our border without the opportunity to explain their need for safety—in advocating for the end of Title 42.

Pushing people back across the U.S. border to Mexico under Title 42 and the Remain in Mexico policy (MPP) has not led to more order. Nor has it deterred people from seeking safety at our borders. Instead it has subjected asylum seekers to dangerous conditions in northern Mexico, including thousands of kidnappings and assaults since these policies were put in place. We call on the U.S. Government to end the delays and capricious denials. It is time.

As people of faith, the PC(USA) has long called for the U.S. Government and individual congregations to welcome those who come to our borders. For years we have lifted up sacred texts and international law in our statements, asking that we might see the human dignity in each individual as children of God. This means that despite the way people arrive at our borders, and regardless of whether or not they qualify for some type of U.S. visa, we treat them with compassion and respect. We tend to the hungry, the sick and wounded, and the homeless. We demand that border patrol and all immigration officials lead with compassion and justice, not fear and hatred.

Time and again Presbyterians have stood up for and with our immigrant neighbors when we have witnessed disparate treatment due to racial bias and discriminatory policies. In 1982, both our PC(USA) predecessor denominations (PCUS and UPCUSA) passed resolutions for the protection of Haitian refugees in the U.S. as well as those being interdicted at sea. Now as then, we see Haitians denied the same basic rights to asylum that is afforded other nationalities. Today Haitians expelled under Title 42 are not only pushed back across the border, they are put on charter planes back to Haiti.

When the U.S. Congress passed an immigration law in 1996 mandating the use of detention and expedited removals for asylum seekers, the General Assembly’s response was clear in its rejection of these measures and the premise that harsh, punitive tactics are necessary.

More recently, in 2018 the 223rd General Assembly called on our government to end policies that separate families at the border. Little did we know that four years later family separation would continue to be a problem because of this pandemic-era policy! Faced with almost automatic expulsion, Title 42 has encouraged parents desperate to protect their children to consider sending them across the border alone. That same General Assembly resolution calls on all of us to remember “the Gospel call to work for just and humane policies for all immigrant communities, grounded in the principles of family unity, human dignity, and rights.”

This Holy Week, we will be remembering the death of our Lord and Savior at the hands of an occupied government and the rejection of his own community. And we will remember how in those final days His friends turned away from Him, refusing to challenge the authorities of His day. May we take a moment to remember those who are at our borders, fleeing persecution, injustices and threats to their very lives. May we not turn away from their plight. May we live up to the commitments we have made as a nation to be a safe haven for those in distress—including providing meaningful access to asylum at our borders.

God, we cried Hosanna, welcoming you into our midst. Yet too often we do not welcome people with a way strewn with palms and joyful shouts of welcome. Is it any surprise that our shouts of Hosanna quickly turned to “Crucify him”? Forgive us our refusal to be hospitable. Help us to welcome everyone as though they too might be God-in-our-midst. Amen.