A bi-monthly update from World Mission, a ministry of the Presbyterian Mission Agency

The Mission Matters column addresses the impact of Presbyterian mission in the world and the issues that affect mission co-workers, the people we walk alongside and assist in service to God, and our partners around the globe.

A little over a year ago, George Floyd died while being detained by police, and his death — captured on video — has changed the world. As Floyd’s young daughter said, her father’s death created waves of protests worldwide, with people becoming anguished and angry over the racist system that provoked his death at age 46.

Prior to Floyd’s murder, Breonna Taylor, a 26-year-old black woman was shot and killed in a middle-of-the-night police raid of her apartment in Louisville, Kentucky. Alongside each other, Taylor and Floyd’s cases of injustice have sparked uprising around the world, with protesters demanding that the public “say her name” or “say his name.” Suddenly, we saw more international sports stars from Formula One racecar drivers to Premier League soccer stars, kneeling on TV broadcasts to show their support for Black Lives Matter.

Protesters take to the streets in Medellín, Colombia. (Photo by Edwin Dávila)

Racism and poverty walk hand in hand, not only in the U.S. but everywhere. In the latest eruption of violence and heavily militarized repression by the Colombian government against protestors on the streets of Cali, Oscar Almario García, a historian and professor at Universidad Nacional de Colombia, said in an interview to the El País: “There is an open and bloody wound that is speaking loudly here, that is complaining about this denial and exclusion for centuries. To recognize the distinct ways of racism is one of the agenda items of this country.” Many structural problems have historically affected Colombian people’s lives and prevented them from experiencing the Shalom of God and the abundant life Jesus has promised.

The inequality expressed in these events in the U.S. and Colombia is interconnected and characteristic of the Latin American context. The U.S. empire dominates the continent, helping to foster the militarization of systems that perpetuate structural racism and deep impoverishment of ethnic groups and other minorities.

As the Presbyterian Church (U.S.A.) embraces the vision of Matthew 25 as an integral part of our missional DNA, the realities that surround our societies are profoundly troubling and bind us together as a people and a Church that recognizes:

There are structures in our society that all but guarantee that people living in poverty will stay that way. Systemic poverty refers to the economic exploitation of people who are poor through laws, policies, practices and systems that perpetuate their impoverished status. The root causes and the actors of this scenario may vary from context to context but share a racist construct of societies. In many cases, diversity is celebrated, but it has not been enough.

Racism is a complex issue that is interconnected with the globalization of capital and overlaps with many other social ills and oppressive structures in our society. The call to dismantle structural racism and its implication for classism is very relevant and can show up in multiple ways, including:

The witness of the Gospel becomes our collective call in raising our voices and attitudes, so the loving God we serve can be glorified. During the period of recent protests in Colombia and the brutal repression, the Presbyterian Church of Colombia expressed concern in a statement issued on May 8, through its Peace Commission. The statement said, in part:

“We will not grow weary of praying for our country and accompanying our brother Jesus in contributing to the construction of peace with actions that promote life. We invite each member of our church to work in their daily life for this purpose so that our dream of peace might be realized. Only with the country at peace, with justice and without violence, can we build a better Colombia for our children.”

The Peace Commission was created to contribute from a faith perspective to the promotion of peace as the inalienable right of the Colombian people, as enshrined in the nation’s constitution. It continues to express angst:

“We deeply lament the reality the nation is experiencing, moments of anguish, the people shouting in the streets over the injustices of an economic system, which has impoverished half the population.”

The Peace Commission also acknowledges that “The pandemic has profoundly affected each facet of our life, from health and psycho-emotional stability to the economy. Despite this critical situation, the government pushes reforms which at the political, social and economic level would affect a population ever more impoverished.”

Several ecumenical bodies and other organizations have joined in an “International Vigil of Prayer and Solidarity with Colombia.” This practice embodies four pillars of our mission today: solidarity, advocacy, prayer and accompaniment of the children of God in Colombia.

The PC(USA)’s statement about the unrest concludes, “We pray for the families who weep for the victims of violence in these days. May God illumine us with God’s love and wisdom that we might offer ourselves in the service of justice and transform the daily reality of the Colombian people.” 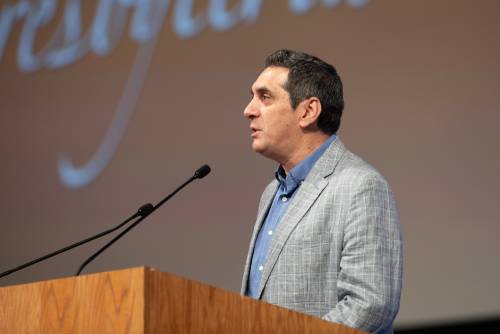 News and stories about international mission including reconciliation, poverty and evangelism | Delivered monthly