Bob and Kristi are periodically in the United States and available to speak to congregations as their schedule permits. Email them to extend an invitation to visit your congregation or organization.

About Bob and Kristi Rice’s ministry

Bob and Kristi began in January 2010 as mission workers of the Presbyterian Church (U.S.A.) in the Democratic Republic of Congo, where they served with the Presbyterian Community of Congo (CPC) as consultants and colleagues with an active involvement in visioning and implementing new initiatives in Christian education and evangelism, and assisting in the areas of reconciliation, care for vulnerable children, and helping community development initiatives seeking to lift up the poor.

In May 2017, they began a new role and call in South Sudan. Bob serves as a faculty member at Nile Theological College (NTC).  He teaches courses in Theology, Church History, and Discipleship.  His passion is to empower and equip emerging church leaders and to instruct them in a manner which is contextually relevant and helpful.  Kristi serves as an economic and development advisor for the South Sudan Presbyterian Evangelical Church. She supports the healing and reconciliation ministry of the church and the equipping of congregations to improve health and wellbeing in their communities. They live in Juba, the capital city.

In early 2011 the people of South Sudan voted to separate from the rest of Sudan and form an independent country. The referendum was part of a 2005 peace accord that ended decades of civil war between rebels in the South and government forces from the North. However, just two years later the country was engulfed by fighting when president Salva Kiir accused vice-president Riek Machar of attempting a failed coup. Government and rebels agreed to attend peace talks in Ethiopia in 2014, and a deal was finally signed under threat of UN sanctions against both sides in August 2015. An ongoing and increasingly brutal new wave of violence broke out in July of 2016 and has caused widespread famine. The conflict has displaced more than three million people.

About Bob and Kristi Rice

Bob brings a passion for equipping, empowering and mentoring leaders, for building up the church and for contextualizing the good news of the Gospel to local culture. Kristi’s gifting and passion lies with developing the economic and social capacity of the poor, training them in areas of community development and microloan and savings projects.  Bob and Kristi join with their brothers and sisters who are working to make a difference in the name of Christ. The Rices recognize that South Sudan will not be an easy place to live and serve. However, they are encouraged as the churches and partners there seek to be the light of Christ and a voice for peace in the midst of the suffering. The Rices write, “There is so much potential for the impact and reach of the gospel as Christians in South Sudan are coming together and identifying the body of Christ as their primary loyalty over tribe and ethnicity.”

Read: One Half-Step Out of a Hobbit Hole” (Unbound journal)

Bob and Kristi met in Rwanda in 2003, when Bob was serving in the areas of evangelism, reconciliation, and leadership development with African Evangelistic Enterprise (AEE) Rwanda, and Kristi was working with World Relief in their micro-finance institution. “Our time in Rwanda proved formative for both us. We were inspired by their faith and resilience … God touched our hearts, giving us a connection and love for our African brothers and sisters.” When they returned to the United States, they married, and Bob finished his Master of Divinity and M.A. degrees at Fuller Theological Seminary. He was ordained February 7, 2010, at Menlo Park Presbyterian Church in California, which had nurtured his faith since childhood.

Bob is a graduate of the University of Colorado with a major in economics and a minor in history. He is a minister member of the Presbytery of San Francisco.  Kristi is a graduate of Wheaton College, where she majored in business and economics. She earned her M.B.A. in international development from Hope International University in Fullerton, California.  They are thrilled to be part of the church community in South Sudan. 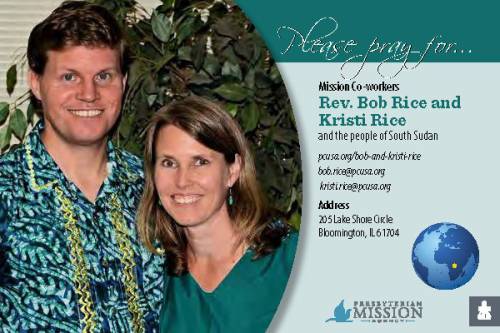 Use this card as you pray for Mission Co-workers the Rev. Bob and Kristi Rice. The card includes a photo and overview of their work.…

Give in honor of the ministry of Bob and Kristi Rice