A letter from Cesar Carhuachin, serving in Columbia

Individuals: Give online to E200425 for Cesar Carhuachin’s sending and support

Congregations: Give to D507559 for Cesar Carhuachin’s sending and support

In this time of many worldwide Reformation celebrations, in Latin America and Colombia we are holding various activities to commemorate 500 years of Protestant Reformation. Our church partner, the Presbyterian Church of Colombia (PCC), has been conducting numerous commemorative activities. The Central Presbytery and the Evangelical Lutheran Church of Colombia organized conferences in Bogotá (at University of Santo Thomas in 2015 and the University of Saint Bonaventure in 2017), Cali (at Baptist University in 2014), Medellin (at Pontifical Bolivariana University in 2017) and Barranquilla (at the Reformed University in 2013, in collaboration with our 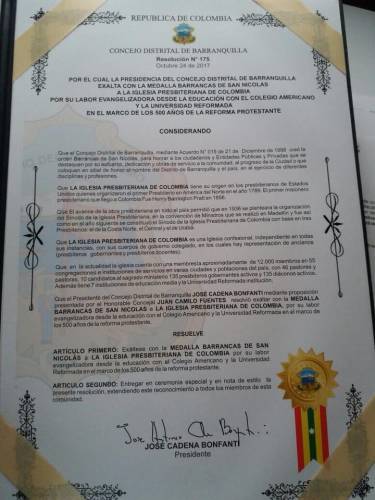 City Council of Barranquilla recognition of the Presbyterian Church of Colombia

school). In the Costal Presbytery, the Reformed University has been conducting numerous academic events since 2013: conferences, panel discussions, colloquia, symposiums and talks by international and local speakers. The Presbytery of Urabá participated in the Medellin event, celebrating the “Reformed heritage and challenge for social, mission and pastoral ministries.” Here all three presbyteries participated in worship celebrations that commemorated Reformed liturgy; thought; and emphasis on Scripture, Christ, Grace and Faith. There was even a “church band competition,” which required all songs to include Reformed content. I participated in this last event as one of the three judges, and I can say that each church band performed wonderfully, inspiring the congregation to worship God. 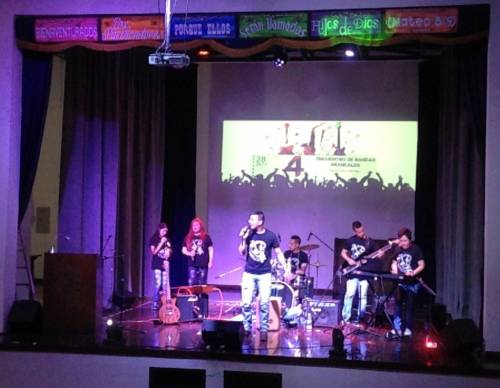 Not all news from here is positive, however. As many of you have seen on the news, peace agreement implementation is not going well in Colombia. In 2017, there have been more than 82 rural community leaders killed in areas where the FARC (the Colombian Revolutionary Armed Forces) used to have control. The government is investigating these murders but is not doing much in preventing them—simply distributing cell phones, cars and bulletproof vests is not enough. In the capital city of Bogotá, many politicians are focused more on political elections than on working together on the implementation of the peace agreements. Ex-FARC members show a willingness to comply with the agreements: they are relinquishing their arms; they have left territories that they controlled in the past; and they are making progress in entering civilian life. They are forming a political party to participate openly in politics. Challenges with the peace agreements stem from the Colombian government. 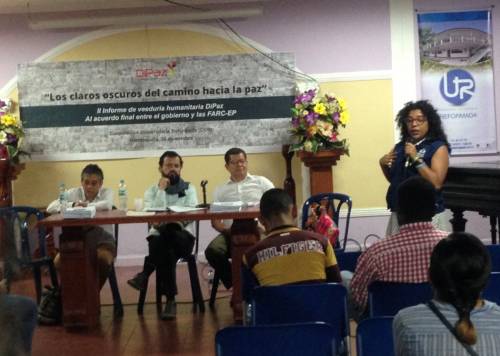 On October 30, the Colombian group DIPA (Inter-Ecclesial Dialogue for Peace) presented its “Second Oversight Report on the Implementation of the Final Agreement for the Termination of the Conflict and the Construction of a Stable and Lasting Peace” at the Reformed University. The PCC and the Reformed University of Colombia (RUC) are members of this group. From this report, we learned that less than 20% of the peace agreement has been achieved. Please join me in prayer for the implementation of the peace agreement in Colombia, that the power of the Holy Spirit might overcome all obstacles that are obstructing the path for peace.

Through its American School and the Reformed University, the Presbyterian Church of Colombia has contributed much to Colombian society. Well-known American School alumus Orlando Fals Borda brought esteem to the school through his influential work for social justice. Since its creation in 2002, the Reformed University has been focused on educating for life—not for war. It also provides scholarships to children of displaced families. On October 4, the PCC received public recognition from the Barranquilla District Council for its social testimony through evangelization through educational institutions, specifically the American School of Barranquilla (founded in 1889) and the Reformed University. This recognition was made official on October 31 with the presentation of the Medal of Barrancas de San Nicolas at the Ecumenical Worship Celebration of 500 Years of Church Reformation, which took place in the Reformed University auditorium. We praise God for the recognition of our partner’s commitment to evangelization through education. 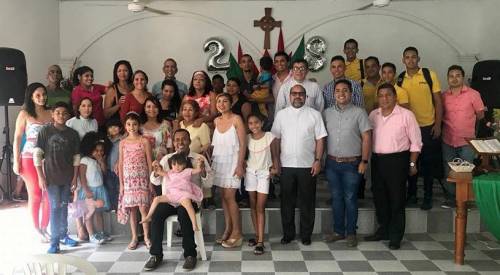 The Presbyterian Church of Cartagena (Coastal Presbytery of the Presbyterian Church of Colombia) celebrated its 28th anniversary on October 29. Located in the tourist city of Colombia, it is pastored by Rev. Angelica Munera, alumna of McCormick Theological Seminary and former professor of Old Testament at the Reformed University. The congregation evangelizes youth in its neighborhood through holding music classes, supporting low income families with imperishable food and providing pastoral counseling in crisis situations. The music classes help children stay away from gangs and drugs. Please keep Rev. Angelica Munera and her ministry as well as the Presbyterian Church of Cartagena in your prayers.

As you can see, the PCC is working for peace in a country with a culture of violence. And it has been working for many years to eradicate the roots of poverty through education. Let’s thank God for the testimony of the PCC and for the mission work of the PC(USA) that has been supporting our partner’s work in education and peacemaking.

I invite to check out my page at the World Mission site: www.pcusa.org/cesar-carhuachin. If you want to contact me, feel free to email me at cesar.carhuachin@pcusa.org. Your emails and messages mean a lot to me and make me feel supported.

Peace to you all,