Make Red Hands to say that children are children, not soldiers. 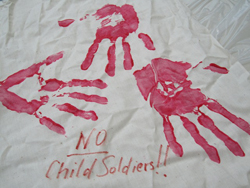 UNICEF estimates that as many as 300,000 children under age 18 are engaged in armed conflicts in various places around the world. This all takes place despite international laws which prohibit the use of children as soldiers. As followers of Jesus who welcomed children, Presbyterians have joined people around the world in an effort to change this situation: the Red Hand Campaign. The message of the Red Hand Campaign is clear. Red hand prints proclaim the message to the world—children should NOT be used as soldiers! Over 300,000 red hands have already been delivered to world leaders. The Red Hand Campaign calls for universal ratification and enforcement of the Optional Protocol to the Convention on the Rights of the Child on the involvement of children in armed conflict.