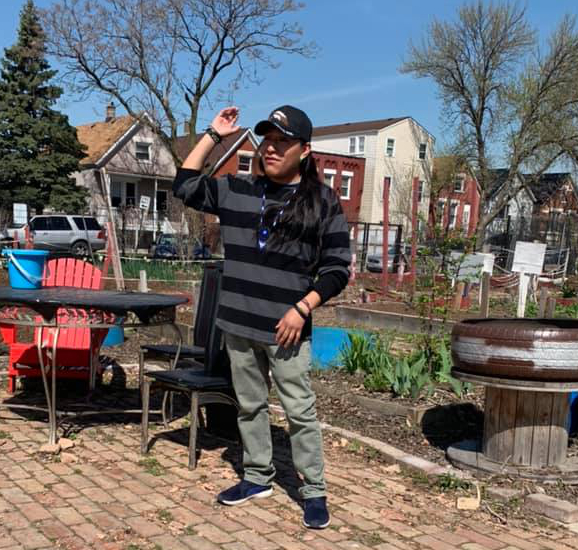 Vivi Moreno (in the four videos below) and Jorge Ortiz (right) are organizers with the Little Village Environmental Organization (LVEJO). They proudly showed PHP staff and advisory committee members the Semillas de Justicia (Seeds of Justice) community garden. These videos of Vivi give you the low-down on the garden, which has been going strong since 2014.

First, here’s a snapshot of what this amazing garden is about!

“…it was brought to LVEJO’s attention of a strong oil smell emanating from the site. It was then discovered that the fenceless site was being used to deposit leftover oil barrels. LVEJO organized with Troy street neighbors to demand that this site be cleaned up and transformed into a community garden. As a result of this struggle, and with gardening being a strong activity in the community, Troy garden now blooms with a variety of vegetables, fruits, legumes, and flowers for the enjoyment of the community. Our garden serves as a hub for intergenerational exchanges of organic food-growth practices taught by, with and for Little Village residents. Semillas de Justicia is now home to free community weekly dinners, bike repair workshops, and art classes for children in the summer; a Fall Harvest Fest, and several educational workshops on sustainability and climate adaptation throughout the year. Semillas de Justicia stands as a great example of community efforts to redevelop brownfields, and uplift green open spaces in Little Village and Chicago in general.”

In the 3-minute video above, Vivi tells the story of how Semillas de Justicia came to be.

Below, in the next three minutes, Vivi talks about who works in the community garden.  Many immigrants in the neighborhood – mostly from Mexico – have deep connections to the land and many have farming background.

Just after minute two, Vivi mentions the oil barrels that were buried where the garden is. Kim clarifies that the company that was paid to remove the barrels broke them on purpose to drain out the oil so they could sell the scrap metal! This likely wouldn’t have happened in an upscale white neighborhood, and so the charge of environmental racism is not unwarranted.

Below, Vivi talks about the groundbreaking in 2013 and the first harvest in 2014. Semillas is a very intergenerational space! Thirty plus families garden here and often you’ll see three and even four generations in a family coming to work their plots together.

Urban agriculture has its complexities. For starters, the existence of so many vacant lots is due to white flight from the urban core in the 70s and 80s. Add to this that the relationship to land, for immigrants who had to leave their homeland, is not without trauma. Vivi mentions the threat of gentrification and other potentially unhelpful trends in urban agriculture. She quotes Soul Fire Farm’s Leah Penniman, who recently visited LVEJO and said, “The land is not the perpetrator, but the land was used to harm us.”  The “us” being people of color. So, it is important that it is Spanish-speakers who really run things. Building community, establishing a connection with the land in this new place, and affirming agrarian and cultural knowledge are valuable parts of this work.

While we were there, Fermin Meza, a master gardener, arrived to plant some squash and pepper seedlings in his beds.  LVEJO supports the gardeners with seeds, tools and programs, but the gardeners themselves feel deep ownership of the garden. Vivi says  families are free  to grow things however they wish. She says, “They’re showing us what is culturally relevant here and it’s showing what community control looks like.”  (quote from article about the garden in the Reader)

Vivi described, in these final five minutes, the beautiful programs at the garden. The “jewel” being the weekly community potlucks that happen every Wednesday from the end of May until the first week of October. She describes how they compensate families to cook traditional dishes from different parts of Mexico. The learning curve for some has been around vegetarian cooking.  Right before the end of the video, Vivi tells a funny story about the chickens.

This is the seventh year for Semillas de Justicia and, on this sunny morning in April, many  gardeners were coming to plant and water, eager to get a jump-start on another season of ultra-local, healthy food! 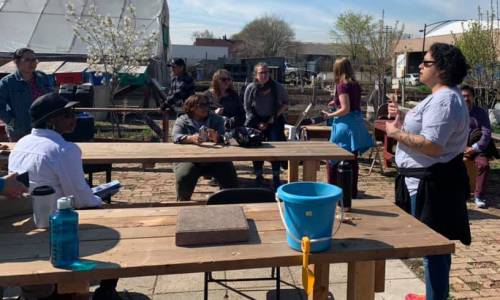 Kim Wasserman (right) is the executive director of LVEJO. In the next blog post, Kim tells the origin story of the community organizing efforts in Little Village and the birth of the Little Village Environmental Justice Organization. (coming soon)

Kim was with LVEJO and PHP staff and our PHP Advisory Committee in Chicago this April.

Since 2014, the Semillas de Justicia Community Garden has provided the space for young people to get involved and to learn about our food system. We’ve also had young children, ages 4-10, come garden with their parents. However, we are currently fundraising to create a bilingual children’s gardening program. During the gardening season, our garden is visited every week for more than 20 children. We would like to create an intentional space for our children to learn much like their parents, grandmothers and ancestors, to grow food in community.

Watch the video of children helping with the composting and donate directly here.