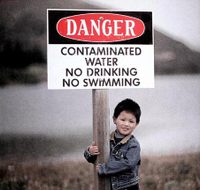 Today, I just can’t not write about pesticides! Sometimes the world screams at you about something specific. Right now, it is our tendency as a species to poison the very stuff that keeps us alive, the thin layer of nutrients covering this rock, Earth.

Society has generally accepted pollution and pesticides as necessary parts of the growth economy, with unfortunate side-effects. As we come to grips with the fact that the growth economy itself is scorching the planet, we are also realizing the effects are not side but center to some of our most challenging problems as a species.

Human Challenge #1 – Astronomical health costs and epidemics in modern diseases such as diabetes: A new study in the British medical journal, The Lancet, provides more evidence that pesticide exposure may play a role in the development of diabetes. And Cambridge University scientists are advocating for more research into the possible links between environmental pollution and type 2 diabetes.

In addition, a Swedish study of 380 men and women exposed to organochlorine compounds showed “a strong association with the occurrence of diabetes,” as did comparable research in Belgium. Studies of US Air Force Vietnam War vets also “suggest an adverse relation between dioxin exposure (via the defoliant Agent Orange) and symptoms of diabetes.”