What does it mean to say the Bible is our guide — and what if we don’t agree on what the Bible means? 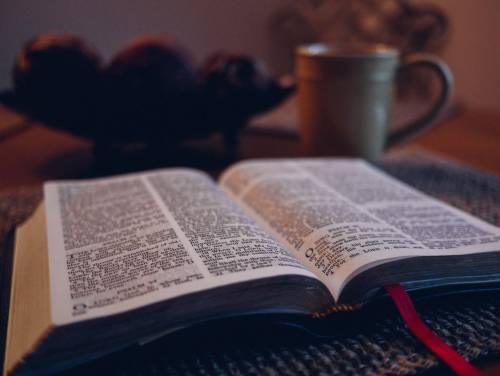 “You can prove anything from the Bible,” a person who knows little about the Bible assures me. As a Presbyterian minister with a deep respect for the Bible, I recognize that there is both truth and error in that statement. Error, inasmuch as the Bible obviously can’t be used to support every imaginable viewpoint. Truth, inasmuch as Presbyterians reach different conclusions on the same issue and support their conclusions with Scripture.

For some of us the message of the Bible is consistent from Genesis to Revelation. To say the Bible is inspired is to say it is accurate and factual–and therefore contains only one viewpoint, that of the Creator.

If other people arrive at different beliefs from reading the same Scriptures, it is obvious to us that the problem lies with interpretation.

Either the scribes who copied the manuscripts misinterpreted what they were copying and introduced error, or the person reading it is misinterpreting the meaning.

For others of us, the Bible can be used to support a variety of different beliefs and ideas because it actually contains, not a monolithic point of view, but different points of view. These differing ideas were expressed, not just by named writers, but by sometimes quite large groups schools of thought such as priests and scribes, cloaked by a particular name like Moses over a period of about a thousand years.

Battling about the meaning of the Bible is not new, not an innovation of the modern division between conservatives and liberals. There have always been a variety of different ways of interpreting Scripture.

The apostles themselves actually differed over the interpretation of key Scriptural passages. Witness the battle over circumcision in the story of Acts. Consequently there existed in the early church two quite opposing viewpoints, both strongly defended from Scripture. Jewish Christians, headed by James and Peter, had the clear testimony of Scripture that circumcision and the law of Moses were based on an “eternal” covenant, and therefore essential for salvation for not only Jews but also Gentiles. Paul taught differently. Eventually, at a conference in Jerusalem not unlike our General Assembly today, they decided to tolerate each other’s viewpoint, remaining in fellowship while agreeing on some points and disagreeing on others. As a result two quite different churches emerged, one distinctively Jewish and the other liberated from the law of Moses.

The great strength of Presbyterianism is its uncanny knack of fostering a fellowship in which people of different viewpoints continue to dialogue.

Not only in the same denomination but also in the same congregation it is often possible to find folks who believe every word of the Bible to be factual worshiping alongside sisters and brothers in Christ who treat the Bible as true in meaning but not necessarily factual, and still others who would not even agree that the Bible is wholly true in meaning, let alone factual.

None of these viewpoints contradicts our Presbyterian Constitution. The church is charged with giving full expression to the rich diversity within its membership. Our Constitution requires us to promote inclusiveness, which means including all the different theological positions that are consistent with the Reformed tradition.

What that tradition emphasizes is that while the Holy Scriptures are the only rule of faith and conduct, Christ is present with the church in both Spirit and Word. This means that before I can use any particular statements of Scripture as a guide in life, more is required than simply the ability to read. Otherwise I might read something that was never intended for me and subscribe to a practice that is contrary to God’s will for people in 1995. This is the mistake cults commonly make.

To handle the Word of God responsibly, Presbyterians have always stressed the importance of scholarship. All the way back to John Calvin it has been crucial that our decisions as a church do not rest on the understanding of Biblical novices whose knowledge of Scripture is only surface deep, but on the most thorough and scholarly search for truth of which we are capable.

In seeking to address any issue from a Biblical perspective, under the guidance of the Spirit, Presbyterians have found it incumbent upon them to ask penetrating questions of the kind the early apostles asked. To whom was a Scriptural injunction directed? Who wrote it, and why? What is the context? For what time period is it applicable? Are there Scripturally justifiable exceptions to the rule? How was the statement understood in its own time?

What our Constitution is saying to us is that isolating certain statements of Scripture and using them to prove a particular viewpoint is not kosher. While my right to private judgment is inalienable, so that I must listen to my conscience when it comes to determining the revealed will of God, conscience also requires me to listen to “the whole counsel of God.” In other words, if I am really to hear the Word of God for me today (I am not asked to hear it for someone else), I cannot be individualistic in my reading of Scripture. I need to remain in dialogue with the whole church.

We Presbyterians therefore believe in the importance of listening to each other when it comes to interpreting the Bible. No matter how alien a viewpoint may be to us on first exposure to it, we have a responsibility to hear it fully and not reject it out-of-hand.

This entails adopting the role of a student toward my sisters and brothers in the church. It means I must exhibit a willingness to try to see an issue through their eyes, rather than treating them with hostility because what they are saying contradicts my present understanding. As the Constitution expresses it, being Presbyterian means we exercise forbearance toward each other.

As a minister I am often asked what I believe in. The fact is, what I believe in has changed drastically in my 48 years. Some positions I once took a stand against, I now embrace; others I at one time accepted, I now reject. As they have shown   themselves willing to listen to each other on issues such as the ordination of women, a great many Presbyterians have changed their understanding quite drastically over the course of their spiritual journey.

The more grounded I become in the Protestant watchwords grace alone, faith alone, Scripture alone, the more I question the validity of a question concerning what I believe. I find significance in the order of those good Protestant words: grace first, then faith, then Scripture. My faith is the result of God’s gracious activity in my life, and not the other way around. What I believe in has become less important to me over the years than belief. More appropriate, it seems to me, is the question of in whom I believe.

My faith is not something I have to defend, as if it were a set of doctrines to which I must cling for dear life. It isn’t because I believe certain things that I belong to God; rather, I belong to God, and that leads to belief. I wouldn’t be giving up anything significant if most of the ideas that seem important to me and that I say I believe in right now eventually prove either in error or inadequate, and I have to modify them.

My spirituality would be unaffected because I don’t have to hold on to my beliefs; rather, the one in whom I place my faith has got ahold of me! That is the glorious message of grace.

Because I am secure in my confidence in God, I can now turn to Scripture with an open mind that is ready to be challenged, eager to question, keen to investigate. My faith is not staked on a particular interpretation of a passage of Scripture — it rests on God’s grace. So there is nothing to be afraid of anymore.

We Presbyterians believe in ongoing dialogue concerning the Bible because, to people of faith, no idea should be so shocking that it cannot be given a hearing. If our faith is genuine, we have nothing to fear from any quarter.

We do not feel threatened if an opinion we presently hold as Scriptural turns out to be a misunderstanding of the Bible. That is why we welcome what archaeologists, historians and linguists have to tell us about the Bible. We are willing to hear all sides of an issue, studying it closely from every possible angle.

I like being Presbyterian because it is a great relief not to have to be “right”! A reading of our confessions these past 2,000 years shows that even the greatest minds had only limited understanding — even got it wrong at times — and had to be updated. That means I can entertain the possibility that, as obvious as something appears to me, I might be wrong. It’s OK to be wrong. In fact, if growing in grace and truth means anything substantive, I ought to delight in finding out that some concept I have held to be true is flawed and requires modification.

Indeed, it is when we feel most sure of our viewpoint that — if we take the examples and warnings of Scripture seriously–we are most in peril. To return to the issue of circumcision, when Peter ate with and baptized uncircumcised Gentiles (Acts 10-11), everyone at the headquarters church back in Jerusalem knew he was wrong! They had not only the weight of a thousand years of tradition behind them to show that Peter had gone astray, but also direct, clear, incontrovertible statements of Scripture. But they had not counted on the Holy Spirit–that wind that blows where it wills, without asking our permission — which had an entirely different interpretation to put on those ancient Biblical texts.

What do Presbyterians believe about the Bible? We believe that through it God speaks to us–that it is inspired. For some, that means the Bible is inerrant. For others, it means that even though the Bible is culturally conditioned and not necessarily factual or even always true, it breathes with the life of God. In their limited ways, the ancients grasped something of the infinite that we need to hear and dialogue with today.

Above all, the Bible points us to the living Word, the Christ who is present in each of us in Spirit, inviting each of us to become the Word enfleshed in the steps of Jesus — what Paul calls in his first letter to the Corinthians “living letters from God.”

This article originally appeared in the April 1995 issue of the Presbyterian Survey (now Presbyterians Today).