The church is responding to the Syria-Turkey earthquake, GIVE NOW!
Make A Donation Click Here >
Home › What We Believe › Infant Baptism (2006 Version)

Infant baptism — it’s all about grace 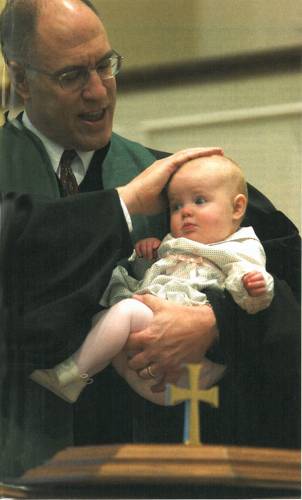 The overstuffed shoe box lay long forgotten in the back of a closet in my mother’s apartment, I ran across it while looking for something else. When I opened the shoe box, out poured more than I ever could have imagined.

Inside were letters recording four years of correspondence (1958–62) between my parents and the North Carolina Children’s Home Society, an adoption agency. The letters ended in February 1962—the month of my birth and my adoption. Four years of expectation and hassle, of yearning and hard work, of dutiful preparation and burgeoning excitement—all documented in that little shoebox.

Four years before I was even born, my parents were hard at work preparing a place for me. Even before I received my name, before I was baptized in our small Presbyterian church, before I could respond with the words “I love you,” my parents cared for me. In that shoebox was a history of love and grace that preceded any action on my part.

This discovery has given me an image to share with parents in the congregation where I am pastor, as we journey together toward the baptism of their children. Baptism is the church’s celebration of the fact that God has “shoeboxes” for all of God’s adopted children, meaning all of us. In infant baptism we visibly proclaim the central tenet of our Reformed faith: God’s grace towards humanity.

When we baptize an infant we testify that God’s grace acts on our behalf before we are capable of responding. The child plays no role except to be there, and must later be told what happened. Baptism is a clear presentation of work being done on the child’s behalf, for no other reason that that the child is loved — by the parents, by the congregation and most importantly by God.

John Calvin wrote that the sacraments (including baptism) are “a testimony of divine grace toward us.” God’s grace is seen most clearly in God’s action in Jesus Christ. In Romans 5:8 the Apostle Paul talks about this activity of God: “But God proves his love for us in that while we still were sinners Christ died for us.” Paul makes the bold claim that God’s grace acts on our behalf even when we have not earned, merited or deserved it. For as Paul states in Romans 3:23, “. . . all have sinned and fall short of the glory of God.” We deserve only God’s rejection of our sin. But in love God reaches out to us through Christ. This is one of the core affirmations of Scripture (see also Hosea 11, Isaiah 40 and 1 John 4:18–19) and a hallmark of Presbyterian and Reformed theology.

The clearest witness to grace

Infant baptism is the only sacrament that unambiguously testifies to the grace that precedes our human response. The Lord’s Supper and adult baptism testify to us of divine grace, but not in as single-minded a manner as infant baptism. Their witness to a grace that is undeserved is muted at best.

In adult or believer’s baptism, which involves a profession of faith by the baptized person, we celebrate not only the grace of God but also the faith of the person being baptized. The baptism occurs at the point when a young person or adult professes a belief in Jesus Christ, renounces sin and promises to live a new way of life as part of the community of faith.

God is the primary actor in this story, from a theological standpoint. But visually and ritually the sacrament centers on the candidate for baptism. The celebration sends mixed messages about the relationship between God’s grace and human response — especially in the context of today’s pull-yourself-up-by-your-bootstraps culture. Observers of the sacrament could conclude that because the person being baptized makes a profession of faith and renounces sin, he or she has earned the right to baptism. If so, the visible action of the candidate for baptism overshadows the invisible, preceding action of God’s grace.

The sacrament of the Lord’s Supper presents a similar opportunity for misunderstanding the nature of God’s grace. There is an ongoing debate in the Presbyterian Church (U.S.A.) about “fencing” the table — in other words, about how “open” the Lord’s Supper should be. Traditionally faith and baptism have been required of those wanting to partake of the sacrament. At various times in history the church has established other prerequisites for coming to the table, such as requiring Communion tokens or confession before Communion. Even the liturgy suggests an action by us (trusting Christ) is necessary in order to participate: “This is the Lord’s table. Our Savior invites those who trust him to share the feast which he has prepared.” In a culture that emphasizes the “I earned it” nature of life, the testimony given by adult baptism and the Lord’s Supper to the reality that God’s grace precedes our response is at best like looking through a glass dimly.

The importance of visual images

We live in a visual world where symbols are important. Images about achieving our own success bombard us — from the latest get-rich-quick video series to the proliferation of self-help books in the mall bookstores. These images promote the belief that we are the “captains of our fate” and the “authors of our lives.” This focus on individual achievement runs counter to the biblical story of a God who acts mightily to save us.

In infant baptism, we testify to the world that God acts lovingly and graciously on our behalf before we have a chance to respond. This testimony reminds us that we are loved in spite of our brokenness. In a culture steeped in the symbols of “works righteousness,” the practice of infant baptism provides a clear and practically unambiguous visual image of God’s “grace.”

Our congregation has adopted a practice from our Reformed brothers and sisters in the Church of Scotland that emphasizes the visible nature of God’s grace in infant baptism. Before the words of baptism, the pastor looks at the infant and says:

[Child’s name],
For you Jesus Christ came into the world:
For you he lived and showed God’s love;
For you he suffered the darkness of Calvary
And cried at the last, “It is accomplished”;
For you he triumphed over death
And rose in newness of life;
For you he ascended to reign at God’s right hand.
All this he did for you, [child’s name],
Though you do no not know it yet.
And so the word of Scripture is fulfilled:
“We love because God loved us first.”
— Book of Common Order, Church of Scotland

Does infant baptism make the baby a Christian?

Technically, no. God’s grace is the saving action. Infant baptism is a witness to that grace, but does not hold magical powers to save. Thus, we do not believe that unbaptized infants are either doomed or saved. Salvation is the work of God.

Why is baptism done as part of a worship service?

The child’s parents and the congregation make promises to nurture the baptized child in the Christian faith.

Is anything expected of the child?

In promising to share with the child the good news of God’s grace in Jesus Christ, the parents and congregation hope that the child eventually will come to trust those claims and promises, and publicly profess Jesus Christ as Lord and Savior.

Full-immersion baptism in the Atlantic Ocean is not common — but neither was the family that requested it for their son. 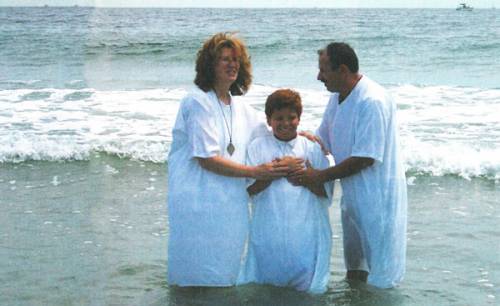 8-year-old John Bento, shown with his parents, was baptized in the Atlantic Oceans. Photo by Thiago Bento

Martha Grace was in a quandary. What should she wear to her next baptism? After all, it’s not every day that a Presbyterian minister in the United States is asked to do a full-immersion baptism in the Atlantic Ocean. She wanted attire that would convey the seriousness of the occasion, yet she needed something practical for wading in the waves. What to wear was just one of the things Grace had to think about when asked to baptize 8-year-old Johan Bento.

The first thing she had to resolve was whether the baptism was something she could do according to the Book of Order. Assured it was an acceptable form of baptism, she and the Bento family prayed about the idea and then took it to the session. Not all of the elders at West Side Presbyterian Church in Englewood, N.J., favored the immersion baptism, but the request was approved.

Because West Side is a diverse church with Latino, Caribbean and Indian worshippers, Grace is used to being confronted with different ethnic traditions. There was no question in her mind that she should do her best to honor the Bentos’ baptism request.

“It felt like the right thing to do for these people,” she explains. “They don’t take anything about God or church lightly. Their being present with us has been inspiring. They are change agents as spiritual people. They have opened everyone’s eyes and hearts to the way God works.”

Johan’s parents immigrated to the United States from South America in 1996. Ademir Bento and his wife, MariaValdi, were baptized by immersion in a Brazilian river in 1987. Since then, they have felt God’s presence in their lives. They remember their own baptism.

There were 12 of us in total. All in white gowns, symbolizing the purity found in our Savior,” MariaValdi explains. “It was a marvelous experience to remember. To know and feel we were forgiven and born anew to Christ, in Christ. It did not take long before we began experiencing the power of God in our lives.”

Once the weather and timing seemed right, Grace, Johan, his parents and 25 other people carpooled to Ocean Grove, about a half-hour drive, for the baptism.

Johan’s father brought short white tunics that were worn over swimsuits, making the event a little more formal than another baptism taking place simultaneously a few hundred yards up the beach (members of that church opted for swimsuits and shorts). A church elder gave them crosses to wear and Ademir helped with the immersion.

“Helping the Reverend Grace baptize my son in a place of such beauty to behold is truly inspiring. There’s simply no words to describe what we felt as a family that day,” says Ademir.

As for Johan, he will always remember his baptism and the change it’s made in his life. “Now that I am baptized I’m no longer a simple person,” he says. “I was born again in the name of Jesus, God and by the Holy Spirit.”

This article originally appeared in the March 2006 issue of Presbyterians Today.