#GivingTuesday – Join the PC(USA) in responding to a world in need! Give now!
Make A Donation Click Here >
Home › What We Believe › Hell

What Ever Happened to Hell?

It isn’t the burning issue it used to be, but it is an undeniable part of Christian tradition 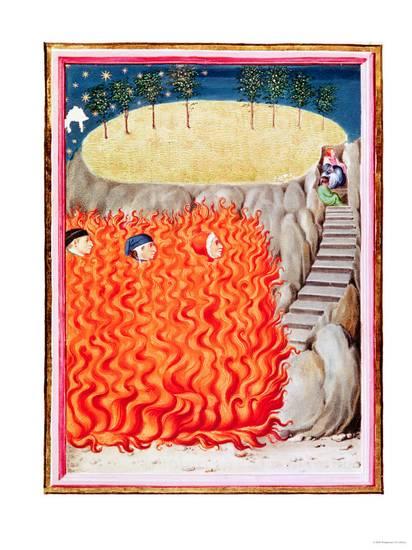 Growing up, I was the only kid on my street with a mother who was damned. You couldn’t tell it by looking at her, but everyone knew. It was a small town and everybody knew everything about everyone.

She never smoked and didn’t drink, except for an occasional Tom Collins. She did dance; I know because I’ve seen old black-and-white photographs of her in high heels and dark lipstick, with dresses belted around her tiny waist. That was in the days when she and my father, as they say, “went out.” My mother got damned (the polite term is excommunicated) for marrying my father, not for dancing with him. He was a non-Catholic who wouldn’t raise his children Catholic. This was back in 1957, when that was enough to do it. This meant not only that she was barred from confession, from Communion and from the “true church,” for all time and eternity, but also that she couldn’t go home.

I knew Mom’s excommunication from the Roman Catholic Church hurt her. And it worried me.

Her father, my grandfather — who let her come home when I was born, a year later — kept a bound copy of Dante’s Divine Comedy on his living room coffee table, full of verse, which I couldn’t read, but also full of lithographs, which I didn’t need to read to understand how awful it was in hell. There were legs jutting out of smoky pits, vats of tar. There were contorted bodies writhing in flames, twisted into tree limbs or frozen in hell’s deepest depths. There were hopeless eyes watching the poet Virgil on his long descent; and there was terror on the poet’s face as he, in some prints, tiptoed past anguish so deep he couldn’t bear to look.

But hell isn’t the burning issue it used to be. It is examined more in movie theaters than in mainline churches, where nowadays it is barely mentioned. Whatever understanding most churchgoers have about hell comes from the perspective of Renaissance poets, not preachers or church school teachers.

Unpleasant as it may be, however, hell is an undeniable part of Christian tradition and cannot just be ignored. So what have we done with hell? Where did it go?

With the advent of space telescopes and moon landings, most folks gave up the once popular idea that hell is geographically located beneath the earth, with heaven above it. Further, the notion of hell as literal terrain full of fire, smoke and whatever brimstone may be has fallen on hard times. The church’s confessions devote few words to hell. The Westminster Confession–once the arbiter of all things Presbyterian—says the “souls of the wicked are cast into hell, where they remain in torments and utter darkness, reserved to the judgment of the great day.” It also promises “everlasting destruction from the presence of the Lord and from the glory of his power.”

The Larger Catechism goes on to consign sinners to the “most grievous torments in soul and body, without intermission, in hellfire forever,” which, needless to say, includes “everlasting separation from the comfortable presence of God.”

But most preachers, who much prefer thinking of themselves as tellers of good news, hardly speak of hell. In a 1996 Presbyterian Panel survey only 51 percent of members and 46 percent of pastors said they believed in hell.

Hell has always been theologically troublesome, because it goes straight to the question of who God is: How do grace and judgment, or love and justice, mix in the divine mind? Are unrepentant sinners ultimately separated from God, the source of all life and hope, which is torment enough, or are they, literally, tortured for eternity? It is hard to talk about hell because this is hard stuff to talk about, but also because the Scriptures are not clear.

“It’s a theological problem,” says Brian Blount, associate professor of New Testament at Princeton Theological Seminary. “God is all-forgiving and all-loving, but might cast some people into a lake of fire. Theologians have been working on this for a long time.”

While poets may write about a hell chock-full of fallen angels and hopelessly wicked sinners who are scheduled for unimaginable and endless torment, the Biblical narrative is more ambiguous. Jews had no concept of the soul until encountering Persian influences in their Babylonian exile and the Greeks’ highly evolved mythology. Zoroastrian tales of the cosmic clash in which goodness and light ultimately overwhelm evil and darkness were integrated into Jewish tradition as a way of offering relief to people living in captivity. The Hebrew underworld, Sheol, was seen much like the Greek Hades, where the dead rested after life, although admittedly tyrants rested less well there.

There are only two clear references in the Hebrew Bible to punishment for the wicked. Isaiah 30 condemns tyrants to “a burning place” and Daniel 12 condemns the sinful to “shame and everlasting contempt,” without further details.

Anticipation of an accountable afterlife does not appear common until the period between the Old and New Testaments. New Testament writers picked up images like fiery lakes and winnowing forks from the later Jewish writings to make the point that it matters how people live.

The actual words hell or Hades appear only about 25 times, and they offer different views of what goes on there. Sometimes hell is a place where those who oppose God reside, with much weeping and gnashing of teeth — depicting separation from God as intolerable in and of itself. At other times hell is seen as more dire, and definitely penal. There are angels in chains in 2 Peter, and the lake of fire in Revelation, where sinners may either writhe in flames forever or be destroyed by the fire itself. Scholars still argue about the texts that can be read either way: hell as punishment or as destruction.

Paul is not much help either. While he is clear about there being behaviors that keep people out of the Kingdom, he is not very precise about what happens next. He talks much more about the life of the blessed than any kind of punishment — teetering, his critics say, on a kind of universalism that calls for the reconciliation of all things.

“It’s just not there in the Scriptures,” says Eugene March, longtime professor of Old Testament at Louisville Presbyterian Theological Seminary, speaking of a Dante-esque hell ruled by Satan to punish the wicked. He argues that contemporary readers often impose concepts on Biblical texts. “A hell in the sense that we talk about hell is a concept of the Middle Ages. Once you have that notion of hell, you may read about the ‘lake of fire’ or Gehenna (a garbage dump outside Jerusalem that burned perpetually) and say, ‘Oh, that is what hell is.’ But the text does not support it.

“What you begin to get is a notion of some form of punishment for the sake of justice.” March believes the Biblical writers were looking for ultimate divine justice as a response to their own history of injustice and suffering.

But when Augustine systematized these theories in the 400s, he created a view of hell that became the standard for the Roman Catholic Church and just about everyone else — a penal hell, where sinners are justly punished, not destroyed, and where repentance no longer does any good. There was also a literal heaven and a purgatory, where sins may be expiated through penance.

Calvin and Luther both adhered to a strong view of hell, but Calvin at least was no literalist. He wrote: “Many persons … have entered into ingenious debates about the eternal fire by which the wicked will be tormented after judgment. But we may conclude from many passages of Scripture that it is a metaphorical expression … Let us lay aside the speculations, by which foolish men weary themselves to no purpose, and satisfy ourselves with believing that these forms of speech denote, in a manner suited to our feeble capacity, a dreadful torment, which no man can now comprehend and no language can express.”

“In The Institutes Calvin takes these things as metaphors, as poetic images,” says Mark Achtemeier, assistant professor of systematic theology at Dubuque Theological Seminary, who dismisses medieval talk of primordial and sadistic dungeons. “Calvin takes pains to point out that this is not intended to soften the point. These powerful metaphors, if not literal, express something that is every bit as awful as they depict.”

The one consistent theme tucked inside all these centuries of theories and Scriptural metaphors is that hell is separation from God, whether you think of it as an actual place or as a state of being. This is how Pope John Paul II interpreted the Roman Catholic Church’s catechism, to much controversy. Foremost, hell is estrangement and alienation of the worst kind.

Whether you believe that hell is a fiery pit ready-made for unrelenting torture or not, the point is, sin is dangerous. But what happens in hell, whatever or wherever hell may be? Based on his study of Scripture, Blount says, “Though fire is a consistent image, there’s no telling what goes on.”

The New Testament witness was to proclaim the good news, not the bad. “The apostles,” Achtemeier is clear, “didn’t go out preaching, ‘You’ll burn in hell unless you repent.’ That is not what came first in the Biblical witness.

“And we moved away from hellfire preaching.” But perhaps we moved too far, Achtemeier suggests, so that we lost a sense of God’s majesty, which Calvin never did. The consequence, he believes, is the creation of a God who never says no.

Theologian William Placher, who teaches at Wabash College in Crawfordsville, Indiana, worries that people today do not take seriously the idea of either hell or sin. “We’ve fallen into the modern heresy,” he says, “that we’re all basically pretty good people who don’t need comeuppance. If we really thought more about our sin–if we really thought about people starving around the world while we’re living in the midst of plenty — we’d worry more about God’s grace to forgive us.”

The only official Presbyterian statement that includes any comment on hell since the 1930s is a 1974 paper on universalism adopted by the General Assembly of the Presbyterian Church in the United States. It warns of judgment and promises hope, acknowledging that these two ideas seem to be “in tension or even in paradox.” In the end, the statement concedes, how God works redemption and judgment is a mystery.

The Bible does not give clear and detailed answers to our questions about what happens after death. What we can know for certain is that God’s grace is as real as God’s judgment–and just as incomprehensible. If we can say at least this much with conviction, then maybe scared little girls who wonder about hell won’t have to look just to Dante for help.

This article originally appeared in the March 2000 issue of Presbyterians Today.