Christmas Joy Offering – Supporting our leaders: past, present and future.
Make A Donation Click Here >
Home › What We Believe › Faith and Patriotism

When faith and patriotism collide

What is the relationship between our faith in Jesus Christ and our loyalty to our country? 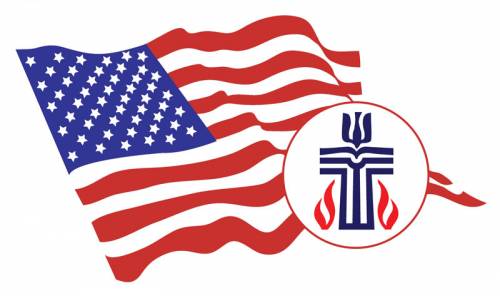 Is there a U.S. flag in your sanctuary? How long has it been there? What does it mean?

National Public Radio reported that within less than 48 hours after the September 11, 2001, attacks in New York and Washington, Wal-Mart had sold over 164,000 U.S. flags and the Kroger grocery chain had completely sold out. Since that time the flag has turned up in every conceivable place and form: on flag staffs and vehicle antennas, as “do-rags” for the head, as shirts and blouses, and even as underwear. U.S. flag-display protocol aside, this phenomenon has placed squarely before people of faith in the United States the question of how their religious faith relates to their loyalty to the nation.

And that brings us back to the flags in the sanctuary.

Another response in churches was the singing of “God Bless America” as part of Sunday worship, often at the end as a kind of benedictory refrain. That also created consternation for some, for those who feel that only Christian hymns and anthems are appropriate in Christian worship.

These developments place before us the fundamental question of the relationship between our faith in Jesus Christ and our loyalty to our nation. And that in turn is the foundation for discerning the relationship that ought to exist between the church and the state as institutions of society.

The New Testament is perfectly clear in regard to the first issue. Those who speak of “balancing” their faith in Jesus Christ with their loyalty as American citizens simply do not understand the gospel. First Corinthians 12:3 lifts up what is considered the earliest Christian creedal statement: “Jesus is Lord.” Under Roman rule everyone, regardless of their religion, was bound, under pain of death, to declare, “Caesar is Lord.” Christians could not pledge that kind of allegiance to Caesar without rejecting Jesus Christ as Lord, and many were executed for their failure to do so. Even Paul, who exercised in court his right of Roman citizenship to appeal his case to Caesar, never wavered in his understanding that his allegiance to the civil authorities was limited by his absolute loyalty to Jesus Christ.

For the Jewish religious leaders of Jesus’ day the answer to the question of loyalty to God or Caesar was the same. While they had made certain accommodations to the Roman occupation, any devout Jew knew that to affirm that “Caesar is Lord” was blasphemy. It is ironic that when the chief priests sought to get rid of Jesus — both a religious and political threat — and Pontius Pilate seemed to be wavering in his judgment, they responded to his question, “Shall I crucify your King?” with the shout, “We have no king but the emperor” (John 19:15).

Affirming our loyalty to Jesus Christ as our only Lord leads us to the ways our Presbyterian tradition has understood the relationship between the church and the state as institutions of society. At the heart of that understanding is Paul’s teaching on the role of the civil magistrate in Romans 12:14-13:7, the interpretation of those Scriptures by John Calvin and other Reformers, and the guidance found in our Book of Confessions.

Paul asserts that the role of the civil magistrate is instituted by God; moreover, Presbyterian policy and practice have always lifted up public service as a high calling. John Calvin even referred to it in these terms: “Wherefore no doubt ought now to be entertained by any person that civil magistracy is a calling not only holy and legitimate, but far the most sacred and honorable in human life” (Institutes of the Christian Religion).

Inasmuch as those who carry civil authority are God’s servants, they are to be obeyed. One of the marks of a “good Christian” in the Reformed tradition is responsible participation in the life of the civil society and obedience to its proper edicts and laws. On the other hand, Calvin says Paul also makes clear that those in authority are charged by God to use their authority for the ordering of human life and to the end that “men (sic) breathe, eat, drink, and are kept warm.” This is critical for understanding our history as Presbyterians in dealing with those in authority, especially where civil authority is not used for the common good.

John Calvin wrote his Institutes of the Christian Religion as an exile, having fled for his life because of his earlier writings about people in authority. Ironically, he dedicated the Institutes to the French King from whose realm he had fled. John Knox came to Geneva as a fugitive, having escaped from a ship where he had been consigned as a galley slave for rebellion against the Crown. Presbyterians throughout the Colonies were so prominent in the American Revolution that the English king often referred to it as “that Presbyterian rebellion.”

How could these Reformed Christians call for obedience to the civil authorities on the one hand and engage in rebellion on the other? The key is the God-given role of the civil magistrate, as described in Romans 13. When civil magistrates do not use their authority for the good of the people or use their authority to oppress the people they have been ordained by God to serve, they are to be resisted. Our loyalty to God trumps our allegiance to every civil authority when their edicts and actions run counter to our understanding of what God requires in terms of justice, truth and ultimate loyalty.

Because we live as Reformed Christians in this tension between obedience to civil authority and critical evaluation of it, we have strongly supported the separation of church and state as institutions. While this does not mean that we have put our faith aside as Christian citizens, it does mean that we have not only felt free to challenge those in authority but also have resisted efforts to impose the beliefs of any particular religion, including our own, upon the whole of society through the use of governmental authority.

Whether church-state relations are appropriate or inappropriate is not dependent on the way a particular nation or state is governed. The church has been co-opted by governments of every type, from dictatorships to monarchies to genuine democracies. On the other hand, the church has often stood firm against those same types of governments when they have failed to be “God’s servant” for the good of the people.

It is the job of the church to see clearly the “idolatries in church and culture” that we are called to “unmask” (Brief Statement of Faith). The pastor of one of our large Presbyterian churches, preaching in the aftermath of 9/11, raised the question, “Are we going to take off our WWJD (‘What Would Jesus Do?’) bracelets and replace them with the American flag?” We may well wish to wear both, but we should never be in doubt as to which one deserves our highest loyalty.

Strong allegiance to a person’s own country is a good and important virtue, but as Christian patriots we fulfill our proper responsibility in both roles when we are rooted in the knowledge that the Cross of Jesus Christ stands high above the flag of every nation, including our own. From that stance we can challenge every earthly authority to remember that they serve at the pleasure of a God who is just and merciful and requires the same of them. In this way we render our greatest service to both God and country.

One place where the struggle over church-state relations has been most evident in recent years is in efforts to enact legislation establishing “charitable choice” or “faith-based initiatives.” Churches long have been able to provide social services in partnership with governmental agencies through the establishment of 501(c)(3) charters, which are designed to prevent inappropriate church-state entanglement. The new CC/FBI initiatives have been framed in such a way that, in the judgment of many, churches would actually be agents of the government but also be free to urge their particular religious beliefs on those to whom they provide shelter, day care, drug counseling, job training and other services. While those who support such legislation argue that this would not be the case, concerns over the potential entanglement of church and state have left this initiative in “legislative limbo.”

Regardless of how this legislative debate comes out, our Reformed tradition suggests that while cooperation between church and government in meeting human need is appropriate and desirable, critical distance between the institutions of the church and the state is essential. It is important for the ability of the state to function on behalf of all the people, whose personal beliefs may be quite diverse, and also for the church as it lifts up to the state God’s requirement that “justice roll down like waters, and righteousness like an everflowing stream” (Amos 5:24).