The church is responding to the Syria-Turkey earthquake, GIVE NOW!
Make A Donation Click Here >
Home › What We Believe › What Presbyterians Don’t Believe

You may be surprised by What Presbyterians don’t believe

In recent years a large number of people have joined the Presbyterian Church by transfer from other denominations. They may not have considered some of the contrasts between their former tradition and the Presbyterian heritage. Others who have been Presbyterian all their lives have picked up a fair amount of their religious ideas, not from church school, but from notions floating about in the culture at large.

Over the years Presbyterians Today has included many articles on “What Presbyterians believe.” In this issue we offer a series of brief explanations about what Presbyterians don’t believe — not to be antagonistic, but to mark off some of the distinctions between our perspective and those with other viewpoints.

American popular religion supposes that the good people go to heaven and the bad people go to hell. If you have done a good enough job being righteous, you will be rewarded in heaven after you die. So the question is, are you good enough? Although there is a certain commonsense logic to this, Presbyterians have always insisted (following the apostle Paul) that no one is good enough. We are saved only by grace. Despite our failure, God decided to save us through the incarnation, death and resurrection of Jesus.

Various Eastern religions propose that when you die, you are reborn as another person or animal. All the world has been on an endless cycle of death and rebirth: you continually get “another chance” until you finally get it right. Presbyterians argue that Scripture does not teach reincarnation; it points us toward eternal life in the presence of God. Moreover, believing in reincarnation is a very severe form of believing in works righteousness, because reincarnation teaches that you must live your life over and over until you have attained to a level of goodness that frees you from the rounds of human existence.

Some believe that every event may be caused by previous events. If so, it is an illusion to suppose that your decisions actually change anything. If you do a good deed, that is what you were fated to do. If you do something evil, that is just the outworking of your predetermined fate. This is different from the Presbyterian doctrine of predestination, which says God chose to redeem us, long before we could even understand what that might mean. Because God chose us before the foundation of the world, that means we are predestined to life. That does not take away our ability to choose; we make many trivial-but-free choices every day. Beyond that, predestination teaches us that God has given us a new and bigger freedom: the freedom to fulfill our destiny.

In Holy Communion we receive the presence of Christ to strengthen our faith and life. How does that happen? The Roman Catholic view is that the substance of the bread and wine is transformed to become the substance of the body and blood of Christ. (Transform the substance: trans-substantiation.) Presbyterians argue that Christ is genuinely present in these elements, but it is a spiritual presence, rather than a physical presence. That is, it is not a question of molecules of bread becoming molecules of human flesh. Instead, it is Christ coming to dwell within us, as he promised to do.

An altar is a place where a sacrifice is offered and it is often viewed with special reverence. In the traditional Roman Catholic understanding the priest re-offers Christ on the altar as a sacrifice to God. Presbyterians believe the sacrifice of Christ has already been offered once for all, it needs no repetition, and the action of a priest cannot make it occur again. In the Presbyterian view, therefore, the Lord’s Supper takes place at a table rather than an altar. Although many Communion tables are rather ornate, the table itself holds no particular significance or holiness; it is simply a supper table.

Where do people go when they die? We expect the answer to be “heaven or hell.” Yet in the Middle Ages people thought: “Hmmm, if heaven is where the saints stand in the holy presence of God, and hell is where the wicked get sent, what about all of us sinners who have been forgiven? Our lives are still impure when we die; how can we exist in heaven, alongside the holiness of God?” So the doctrine of purgatory was created — a place where the remainders of our sinfulness would be purged away. This was a worthy speculation, but Presbyterians believe it is not necessary. God will indeed redeem us and cleanse us from all our sins and we will be readied for heaven without our needing to postulate a third possible place to go when we die.

Ah, but what about unbaptized babies who die? The medieval argument ran this way: They never got a chance to grow up and become wicked, so it seems unjust to condemn them to hell. There is no point in sending them to purgatory to purge away their sins, because they did not live long enough to commit any. On the other hand, they were not baptized, so they cannot go to heaven. They must end up in some fourth place, limbo, instead. Presbyterians give an answer parallel to the one regarding purgatory: God will take care of this, and we do not need to speculate on yet another place in the afterlife.

Where does the authority of the church reside? Roman Catholic, Lutheran, Orthodox, Methodist and Episcopal churches believe it is carried in the office of the bishop. Bishops receive their authority from previous bishops, all of whom received their authority from still earlier bishops. Catholics and some Anglicans trace this authority back to the apostles themselves. Presbyterians believe church authority is not carried in individuals this way; rather, church leaders can declare the will of God only on the authority of Scripture.

Praying to saints/praying to Mary

When you have problems, you may ask your friends to pray for you. But why restrict yourself to present-day friends? Why not also ask radiant Christians from previous centuries to offer up their intercessions on your behalf? This is perhaps the most positive way to think of praying to the saints. Yet there is a problem here. Asking Saint Joan to pray for you becomes praying to Saint Joan. But praying is an act of worship and devotion, and this can be offered only to God.

In Roman Catholic thinking when you die you are carrying the guilt of all the sins you have committed since your last confession. If your sins are venial (relatively slight), you will now work them off in purgatory. A mortal sin, in contrast, cannot be resolved in purgatory; an unconfessed mortal sin means you are damned to hell. Presbyterians do not believe that sins can be graded this way. Sin is sin. Forgiveness is God’s free gift in Christ. Confession and assurance of pardon are not what enables God to forgive us, but rather what enables us to recognize or feel or experience that we are forgiven.

Beliefs about the Bible: Yes to authority, No to inerrancy

Presbyterians have always had a very strong doctrine of biblical authority, but historically most have shied away from calling that doctrine inerrancy.

Inerrancy is a word that points to complete factual accuracy. It is easy to assume this must be the right word to describe Scripture since it is the Word of God and therefore must not have any mistakes in it. But this reasoning does not quite work, for a couple of reasons:

1. While you can apply the idea of inerrancy to a history quiz, it is hard to see how to apply it to a work of art. An inerrant quiz paper is one in which all the answers are factually accurate. 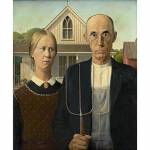 But what would it mean to apply the term inerrancy to a work of art like “American Gothic”? What do you think when you look at that painting? Perhaps it is “How determined farmers are, in the midst of life’s adversities!” But it is not “Ah, now I know what this particular couple looked like.” We recognize that a great work of art often “says something” that has little to do with an exact reproduction of “the facts.” It would miss the point to argue for the inerrancy of a masterpiece.

The poems, songs, parables and sagas of the Bible are literary masterpieces. For example, the Parable of the Good Samaritan: Jesus made up this brief yet poignant story to answer the objection of the lawyer who asked about eternal life. Defending the inerrancy of this story misses the point. The point is to obey the authority of the story.

In order to be inerrant, the factuality of a statement has to be able to stand on its own: “The Battle of Gettysburg took place in 1863” is true or false on its own merits. Contrast this with Psalm 103:3 telling us that the Lord “heals all of your diseases.” Or Jesus declaring that he “was sent only to the lost sheep of Israel” (Matthew 15:24). Or the description of final judgment that tells us “all liars” will end up in the lake of burning sulfur (Revelation 21:8). If the term inerrancy can be applied to these statements, then they can stand on their own, and we can believe with confidence that they are the truth.

Does the Lord heal all of our diseases? Was Jesus sent only to the lost sheep of Israel? Will all liars be cast into the lake of fire? We may want to quibble at this point and say, “Well, you have to view those statements in their context in order to see what they really mean.” If we say that, we have given up on the doctrine of inerrancy: we have conceded that these verses cannot stand on their own, with their plain meaning to be accepted as the truth.

The doctrine of authority, in contrast, focuses on the whole Bible, rather than particular texts. With regard to topics like healing or inclusiveness or final judgment, this doctrine prompts us to ask, “What are all the verses that talk about this? How do they fit together to form one cohesive Biblical teaching? And how do I follow that teaching and live it out in my life?”

This article originally appeared in the May 2003 issue of Presbyterians Today.